The Center For Inquiry is beginning an ad campaign of their own this week, letting people know “You don’t need God — to hope, to care, to love, to live.”

The ads can now be seen in Washington, D.C. on 15 buses and at two Metro stations. Billboards will go up in Indianapolis and Houston beginning on March 7th.

It’s a great message (though I’m sure the graphic designers in the audience will provide plenty of backlash). But as I’ve said before, the “nice” campaigns simply don’t get the type of attention the more aggressive, in-your-face campaigns do. FOX News isn’t going to pounce on this story. Bill O’Reilly isn’t going to be blowing his top. Stephen Colbert isn’t going to make fun of this. No meme is going to start as a result of the campaign. (I’d love to be proven wrong, though.)

But this isn’t about getting people angry or upset.

Our message is about the lives of the nonreligious, or, put another way, we’re addressing God’s relevance, not God’s existence.

CFI maintains we can have fulfilling lives without religion. The proof is right in front of us — in the lives of millions of people who have rich, rewarding lives — lives with hope, care, and love — without resort to religion.

We’re not trying to convert anyone by this campaign, if conversion implies persuading people there is no God. We are trying to prompt people to consider and converse about some of the myths surrounding the nonreligious, in particular the myth that life without God means a joyless, meaningless, selfish, self-centered life. That’s false, and we hope (there’s that word again) that a not insignificant number of people will come to realize how ridiculous such a view is.

That’s a lot to ask for out of a billboard or bus ad. While I hope for the best, I fear that the religious response to “You don’t need God — to hope, to care, to love, to live” will be “No, but you need God to stay out of Hell!” And if that’s the reaction, how effective can it be? 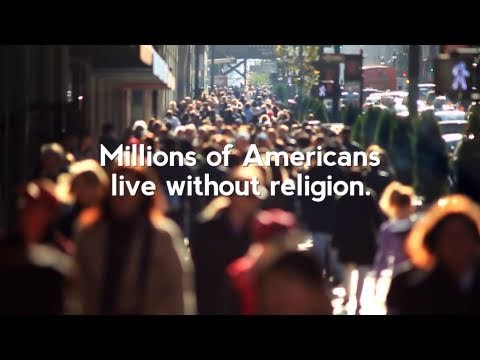 From an organization that once promoted a very controversial Blasphemy Day, though, this is a decidedly more moderate approach, and I’m sure a lot of atheists will appreciate it.

I just don’t think the media will care.

***Update***: Some commenters are asking why I’m “negative” or opposed to these ads. I’m not. I think they’re great. I’m only saying the media won’t pay as much attention to these as other, more aggressive campaigns.

And that’s important. These billboards are ultimately all about publicity regardless of what the press releases say.

You don’t spend tens of thousands of dollars on ads so that you can only reach Houston or Chicago or Indianapolis. You want local campaigns to become national ones. If the only coverage you get is local, the ad really wasn’t worth it.

Now, if local atheists find out they are not alone, or local religious people “discover” that you can indeed be good without a god, that’s a different story. Maybe that’s worth the price of the ad. But most of the atheist ads that have gone up have had two (unspoken) goals — raising the consciousness of atheists and theists locally and getting media attention anywhere.

American Atheists has gotten the most publicity for their ads. Did it change anyone’s minds? I don’t know. But they got their viewpoint across over numerous interviews. I count that as a success.

The United Coalition of Reason didn’t always get *massive* publicity, but their “Good Without God” ads did increase attendance at local atheist groups’ meeting. That’s a success, too.

But the trend lately has been: the more in-your-face the ad is, the more likely your message will be heard by a national audience.

You want the governor to complain about your ad (like one did in Iowa).

You want the subway authorities to change their policies because of your ad.

You want people to complain over things that are actually trivial.

You want airtime devoted to you.

You want parodies of your ad to be made.

If those things don’t happen, it’s hard to quantify whether your ad was worth its cost.