There’s a debate on whether veganism is truly Humanistic taking place at the Humanist Network News.

I’m betting none of you have an opinion on this.

Humanist values, as I understand them, put a premium on health, animals, and the environment. Humanists should be able to suffer some inconvenience to reduce their carbon footprint and their cruelty footprint. Doing the right thing can sometimes be difficult, but it shouldn’t be in this case. When wondering how you will give up that turkey sandwich you love, remember that taste is not your top priority. But also remember that five or six different meats pale in comparison to a plethora of fruits, nuts, beans, vegetables, and spices that can make absolutely delicious and nutritious meals. Aside from an infrequent B12 requirement, no animal products are necessary for human diet.

Eating meat is bad for you, the environment, and especially the animals. It’s certainly worse than not eating meat. Don’t subordinate important values for things like taste and convenience. Humanism should be about being the best humans we can be, not asserting our human dominance by breeding, exploiting, torturing, and slaughtering animals. Go veg.

Fred Edwords reasons that you can be both a Humanist and an omnivore:

So if anyone has the idea that humanity somehow took a moral wrong turn when it started eating other members of the animal kingdom and wearing their skins, feathers, and scales then they’re effectively declaring that a conflict exists between righteousness and survival. Which, from a humanist moral perspective, makes no sense.

Where does this leave the moral argument for a meatless diet (not to mention a lifestyle without leather and other animal materials, and even one without house pets)? Only here: that because animals suffer as we do, then our sense of empathy might well be extended to them in a manner that would reduce or end needless suffering.

That’s the key: needless suffering. Our prehistoric and historic ancestors had survival issues that made animal use needful. And even today populations living in certain climates, such as the Inuit in the arctic, simply can’t survive without hunting and fishing. (Moreover, ethical animal experimentation is a current necessity of our modern survival and thriving, and psychologists tell us that certain house pets are good for our emotional well-being.) But it’s often easy enough in many cities and farms today to live vegetarian or vegan so as to reduce that suffering by contributing as little to it as possible.

Fred also suggests that we could reduce needless animal suffering by reducing the human population… so bring on the birth control!

I still have a hard time accepting that there’s such a thing as “humanely killed” meat. I’ve heard your responses but it still sounds like an oxymoron to me.

I’ve already spoken my mind on the issue so I’ll just leave you with this video:

(***Update***: A lot of commenters say this video isn’t a fair representation of what goes on in most cases and it was unfair of me to include it in this post. Reading through the comments, I have to agree with them. My apologies; I’ll try to be more fair next time. Instead of removing the link, I’ll keep the video here for the sake of context.) 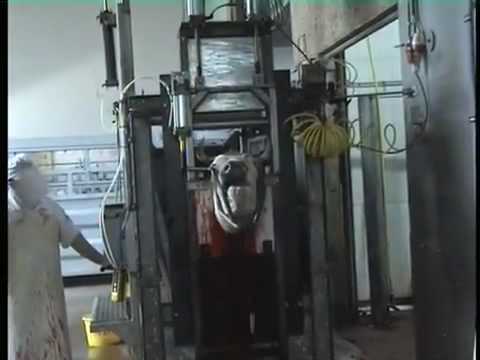