Fascism is alive and well in the United States of America. Politicians and religious leaders usually use dog whistles to spread its word. However, what would an ad for fascism look like if we made the implicit explicit? 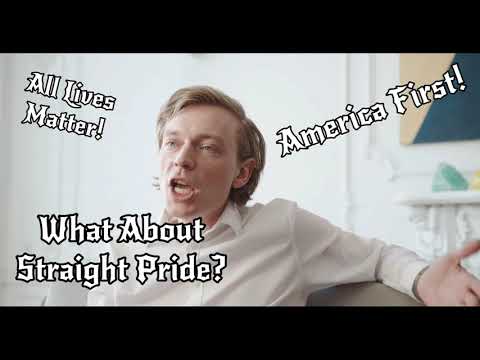 We made this video because a lot of people don’t know what the dictionary definition of fascism is. There seems to be quite of few folks who believe you can have a functioning democracy and fascism at the same time, or that fascists are protectors of freedom.

Regardless, here is the definition of fascism:

Fascism: a political philosophy, movement, or regime (such as that of the Fascisti) that exalts nation and often race above the individual and that stands for a centralized autocratic government headed by a dictatorial leader, severe economic and social regimentation, and forcible suppression of opposition.

Chris Mallard from The Daily Atheist Morning Show did the voice over!

I have to hand it to Chris. I had a draft of the script and he amped it quite a bit.

Here is the original wording:

Today’s world is confusing, and there’s too much information for one person to make sense of it all.

Let’s face it, if you can’t figure out high-interest milk, then how can you be expected to make political decisions that influence a country of 325 million?

Fascism is the political, social, and economic system for today’s world.

The Merriam-Webster dictionary defines fascism as

a political philosophy, movement, or regime that exalts nation and often race above the individual and that stands for a centralized autocratic government headed by a dictatorial leader, severe economic and social regimentation, and forcible suppression of opposition.

Choose this ideology and life will be easy.

Under fascism, you won’t have to worry about pesky choices like who in your country is entitled to basic human rights.

Did you ever look at someone who uses really big words and think, “I wish liberals would just disappear?” Well under fascism your dream will come true.

And if you’re concerned if this form of authoritarianism will be up to your high standards, don’t worry. American fascism with be the best in the world because it’s been endorsed by Jesus.

Thanks for reading and watching. Please subscribe to the channel!