Keith Lowell Jensen is an atheist and a stand-up comedian. In this video The Lock In, he discusses the odd intersection between God, atheism, and dating. 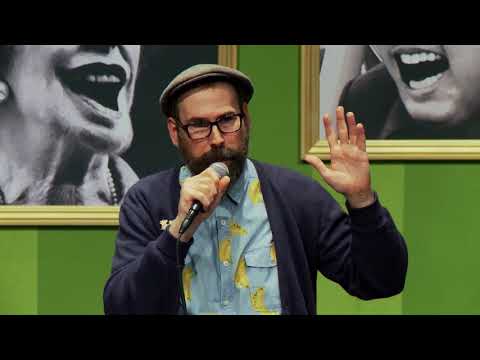 The clip is from his comedy special Bad Comedy For Bad People.

Here’s the synopsis of the special:

When Keith Lowell Jensen started a Twitter account for his daughter, he didn’t expect @MaxTheTiger to gain an international audience. Then again, he probably never pictured having the “death talk” with li’l @MaxTheNecromancer as his small, ardent atheist tried to Lazarus a froglet. And even that one wasn’t as odd as learning a thing or two from the comprehensive “sex talk” his wife and several organic, fair trade bananas laid on their nephew. On his latest release from Stand Up! Records, Jensen considers the ethics of incarceration and homelessness, presenting a vegan yet still modest proposal and explores the capitalist response to teen depression (mainly through mall sales of Joy Division shirts). He even reasons that, if we learned anything from the Civil Rights Movement and the music that grew alongside it, gay marriage’s “slippery slope” is leading us to a better, kinder, future in which an aging, yet still wise and witty Jensen spends his dotage tending bonsai trees, building model railroads, and personally fellating all his male friends.