My guest is David Niose, and we’re going to discuss his recent Psychology Today article Are Americans Just Stupid?

Here is an excerpt from the piece:

Perhaps that thought arose last week as you watched the cringe-worthy presidential debate, which pundits have called “a disgrace” and “an embarrassment for the ages.” Our public discourse has been in decline for so long that it was bound to come to this, right? Effective self-government requires an intelligent and engaged public, and it seems the American electorate falls woefully short. With large segments of the population brazenly rejecting facts and science – whether the issue is climate change, evolution, the coronavirus, or the latest conspiracy theory – it’s no surprise that social and political dysfunction are rampant.

Seen this way, it’s tempting to chalk up the clown car of American democracy to the collective intellectual deficit of its population. In truth, however, there is little evidence to support the notion that the American people are stupid. Objective measurements of intelligence can be controversial, raising questions of true objectivity and cultural bias, but it is difficult to find any that suggest Americans are lacking in IQ compared to those in other countries.

In case you aren’t acquainted with David, here is his bio:

A lawyer who has litigated cases all over the country, including numerous constitutional cases on behalf of the AHA, Niose has also worked in print and broadcasting media and taught both history and law. He has written extensively on a wide array of issues for numerous publications, including Salon, Huffington Post, Truthout, Washington Post, and many others, and has appeared on numerous national and local media outlets discussing legal and political issues. Niose is the author of Nonbeliever Nation: The Rise of Secular Americans (Palgrave Macmillan) and Fighting Back the Right: Reclaiming America from the Attack on Reason (St. Martin’s Press). He also blogs for Psychology Today.

Upon joining the AHA board in 2005, Niose initiated and helped develop the AHA’s media campaign. Niose has spoken to groups around the country, emphasizing the importance of utilizing mass media to inject humanist ideas into the public dialogue, improve the public image of humanists, and sway public opinion away from the religious right.

His speaking interests include church-state separation, humanist activism, anti-intellectualism, media and journalism, religion and philosophy, and culture war issues. Honorarium terms can be discussed on an individual basis.

Check out the video. We covered a lot in only 30 minutes! 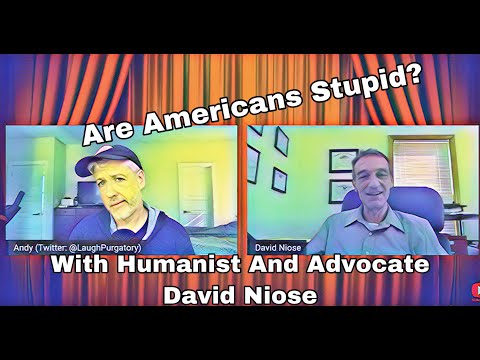