John Funk runs the YouTube channel Atheist Incorporated. He recently debated young-earth creationist Kent Hovind. I wanted to sit down with John and talk about it.

Here is a slice of Kent Hovid’s bio from RationalWiki

Hovind promotes young Earth creationist and Christian dominionist views in lectures and videos sold or publicized through his Creation Science Evangelismorganization (despite having no legitimate[note 2] degree).

Hovind created The Hovind “Theory” to explain how the global flood got all the water — namely, a magic comet did it. Hovind then proceeded to ignore all scientific evidence on dinosaurs gathered this side of 1960. Not satisfied with this record of failure, in 2001, Hovind started Dinosaur Adventure Land, an amusement park in his backyard.

Hovind subscribes to strawman theory, which holds that the government can’t touch you because “KENT HOVIND” and “Kent Hovind” aren’t the same. No, really. This “sovereign American” nonsense (and his support of tax protesting) understandably hurt his case in court. Hovind also promotes numerous anti-governmentconspiracy theories, literally connecting “evolution, Communism, the New World Order, and the IRS“[3], and has even sold books promoting anti-Semitism.[4]

John and I  chatted for about an hour. 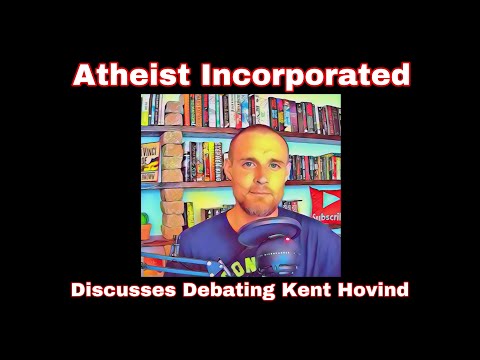 Here’s the link to the Atheist Incorporated channel:

Check out the Atheist Store