Green Party Candidate for President Howie Hawkins is sitting down and talking about the Green Party’s vision for the United States of America. This is going to be a live stream. If you are watching the show live on YouTube, then you will be able to ask him a question or comment in the chat. If you can’t catch the show live, you will still be able to see our conversation.

Here is his site and his bio:

A retired Teamster, Howie Hawkins is the original Green New Dealer, the first US candidate to campaign for a Green New Deal in 2010.

Howie is also one of the original Greens in the United States, having participated in the first national meeting to organize a US Green Party in St. Paul, Minnesota in August 1984.

As the Green Party’s candidate for governor of New York in 2010, 2014, and 2018, each time he received enough votes to qualify the Green Party for a ballot line for the next four years.

Outside of electoral politics, Howie has been a constant organizer in peace, justice, union, and environmental campaigns. 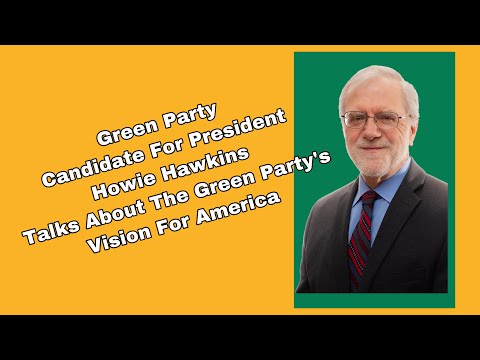 Here’s an update. Howie did not show up. There may have been some confusion with his people.

This is the email I got.