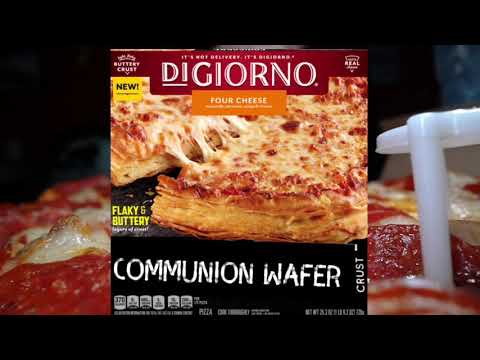 Pizza pie for the angels!

DiGiorno offers up a wonderful selection of frozen pizzas for hungry customers. Their cheese-filled crust has warmed the hearts and hardened the arteries of millions of Americans. Just when no one expects pizza technology could get any better, DiGiorno’s is serving up the new, and divine pie — one with communion wafer crust.

Communion wafer crust uses the Catholic host and smushes them all together into an incredibly flaky gastrointestinal treat. While sacramental wine was paired with wafers in the Christian ritual of the Lord’s Supper, communion wafer crust pizza utilizes butter, binders, and a touch of blind faith.

“Who doesn’t want to be closer to God? The holy wafer becomes the actual body of the resurrected LORD during communion. What I did was to use hundreds of wafers to make one pizza. That’s like eating hundreds of Jesuses,” he said.

Pope Francis was a communion crust atheist before having a bite. Now, he’s a true believer in Jesus and the pizza nicknamed Cheesus. Close friends of the Pope say he can’t get enough of the stuff.

Some Catholics refuse to try DiGiorno’s Communion Wafer Crust Pizza. They say it’s sacrilegious. DiGiorno executives believe the naysayers will eventually come around. After all, if Catholics can stomach pedophile priests, then they’ll be able to handle this heavenly treat.