Seth Andrews joins Chris Mallard and me on The Daily Atheist Morning Show tomorrow (4-28) at 9 am Eastern. 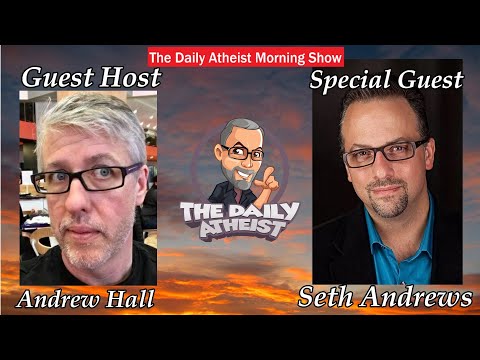 I’m being lazy and going to use the description from Chris’ video:

Seth Andrews, a video producer, and former Christian broadcaster, now hosts www.thethinkingatheist.com, one of the most popular online atheist communities in the world. The Thinking Atheist is not a person. It is an icon encouraging all to reject faith and pursue reason and evidence.

Seth has authored three books. “Deconverted: a Journey from Religion to Reason” chronicles his journey out of superstition, “Sacred Cows: A Lighthearted Look at Belief and Tradition Around the World” is a wild romp through many of the world’s strangest cultures and customs, and “Ghost Stories” is a fictional audiobook romp inspired by his annual Halloween radio show.

Seth hosts The Thinking Atheist podcast on Spreaker, a broadcast that has been downloaded 50 million times since its launch in 2010.

With a mix of humor and heart, Seth Andrews has spoken for audiences large and small in the U.S, Canada, Europe, and Australia about his former faith, the promotion of science and skepticism, the importance of Humanism in this often crazy world, and why we should all pursue a personal relationship with reality.

I hope you tune in for the live stream!

Find these designs in the Laughing in Disbelief Store!