I sat through the indifferent acting, threadbare script and shoddy production values of Atlas Shrugged Part III for one reason above all: I was eager to see how they dealt with the Eddie problem.

As you’ll remember, the book ends with Ayn Rand stranding Eddie Willers in the desert to die alone of thirst and exposure, while none of his supercapitalist friends care or even remember him. It’s a fate so callous that it even makes some of Rand’s disciples fidget uncomfortably.

I really wanted to see how the filmmakers would approach this. Would they go all in and put Eddie’s end on screen as it was written, in a final gesture of contempt for what the moviegoing public might think? Would they flinch from Rand’s cruelty and rewrite it as they rewrote so many other scenes from the book? Or would they duck the problem and leave it out entirely?

We’ll get to that, but first let’s look at some scenes from the denouement. John Galt’s capture happens the same way as in the book, although instead of a decaying hovel in a slum, he lives in what looks like a very nice, well-furnished and tastefully decorated New York apartment. How much money does Taggart Transcontinental pay its day laborers? Or – horror of horrors! – is John Galt taking advantage of that evil communist policy, rent control?

As in the book, Dagny insists she wasn’t followed, only to have that disproven when a bunch of thugs with crewcuts show up at the door. Hilariously, the first thing the government goons do is ask John Galt for ID. I have to assume the filmmakers consulted with a real police officer about what would be done in that situation and then took the advice way too literally. If he hadn’t had a driver’s license or any other documents, would they have let him go?

The one part that’s not too bad is when the bad guys smash down the door to John Galt’s laboratory and trigger the booby trap that disintegrates the magic motor and all the other advanced technology that’s in there. This seems to be the one genuine special effect in the entire movie, so I’m guessing they blew a considerable portion of their budget on it. In keeping with the tradition that trailers contain all the moments worth watching, you can see it in the official trailer, below (around 1:50 if you want to skip to it): 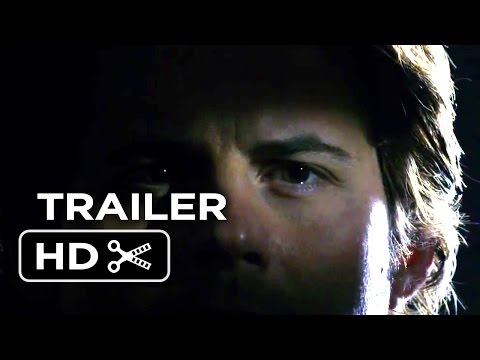 There’s a brief scene where John Galt is whisked before Mr. Thompson, who offers him all the kingdoms of the world, and it’s here that the movie really suffers from its compression. In the book, he’s held in a lavish hotel suite for days while his captors ply him with food, riches, power, and every other inducement they can think of. It makes sense that when he spurns their every offer and then humiliates them on live TV, they’d be desperate and at their wits’ end. In the movie, after a two-minute conversation, Thompson concludes that he’ll never give in and orders him to be tortured.

But the movie does do something that makes (slightly) more sense than the book: while he’s being interrogated, John Galt calls Dagny on a phone he slips into his pocket so she can overhear everything that transpires. This is more plausible than having her conveniently present to listen at the door while the bad guys discuss their sinister plans, even if it’s a jarring anachronism to see smartphones in Ayn Rand’s retro-future industrial-era setting.

Once they know his whereabouts, the other protagonists set out to rescue him. Between Dagny’s soft-voiced, scolding-kindergarten-teacher demeanor and Francisco having aged about twenty years, they don’t exactly make for an elite strike force. Luckily, thanks to budget cuts, there seems to be just one guard on duty at the entire State Science Institute. Dagny heroically murders him the same way she does in the book: 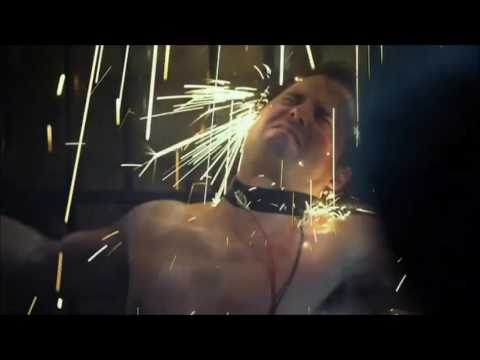 As I mentioned before, Robert Stadler’s sci-fi doomsday device is omitted from the movie. Instead, his “invention” is the machine used to torture John Galt, his former student. That would be a clever use of dramatic irony on the filmmakers’ part, except that the torture machine seems to be a car battery, two wires and a dog collar. What part of that required great scientific genius, I’m not sure.

The part where the torture machine breaks and John Galt tells them how to fix it is one of the few instances of genuine badassery in the book. Yet, as with the train crash in Part II, the filmmakers completely whiff the intended point. In the book, when Galt tells them how to fix the machine, he’s mocking them by proving he’s cool and collected under torture. It’s like he’s saying, “Try your worst, I can do this all day.”

But in the movie version, he seems to be suffering a lot more and not bearing it nearly as well. He’s wracked with pain and clinging to consciousness. When the torture machine breaks, he gasps out his advice on how to fix it through clenched teeth – which makes you wonder why he’s helping them, if it’s taking such a toll on him. And when the good guys find him, the movie implies that he was close to death and that Dagny’s love revives him (?!). Ayn Rand would have been apoplectic: 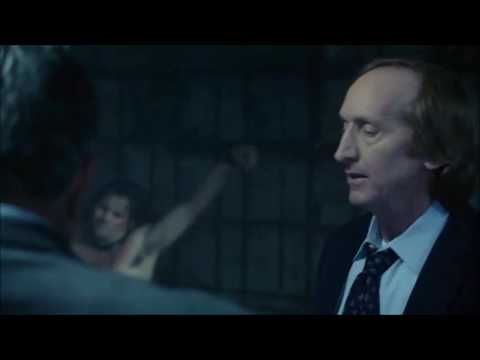 What was up with that weird slow-motion dialogue? We also don’t get Jim Taggart’s mental breakdown, which, to be fair, would have been impossible to depict on screen in a way that would have made any sense.

And now, at last, we come to the question of Eddie. By this point, I was sure the filmmakers weren’t going to kill him off the same way as the book, because the scene where Dagny sends him on his final, fatal mission was never filmed. But what did they plan to do? Would they write a different death for him, perhaps a noble sacrifice rather than the book’s spitefully pointless version? Would they neglect his fate entirely, forgetting about him the same way Ayn Rand’s protagonists did?

Nope. As it turns out, the filmmakers saw the cruelty of the book… and flinched from it. As they’re bundling John Galt into the helicopter that will fly them to safety, we get this line of dialogue: “We’ve got one more man to pick up: Eddie!”

Whether they thought of it in these terms or not, this is a slap in Ayn Rand’s face. It’s tacitly saying that her killing him off was sadistic and unnecessary (which, well, it was). Even in a movie that ends, as the book does, with the lights of New York going out and tens of millions of people dying offscreen, Eddie’s pointless death was one step too far for the filmmakers. This makes all of Part III a giant fix fic, like any other fan story whose creators took it upon themselves to “correct” the author’s vision.

In a final scene, the helicopter carrying the good guys circles around the Statue of Liberty (subtlety!) before taking off for the Gulch, where all the heroes will live forever and ever in their low-budget capitalist paradise. In Colorado. Beneath the redwood trees. You know.

The movie fades to its final, merciful conclusion with this title card:

No, I think you had it right the first time. This is definitely the end.

Next week: Closing thoughts on Ayn Rand and Objectivism as a whole.