I wasn’t anticipating I’d ever write a post with a title like this, but here we are. Welcome to America in 2017.

This past weekend, neo-Nazi Richard Spencer was giving an on-camera interview in Washington, D.C. when this happened:

Richard Spencer got punched in the face during the protests at Trump’s #inauguration pic.twitter.com/oQAwtbtEeT

If you don’t know who Richard Spencer is, here are the highlights: He founded an online magazine called Alternative Right that ran racist, misogynist and anti-Semitic essays with titles like “Is Black Genocide Right?” He’s called for the creation of an all-white country and the “peaceful ethnic cleansing” of people of color from the United States – an oxymoron if there ever was one, since that would necessarily mean the violent dispossession and forced relocation of tens of millions. He and his fellow travelers have terrorized the tiny town of Whitefish, Montana with death threats and promises to organize a parade of gun-toting white supremacists. After the election, he was videotaped yelling “Heil Trump!” while a room of his followers gave the Nazi salute.

Suffice to say, Spencer isn’t the “generic German-accented bad guy” kind of Nazi, he’s an actual Hitler-loving, race-purity-fetishizing, genocide-advocating kind of Nazi. This is the kind of person who enthusiastically supported Donald Trump and was heartened by his victory.

As a rule, I don’t endorse violence as a means of political change. I’ve always believed that the way to defeat bad ideas is by overcoming them with better ideas. I’ve always believed that strict nonviolence, except where self-defense demands it, is what gives us the moral high ground against the most loathsome characters. I also believe that using violence as a routine tool of activism would encourage our opponents to retaliate in kind, turning democracy into a brawl between competing mobs.

But for all that, I find it difficult to muster much condemnation for the anonymous activist who punched Spencer. I’d be lying if I said I hadn’t watched that video with a tinge of vicarious satisfaction.

It might be a moral remembered from my upbringing. I grew up on movies, TV and comic books where the Nazis were pure evil, full stop. If there’s one thing that Indiana Jones and Captain America taught me, it’s that the correct way to answer a Nazi is with a solid right hook to the jaw: 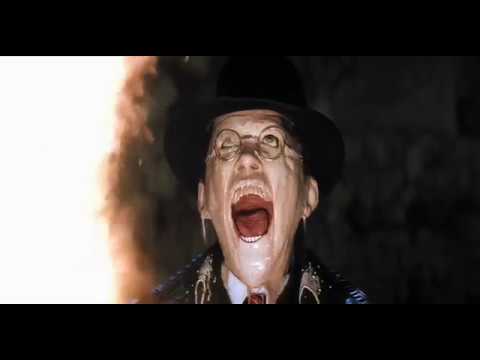 Obviously, real-life problems can’t be solved so simply. However, I’m not convinced that these comic-book superheroes make a philosophical argument that can be dismissed out of hand.

As strongly as I advocate nonviolence, I also believe that we owe it to others to respect their humanity only as far as they offer us the same respect in turn. And Nazism is the archetype of an ideology that denies the humanity of others. Their entire belief system is centered around identifying certain groups as subhuman based on their ethnicity, and targeting them for repression, violence and genocidal extermination. What’s more, we know this is no idle talk, because they once put these plans into action and killed millions. It’s a fair inference that anyone who identifies with Nazism today, knowing this history and not being dissuaded by it, would do likewise if they could.

When a neo-Nazi says he wants to turn the U.S. into a white ethnostate and promises ethnic cleansing of all minorities, how are we to understand this statement? Surely, the correct interpretation is that it’s a threat: “You don’t belong here, you shouldn’t have the same rights as me, and I’ll destroy your life if I can.” Even if the Nazis could gain political power and carry out this program under color of law, it wouldn’t be any less of a threat. Violence that tramples human rights is no less objectionable whether it’s carried out by an individual or by a state.

As someone who’d be counted as Jewish under any criteria a Nazi might dream up, you can imagine that I have a personal perspective on this. If there’s any such thing as “fighting words” – speech so offensive or insulting that it could reasonably be expected to provoke an average person to violence – then this is it. How else would you expect someone to respond to such a blatant threat against them, their family and their community?

If a punch is immoral because it’s an act of violence, then the violent genocide that modern Nazis advocate must logically be a far greater evil, and deserving of far harsher condemnation. It’s important to keep that proportionality in mind before any pious finger-wagging. Personally, I doubt I’d punch anyone in the face, Nazi or not – but I’m also not going to be overly hasty to condemn anyone who hates racism enough to find that degree of provocation too much to resist.