Ayn Rand doesn’t have a good history at the box office.

The three Atlas Shrugged movies were a fusillade of bombs, each one flopping worse than the one before. You could attribute their failure to the low budget, to the haste and inexperience of the filmmakers, or if you’re feeling philosophically unkind, to them being unworthy heirs who didn’t understand Rand’s true message.

But The Fountainhead was made by Hollywood professionals according to its creator’s vision. From her days as a screenwriter, Rand saw how drastically a script could be altered by rewrites, directors’ changes or actors’ ad-libs. To make sure this didn’t happen to her, she demanded, and got, an unprecedented amount of control over the screenplay:

About two weeks before The Fountainhead went before the cameras, she arranged that she would be at the studio during the duration of production, without payment, to provide any necessary rewrites, in exchange for which the studio guaranteed that all changes or additions to the screenplay would be worded by her. By mid-production, Jack Warner decreed that no one at Warner Bros. was permitted to alter or remove her words from the screenplay. This was not standard operating procedure in Hollywood.

In spite of all these precautions, The Fountainhead was a critical and commercial failure. This week, we’ll talk about why this happened and how Ayn Rand responded.

As we’ve already seen, Rand had to grapple with Hollywood censors who wouldn’t permit the rape, adultery and divorce of the book to be depicted on screen. In the end, she agreed to make changes to appease them. Most of these elements ended up being cut out or only hinted at.

But there was a problem looming with the climax, where Roark blows up Cortlandt Homes, gives a speech at his trial about why he had the right to do it, and is acquitted in an act of jury nullification. This couldn’t be omitted for the story to make any sense. However, the Hays Code specified that “The presentation of crimes against the law is often necessary… But the presentation must not throw sympathy with the crime as against the law nor with the criminal as against those who punish him.”

To get around this, Rand prepared a line of dialogue where the judge instructed the jury that they could rightfully acquit Roark if they found he didn’t have any criminal intent:

“The defendant has stated that he regarded this case as a moral issue and that he was motivated by the integrity of his moral convictions. You may or may not agree with him. But you are constrained under the constitution of our country to recognize his right to hold his own convictions according to his own conscience. If his convictions are sincere, then criminal intent is lacking in this case.” (source)

This is absurd as written. No judge would ever tell a jury that a criminal defendant has the right to break the law if he sincerely believes his own convictions override it.

This line didn’t make it into the film anyway, but the final cut does have the judge say, “The liability of the defendant for any financial loss is a question to be determined in a civil suit.” This is actually an improvement over the book, which ignores the obvious issue of Roark’s civil liability.

Combined with a line of dialogue about Roger Enright buying the land and turning it over to Roark, this seems to have been enough to satisfy the censors that justice had been done and that the film wasn’t attacking the American legal system as illegitimate (which is ironic, because the book clearly does).

But let’s get back to that speech. As written in the book, it should have taken at least a half-hour to deliver. Rand condensed it to about six minutes, but even with this concession, the filmmakers considered it too long. You can watch it and judge for yourself, but I think the filmmakers were right. It drags on and on, especially noticeable when the camera repeatedly cuts back to the spectators in the courtroom but doesn’t even show them reacting in any way: 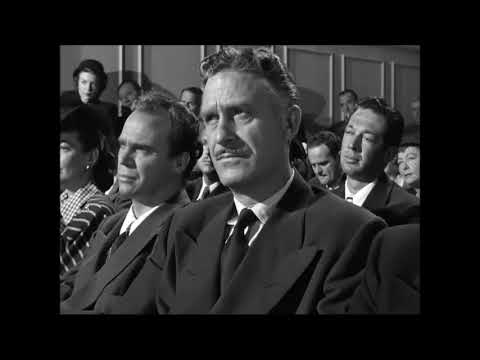 When the director wanted to trim the speech down, Rand hit the roof, threatening to sabotage her own film:

Arriving on the set one day, Rand was shocked to learn that Vidor had shortened her hero’s speech, the very thing that in her view gave meaning to both the book and the film. The studio had considered it dramatically overlong and rambling and Cooper had had a hard time understanding it… When the writer threatned to take her name off the film and publish ads telling her millions of readers not to see it, Jack Warner finally allowed the speech to be shot as written. With a running time of six and a half minutes, Roark’s speech was the longest in film history at that point. (source)

Despite the battles she fought with the studio, Rand pronounced herself satisfied with the final version of the film. She said “Warner Brothers have given a great demonstration of courage and consistency” and called it “the most faithful adaptation of a novel ever to appear on the screen” – that is, until the premier.

On release, The Fountainhead was savaged by critics and bombed at the box office. It grossed $2.1 million, which was $400,000 less than its budget. The lead actors’ performances were panned as wooden and didactic:

Critics called it scrambled, pretentious and embarrassing, “a story fit for the tabloids and the trash basket.” Neal, who was escorted to the premiere by Kirk Douglas, felt humiliated when no one said a word to her about her performance. Finally, Virginia Mayo approached her and exclaimed, “My, weren’t you bad!”

…Cooper’s performance was considered to be wooden and pathetic and when he saw the film as a whole, he agreed with the critics, feeling that he had not delivered the final speech as he should have. He would often say in interviews about The Fountainhead: “Boy, did I louse that one up!” (source)

Remember that according to Rand, the free market can never be wrong. Even with her hand firmly on the tiller, the movie-going public rejected The Fountainhead. She should have accepted this as proof that her philosophy was flawed.

Instead, she rewrote her memories to convince herself that she had disliked the production all along. She complained later in life that the lead roles had been badly cast, that the director had misunderstood her vision, that the architecture shown on screen wasn’t as good as it should have been – anything to avoid the truth that what really hampered the movie was her.

Rand’s retrospective complaints about the casting are an excuse to avoid facing up to the truth: it’s impossible for any flesh-and-blood human being to play an Ayn Rand character the way they’re meant to be played, because her characters don’t act like human beings. They don’t have emotions like human beings, they don’t have weaknesses or flaws or doubts. In a book, the narrator can tell the audience what they’re supposed to be feeling, but film doesn’t have that luxury. It’s no coincidence that people acting out Rand’s philosophy come off as rigid and inhuman.

The same goes for Roark’s big speech. It’s the same problem that afflicted the Atlas movies: talking is not a free action. It’s unnatural for one person to monologue at length while everyone else sits frozen in silence. A trial is meant to be an adversarial procedure. When one side gets to filibuster without complaint or objection, it’s too obvious that the author is stacking the deck in their own favor.

It’s striking that The Fountainhead and the Atlas Shrugged movies, made decades apart by different filmmakers, suffered from the same problems and bombed in the same way. This is evidence that these problems have nothing to do with the specific adaptations, but are inherent to Ayn Rand’s philosophy: her clunky lectures, her inhuman characters, her black-and-white politics, her fiercely dogmatic attitude that anyone who disagrees with her in any particular is an enemy who deserves only destruction.

The novels can cover these problems up with selective attention to detail, but on the screen, the flaws shine through all too clearly. There’s often the germ of a good story in Rand’s books, but ironically, it’s filmmakers trying to be too faithful to her that proves to be the kiss of death. It’s no coincidence that, the more accurately Ayn Rand’s ideas are presented, the worse they come off.

This is my final post on The Fountainhead. Thanks to everyone who’s read, commented and followed along with this review!

Next week, I’m kicking off a new project on Daylight Atheism. I’m writing a book, titled Commonwealth: A Novel of Utopia. It’s a more in-depth response, in fictional form, to the ideas I’ve been reviewing in this space for the last few years. It asks the question: what would happen if the world were taken over by radical Ayn Rand-type libertarians? How would ordinary people live, and how would they resist?

These reviews have sought to highlight the flaws in Objectivist philosophy, but Commonwealth will put forth an alternative – a better vision of how human beings can live and how society could be organized. If you’ve appreciated my reviews of Ayn Rand, you’ll want to see this!

But before I begin publishing excerpts from the book, I want to talk about the ideas and the real-life events that inspired it. In a world choked with poverty and inequality, with fascism in the ascendant and catastrophic climate change looming ahead, how do we stave off despair? Is there hope for the future? And if there is, where can we find it? Beginning next week – stay tuned!