Skip to content
Reading Time: 5 minutes
I READ a piece by Fintan O’Toole about the US Attorney General William Barr, above, in the New York Review of Books this morning that got me thinking about the love of authoritarianism that brightens the lives of so many men.
Barr is a Catholic of the authoritarian type, but I suspect he’s even more of an authoritarian than he is a Catholic, rather than the other way around. There’s a lot wrong with religion, but it may be this cloaking of patriarchal dominance that’s the worst.
O’Toole writes:

There is, however, a very strong connection between Donald Barr’s hard-line Catholicism and [his son] William Barr’s present position as the main (perhaps the sole) intellectual buttress of Trump’s presidency. That connection lies in the idea of authority.
Authoritarian rule is a defining feature of hierarchical institutional Catholicism. The magisterium of the church flows from the pope, who, on matters of faith and morals, may create doctrines that are infallible and therefore unquestionable. These include the bans on contraception, divorce, abortion, homosexual sex, and same-sex marriage.

Ludicrous, isn’t it. Who is the pope? Just another guy, another priest, elected by priests to be the top priest. It’s not “God” who does the electing, it’s just these fellas. At what step, do you suppose, does the magic happen that makes this guy chosen by other guys “infallible”? At which point does the god step in and sprinkle the magic dust or plunk the magic twanger that turns a regular human guy into The Infallible Pope? 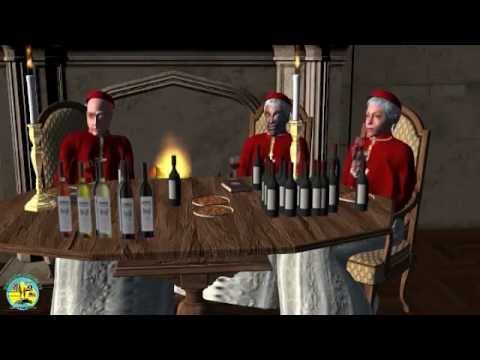 (There’s a certain similarity to the magic of royalty here. There are religious utterances and enrobings and gestures during the coronation ceremony that, we are given to understand, change a regular person into that magical thing, a Monarch. We don’t know exactly how they work, but we know they require the participation of the Archbishop of Canterbury, so there you go.)
So anyway the magic happens, in a manner that passeth human understanding, and after that the pope becomes [cue trumpets] INFALLIBLE. Nice work if you can get it. Thanks to the magic, this former just-another-guy gets to tell an estimated 1.2 billion people that women have no rights over their own bodies. It seems that Barr likes that kind of magic, and that kind of power to deprive people of rights.

William Barr is very much part of that nexus of American conservatives who date what he calls ‘the steady erosion of our traditional Judeo-Christian moral system’ to the loss of discipline in the 1960s under the pressure of all the challenges to authority that culminated so dramatically (and, for them, so traumatically) in Nixon’s departure.

It’s funny or tragic or both if Barr really thinks he’s propping up any kind of moral system by regretting Nixon’s departure and doing everything he can to make sure Donald Trump doesn’t depart. What is the use of a form of authority that places a corrupt, stupid, cruel, self-dealing, destructive real estate hustler at the top of the power pyramid? What good does it do?
It puts the pope in charge, that’s what good it does. Never mind Donald Trump, he’s merely the instrument by which this blessed death-grip of the Catholic Church will be imposed and maintained.

As a devout Catholic with links to the powerful Opus Dei movement, which galvanized the successful reaction against the liberalizing currents within the church, Barr holds to these principles as both articles of religious faith and bulwarks of the social order. In this, he is a central figure in the ever-growing influence of right-wing Catholicism under Trump, demonstrated yet again in his nomination of [Amy Coney] Barrett to the Supreme Court.

Barr’s understanding of executive authority is no more a matter of constitutional reasoning than a zealous Catholic’s acceptance of papal infallibility is a result of cool biblical analysis. It is a matter of faith.

And faith is…faith. It’s not about reasons, it’s not about explanation, it’s not about choosing between good and bad. It’s just faith. Just believe; just trust me; just obey.
What matters is what the president believes. If he has faith in his own authority, the job of his lawyers is not to question that faith but to defend it.
This is what makes Barr the perfect enabler of authoritarianism. The law, in his eyes, does not constrain the president’s will but rather serves it.
All is arbitrary. There is power, and there is obedience; that’s all there is to it.
Barr’s core belief, shared by Vice President Mike Pence and by the wider evangelical brand of religious authoritarianism, is that the entire American polity is possible only if its citizens are not just religious believers but believers in an absolutist “transcendent moral order which flows from God’s eternal law.”
And how do these believers know there is such a transcendent moral order? And that it flows from something called “God’s eternal law”? And that the priests and cardinals and popes who tell them so have it right and are not lying? And that none of the priests and cardinals and popes who preceded the current ones got it wrong or lied about it? How do they know their transcendent moral order is better than other transcendent moral orders?
Because Bill Barr says so, I guess.
Editor’s note: The issue of papal infallibility is dealt with at some length here. It makes for fascinating reading. This extract seized my attention:

The Knights of Columbus, the largest organization of Catholic laity in the world, was founded soon after the dogma of infallibility was adopted (1882) by a priest in New Haven, Connecticut. The mission: protect the faith. By 1914, the Knights had evolved into a national organization with considerable capability to intimidate those who spoke out against the Church regardless of whether the criticisms were justified.

They created the Commission on Religious Prejudices, chaired by Patrick Henry Callahan, to shut down the press criticism of the Church. According to their 1915 report, the Commission sponsored an education campaign by “informing and correcting editors and journalists who allowed religious prejudices to surface in their newspapers.” Callahan pointed out that between August 1914 and January 1917, the number of publications which published material critical of the Church dropped nationwide from 60 to two or three.

William Barr, according to the National Catholic Reporter, is a prominent member of the Knights of Columbus:

As part of his Senate confirmation hearing to become Trump’s Attorney General, Barr listed associations with several organizations that play a key role in advancing issues central to the conservative Christian movement, including the Knights of Columbus. A member since 1984, he has provided legal counsel to the Knights on tax exemptions. For three years in the 1990s, Barr noted on the Senate confirmation forms, he was a “Supreme Board Member” of the Knights.