WE’VE seen this story before, all too many times.

A mass grave containing the remains of 215 children has been found in Canada at a former residential school set up to assimilate indigenous people.

The children were students at the Kamloops Indian Residential School in British Columbia that closed in 1978.

What does that mean, “to assimilate indigenous people”? It means, of course, to make them less like themselves and more like Us, only weaker and more subservient. It means to alter them to make them fit into a pattern that we’re used to, because we are the Top people so we get to say what pattern everyone else has to fit into.

It means we do things the right way, and everyone else does them the wrong way. It means using the technological edge we have as a lever to force ourselves on people who were here first (aka indigenous) and then killing off most of the adults and shaping the children to be compliant, conforming servants. 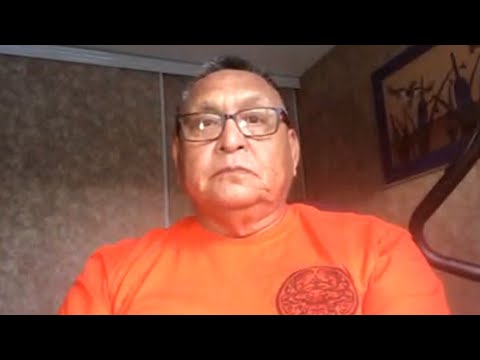 The discovery was announced on Thursday by the chief of the Tk’emlups te Secwepemc First Nation.

Prime Minister Justin Trudeau said it was a “painful reminder” of a “shameful chapter of our country’s history”.

The First Nation is working with museum specialists and the coroner’s office to establish the causes and timings of the deaths, which are not currently known.

Naturally not, since the 215 children who died at the “school” were in a mass grave. Children dumped into a mass grave obviously aren’t worth keeping records for, or getting medical treatment for, or notifying the families of, or given a loving or respectful farewell.

Canada’s residential schools were compulsory boarding schools run by the government and religious authorities during the 19th and 20th Centuries with the aim of forcibly assimilating indigenous youth.

Kamloops Indian Residential School was the largest in the residential system. Opened under Roman Catholic administration in 1890, the school had as many as 500 students when enrolment peaked in the 1950s.

Ahhh yes under Roman Catholic administration – we’ve heard that before. We’ve heard about the Irish industrial schools, that locked up and tormented generations of children for being naughty or poor or born to unmarried parents. The Irish state simply put the church in charge of the whole appalling project, with predictable results.

The schools even made money off their prisoners, by putting them to work and keeping the profits. If you want to give yourself nightmares you can read the Commission to Inquire into Child Abuse, aka The Ryan Report, or just the Executive Summary:

Chapter 7 deals with Goldenbridge Industrial School which was located in Inchicore in Dublin and was certified for 150 girls. Boys under eight were admitted in the late 1960s. Goldenbridge was a controversial institution and had been the subject of television and media discussion from 1995 onwards when the ‘Dear Daughter’ programme had been broadcast on RTE. Allegations of a severe, cruel regime were made where discipline was unrelenting and severe…

A high level of physical abuse was perpetrated by Religious and lay staff in Goldenbridge. The method of inflicting punishments and the implements used were cruel and excessive and physical punishment was an immediate response to even minor infractions. Children were in constant fear of beatings and in many cases were beaten for no apparent reason.

A feature of this school was a rosary bead industry that was operated from the school. This industry was conducted in a way that imposed impossible standards on children and caused great suffering to many of them. It was a school that was characterised by a regime of extreme drudgery, both in terms of the rosary bead making and the daily workload of the children.

Goldenbridge was an emotionally abusive institution. Girls were humiliated and belittled on a regular basis and treated with contempt by some staff members. It was characterised by an absence of kindness or sympathy for the children.

So much for a loving God, so much for any pretensions to moral decency or conscience or really any good qualities at all. Might as well be an arm of the Mafia.

The BBC continues the Kamloops story:

From about 1863 to 1998, more than 150,000 indigenous children were taken from their families and placed in these schools.

The children were often not allowed to speak their language or to practise their culture, and many were mistreated and abused.

A commission launched in 2008 to document the impacts of this system found that large numbers of indigenous children never returned to their home communities.

The landmark Truth and Reconciliation report, released in 2015, said the policy amounted to “cultural genocide”.

Kent Mockman, a Cree painter, has been creating powerful images of the harsh truth about the “assimilation” at the residential schools, grouped under the title “Shame and Prejudice: A Story of Resilience.” 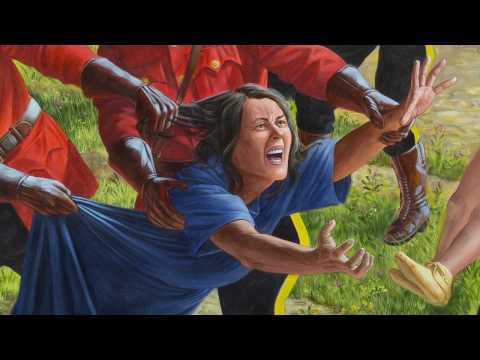 Years in the making by one of Canada’s most exciting contemporary painters, it was originally conceived to mark Canada’s 150th anniversary through an Indigenous point of view. But it’s taking on unexpected new resonance during this year’s upheaval and the global focus on systemic racism.

“This was an opportunity to ask Canadians to think about what 150 years have meant to Indigenous people, and reframe it through my own lens,” the artist says, speaking to the Straight from his studio in Prince Edward County, on Ontario’s picturesque Bay of Quinte, where the largely Toronto-based Monkman has been holed up for most of the quarantine. “Colonial history really intended to remove Indigenous people from view, but also strip us of our culture and our languages.”

Now he’ll have to do a painting of a mass grave.

Editor’s note: After receiving Ophelia’s piece, I checked 20 top Catholic websites to see what coverage, if any, has been given to this atrocity. It didn’t merit a mention in any.