THING are exciting right now in Seattle, where I live. By ‘exciting’ I mean life-threatening and horrible. 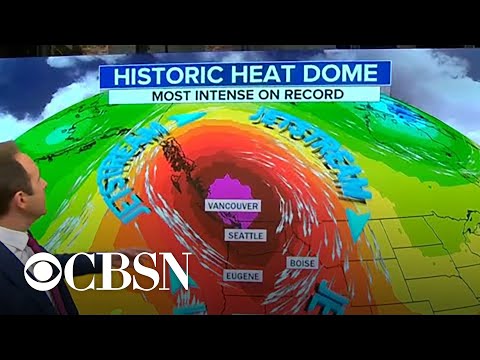 The most severe heat wave that the Pacific Northwest has ever endured is underway. Predicted to be “historic, dangerous, prolonged and unprecedented,” according to the National Weather Service, it’s already rewriting the record books.

The strength of the heat dome, or sprawling zone of high pressure centered near the U.S.-Canada border, promoting these temperatures is simply off the charts. Its intensity is so statistically rare that it might be expected only once every several thousand years on average. But man-made climate change has made exceptional events like this many times more probable.

And sure enough, now this exceptional event has happened. Maybe climate change is entirely innocent, but I have my suspicions.

To distract myself from the sensation of being slowly fried like an omelette I’ve been reading about the sixth mass extinction, which by an odd coincidence is also a product of heedless human destructiveness.

The sixth mass extinction of wildlife on Earth is accelerating, according to an analysis by scientists who warn it may be a tipping point for the collapse of civilisation.

Interesting. Climate change (also known as global warming) is accelerating and so is mass extinction; it’s almost as if there’s a pattern here.

More than 500 species of land animals were found to be on the brink of extinction and likely to be lost within 20 years. In comparison, the same number were lost over the whole of the last century. Without the human destruction of nature, even this rate of loss would have taken thousands of years, the scientists said.

We’ve caused the planet to start heating up like a pot of soup on the stove, and we’ve casually wiped out habitats and species in the process. It’s hard not to conclude that we as a species are a good deal too careless.

There’s what just happened in that little town north of Miami, Florida the other day: a 12 floor apartment block collapsed and smashed to the ground like a miniature World Trade Center in the middle of the night. Nobody flew a plane into the building, nobody parked a van packed with explosives next to it … all that happened is that the people who needed to pay attention to and act on an engineering report didn’t do so.

A structural engineering report provided to the Champlain Towers condominium association in 2018 found widespread problems that required extensive repairs “in the near future.”

The consulting group that wrote the report noted Saturday that the document “detailed significant cracks and breaks in the concrete, which required repairs to ensure the safety of the residents and the public.”

In 2018. So what was the thinking here? That “in the near future” meant in the next ten or fifty years or so? That the building would repair itself? That the whole thing was too much trouble?

Surfside Mayor Charles Burkett told NPR’s Weekend Edition that the engineering report was likely not read at the time.

“I’m under the impression that it is something that nobody had seen until yesterday when we started looking back into the records to try to understand if there was anything in the record that would indicate why this building fell down,” he said.

Oh well, that’s okay. It’s capitalism. People build apartment towers to make money, not to be pestered to make repairs years after the project was finished.

Anyway what’s the point in fretting about individual apartment towers that could collapse at any moment when the whole Florida coast is going to be overwhelmed by rising seas?

The peninsula has outsized exposure: nearly 2 million people live in coastal cities. On the list of the 20 urban areas in America that will suffer the most from rising seas, Florida has five: St Petersburg, Tampa, Miami, Miami Beach and Panama City.

Champlain Towers was just getting a head start on the process of abandoning the Florida coast before it disappears under the waves. It’s a pity someone couldn’t have warned the people living there though.

Humans are so clever in some ways. We came up with poetry, music, airplanes, the Mars Rover – but at the same time we’re too stupid to stop sawing off the branch we’re sitting on.

So we’ll keep on drilling for oil and flying around the world for business meetings and building houses in flood plains and wildfire zones until the last condo disappears under the waves.