HERE we go again, watching New Orleans get hammered by a catastrophic hurricane. There will be headlines tomorrow and for days to come about how many people drowned in their houses, because a storm surge and a city that’s mostly below sea level are not a safe combination.

Officials told the people of New Orleans to “shelter in place” because emergency services can’t operate while the storm is in progress, but sheltering in place in this case means sheltering under water.

Last time this happened, in 2005, city officials failed dismally to organize evacuation for people who couldn’t do it themselves, like for instance the ones who didn’t own cars. It seems to be an assumption in the US that everyone over the age of six owns at least one car, but cars are expensive things and wages in the US are notoriously abysmal. Salaries can be enormous, but wages are so tiny you can barely see them. New Orleans, for all its glamour, is also a very poor city, in the sense of having a lot of poor people.

More than a quarter of New Orleans residents are living in poverty and more still are living in “asset poverty,” lacking the means to support a household at the federal poverty level for three months should they lose their main source of income, a new report from the Corporation for Enterprise Development and the Greater New Orleans Community Data Center finds.

Commissioned by the Greater New Orleans and Ford foundations, the Assets and Opportunities Profile found that the poverty rate in the Crescent City is 27 percent, compared to a national average of 15 percent, and that 37 percent of all New Orleans residents are afflicted by asset poverty …

The report also found that 21 percent of New Orleans residents lack health insurance; one in ten do not own a car, which, as Hurricane Katrina demonstrated, is a necessity for evacuating the city in advance of life-threatening weather conditions.

My point exactly. I can remember all too clearly the Sunday afternoon before Katrina, listening to the mayor of New Orleans on the news telling people to leave, leave, leave, get out now, but without saying a word about how people without cars were supposed to do that. They weren’t, and nobody arranged any buses, so the next morning many of them drowned.

This time news reports are saying the hurricane developed so fast there was no time to evacuate the whole city, so (if that’s true) it wasn’t negligence or cluelessness about poverty and car ownership, but the result is the same: people are trapped in a low-lying city as a category 4 hurricane bears down on them.

Is it just some sad coincidence? Of course not. It’s been reported all along that climate change was going to mean more and worse storms.

Hurricane Ida’s power as a category 4 hurricane with up to 150mph winds barreling through Louisiana as what Louisiana Governor John Bel Edwards said could be the worst storm to hit the state since the 1850’s, reflects government findings that, as devastating as 2020 was for the economy because of the covid shutdown, Mother Earth continues to warm at record levels.

It’s too bad “Mother Earth” is only a figure of speech, because a real mother would have told us long ago not to get so carried away with our cars and airplanes and cruise ships that we would end up wrecking the place.

Global warming is causing these more severe storms and more extreme weather events in the U.S. and globally, including the devastating floods in Germany recently. Kevin Trenberth and his colleagues at the National Center for Atmospheric Research  studied this and found that, “Human-induced climate change continues to warm the oceans which provide the memory of past accumulated effects. The resulting environment, including higher ocean heat content and sea surface temperatures, invigorates tropical cyclones to make them more intense, bigger,and longer lasting and greatly increases their flooding rains.”

So tonight some of those flooding rains are going to submerge probably hundreds of people and there’s not a damn thing anyone can do about it. Meanwhile the Colorado River is drying up.

For years, experts in the American West have predicted that, unless the steady overuse of water was brought under control, the Colorado River would no longer be able to support all of the 40 million people who depend on it. Over the past two decades, Western states took incremental steps to save water, signed agreements to share what was left, and then, like Las Vegas, did what they could to protect themselves. But they believed the tipping point was still a long way off. 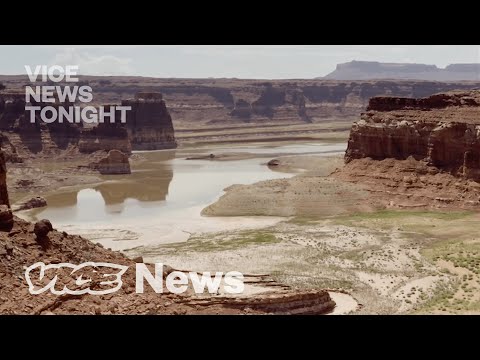 That’s such a comforting belief, isn’t it? The really bad stuff is a long way off, so … let’s go for a drive.

The formal declaration of the water crisis arrived days after the Census Bureau released numbers showing that, even as the drought worsened over recent decades, hundreds of thousands more people have moved to the regions that depend on the Colorado.

Phoenix expanded more over the past 10 years than any other large American city, while smaller urban areas across Arizona, Nevada, Utah and California each ranked among the fastest-growing places in the country.

That’s great, isn’t it? They’re hot, dry places that are already using up the existing water supply as everything gets hotter and drier, so let’s move there.

I’d like to say well now we’ve learned our lesson and we will at last get serious about climate change, but it’s all too obvious we won’t. Nobody who has the power to do it – governments, in other words – can do it because it will mean losing the next election or being ousted in a coup. We’re committing slow but accelerating suicide and we can’t for the life of us figure out how to reverse the process.

Editor’s note: After Ophelia sent me her piece, The Guardian reported that one person has died and more than one million people have been left without power, as Hurricane Ida, one of the most powerful storms ever to hit the US, has caused devastation across Louisiana.