New Zealand’s parliament voted 77 to 44 on Wednesday to pass a bill legalizing same-sex marriage, making the country the first in the Asia-Pacific region and the 13th in the world to embrace marriage equality. The law is expected to take effect in August.

New Zealand has allowed civil unions for same-sex couples since 2005, but the new marriage equality law will confer two more crucial rights: couples will be allowed to jointly adopt children, and their marriages will be recognized in other countries. 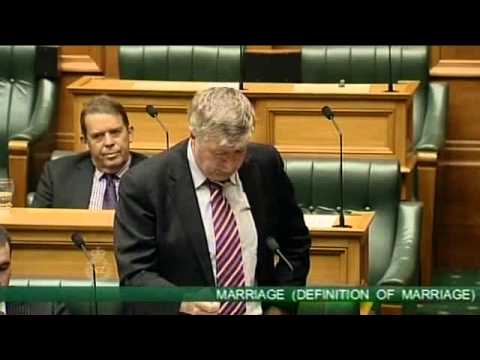 In one of several speeches that ended in a standing ovation, bill sponsor Louisa Wall told lawmakers the change was “our road toward healing”.

“In our society, the meaning of marriage is universal – it’s a declaration of love and commitment to a special person,” she said. She added that “nothing could make me more proud to be a New Zealander than passing this bill”.

The marriage movement gained momentum in New Zealand when American President Barack Obama last year announced his support for same-sex couples’ right to marry, according to the Huffington Post, even though the U.S. is far from fully embracing marriage equality:

The change was given impetus last May when U.S. President Barack Obama declared his support for gay marriage. That prompted Prime Minister Key to break his silence on the issue by saying he was “not personally opposed” to the idea. Wall then put forward the bill, which she had previously drafted.

Same-sex marriage is recognized in the Netherlands, Belgium, Spain, Canada, South Africa, Norway, Sweden, Portugal, Iceland, Argentina and Denmark. Lawmakers in Uruguay approved a law last week that President Jose Mujica is expected to sign. Nine states in the U.S. also recognize such marriages, but the federal government does not.

In addition, the success of the New Zealand bill puts pressure on legislators in nearby Australia to also push forward a marriage equality bill. The advocacy group Australian Marriage Equality expects at least one thousand Australian couples to head to New Zealand to marry as soon as the measure takes effect, even though their marriages won’t be recognized when they return home to Australia.

“It’s wonderful for them that they can marry so close to Australia, but of course all of those couples would prefer to marry in the country they love with their family and friends nearby,” [spokesman Rodney] Croome said.

Mr. Croome says the New Zealand decision will be a “game changer” when it comes to the debate on same-sex marriage in Australia.

All this talk about an international movement for marriage equality and the U.S. is STILL struggling to legalize equal marriage on a state-by-state basis. Major congratulations to all those who worked for this historic moment in New Zealand, and I truly hope the rest of the world — hint, hint, America — is taking note.