Hi! Here, we continue our examination of Frank Peretti’s somehow-bestselling fantasy novel This Present Darkness (TPD). In Chapter 5, we discover some startling facts about angels–and namely what they suck at, apparently. Today, Lord Snow Presides over an ethnography that Christian culture warriors never forgot.

(Previous LSP reviews of TPD: Marking an Era, the Stereotypes, the Persecution Fantasies, Magical Christian Jesus Powers, Magical Evil Demon Powers; Meet the Women and the Sexism; the Sad Decline of Ashton. All quoted material comes straight from sources. Page numbers come from the softcover 2003 edition of the book.)

(TVTropes Walkabout Warning for some links.)

In Chapter 4, we saw a little demon grabbing at Marshal Hogan, our ruff-n-tuff NOO YAWK TAHMNS editor transplanted to Ashton. Something interrupted this effort, however, and sent the little fella skittering away.

In Chapter 5, we learn about that interruption. A buff bro-angel named Guilo spotted the demon and drew his sword to deal with the pest–and a “trim and blond” angel named Triskal now tries to stop him and get him out of sight.

Guilo sounds like a loose cannon if ever there was one, with what sounds like really bad etiquette with his sword. Indeed, he waves it all around and gestures wildly with it. Instead of immediately barking out to him that their boss Tal ordered the angels not to fight, Triskal argues with him–extensively.

I’d expect that in potential combat situations, real-world military groups have some way of handling this exact situation. Maybe angels should try something like that. They could perhaps use commands like stand down; we have orders. I don’t know. I’ve never served. It just seems like something like that should be possible with beings who’ve been in a military organization in a state of profound readiness for literally millennia.

The two bro-angels hustle to the TRUE CHRISTIAN™ church. The pastor, Hank Busche, mows the lawn.

Before going inside the church, of course, the boys stop to admire the pastor and talk up how he prays all the time for Ashton. In fact, Triskal tells the admiring Guilo, he even “walks the streets of Ashton interceding for it.” (We’ll be talking in our next installment about what fundagelical Christian culture-warriors mean when they talk about intercessory prayer. You’ll cringe so hard that Crowley would hear it from Alpha Centauri.)

Guilo expresses his admiration, but he still doesn’t get why he–much less their boss Tal–got sent to this tiny little town. But Triskal keeps hustling him inside. There, in the church’s sanctuary (that’s Christianese for the place where the main sermons happen), they find a frat-party’s worth of angel bros.

I will never get over how downright weird Frank Peretti’s angels are. They all look like hot human men. And yes, in the Bible angels tended to look like human men, but Peretti’s gone to lengths to make clear that angels have two seemings: one is their real seeming, with wings and robes and “bronze bindings on their feet,” and another that they wear to blend in with regular humans. Here, in their private meeting, presumably they’re all in their regular angelic forms–but they all still look like an arbitrarily-diverse group of hot gym rats between reps.

And they’re all just mulling around the sanctuary. Some keep watch; others look outside the windows; others still sit in the pews, waiting.

Their captain, Tal, is present. There’s no reason at all for them to just be milling around like cattle.

He just doesn’t appear to have any idea how to get this show on the road.

Tal calls out to Guilo and the two angels chat. Guilo tries his hardest to hide his serious crush from his superior officer, but the Exposition Fairy tells us everything. These two have history. In fact, they have a lot of history.

Eventually, Guilo tells Tal that he sees a lot of the most powerful angels floating around in the church right then, but “cowering in a flimsy fortress from a dreaded enemy.” He wants to know why.

Finally, as if waiting for someone to ask that, Tal tells them all that this mission’s Big Bad is none other than “Rafar, the Prince of Babylon.”

As far as I can tell, Peretti made up all of these names. But the angels all act suitably impressed, especially Guilo, whose face reveals, Peretti tells us, “shock, disbelief, an awkward pause to see if anyone would laugh and verify that it was only a mistake.”

Yep. Millennia of hardened battle is what it takes to make angels this tough and disciplined.

After the Exposition Fairy tells us all about Rafar, particularly establishing that Tal and Guido thought they’d settled his hash many years ago, Tal lays out his big plan for dealing with the demon’s attempted takeover of the town.

It consists of doing nothing at all. Tal commands the angels not to fight or “resist.”

See, they lack “prayer cover” to do their thing. (Presumably, this need for “prayer cover” is new–none of the Exposition Fairy stories involves them using it.) Tal hopes that the demons in Ashton will simply assume the angels are there to do mana transfer–er, sorry, “watchcare”–for the few TRUE CHRISTIANS™ in town. He also wants his own presence in Ashton to be kept on the down-low. 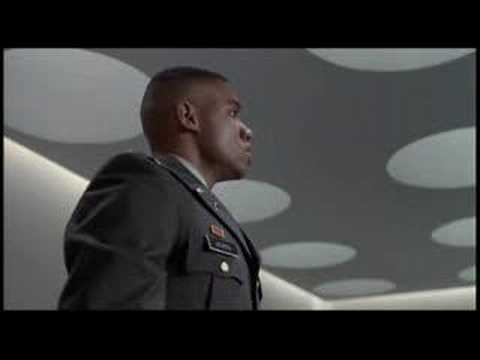 Yep, they’re all just really excited, even though they have no clue why they’re there.

That’s just very funny to me.

This next section will sound weird, but I have to show it to you or I won’t be able to sleep tonight.

At times during the meeting, Tal says things that clearly represent catchphrases for the angels. Then, the angels all take up the catchphrase and chant it back to him. It’s absolutely bizarre. Tal says these phrases like they’re just normal conversation, and then suddenly the angels all chant them back at him. Imagine what that’d be like in real life, if I just said some random phrase and everybody I was speechifyin’ at suddenly chanted it back at me!

Here are the two they use this time:

“For the saints of God and for the Lamb!” (Okay, I can kinda see this–but not how Tal first used it.)

“There is always a Remnant.” (Why? Just WHY? Why is this a chanted catchphrase?)

Hot Fuzz did the obligatory chanting of catchphrases considerably better. 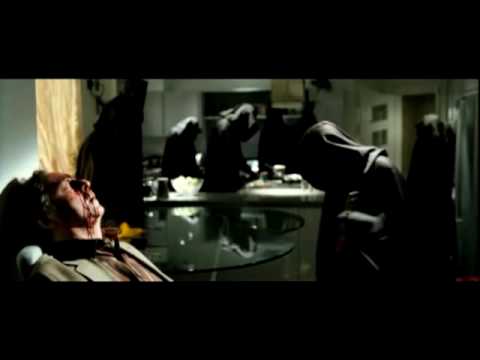 (The greater good.) Also: Spoiler alert if you haven’t seen the movie.

After assigning various angels to hang around Marshall Hogan and Hank Busche, Tal tells them just to make sure the men aren’t killed. He’s sure that they’ll both face serious tests that night.

Then he draws his sword and holds it out, and all the other angels do the same, and they chant again. Hooray Team Jesus!

Remember, they’re in a church sanctuary. Think about the tiny churches you’ve been in. Now imagine them full of big, buff, bro-angels in full kit. Now imagine all those huge guys drawing giant swords and holding them aloft while chanting.

I just asked Mr. Captain if drawing weapons, waving them around, and chanting is a normal way to end a military meeting. He just stared at me. Eventually, he stammered something about a move like that being the end of the careers of everybody involved. He just can’t even, with this book.

So yeah, FanofNeri got his wish, in a weird kinda way.

I realize that Frank Peretti wanted Hank Busche to be his wish-fulfillment character: his Gary Stu, so to speak. Hank Busche represents everything Frank Peretti–and by extension his legions of fans–want for themselves. You get the idea: men want to be Hank, while women want to marry Hank. But in reality, Hank’s a major pain in the tuckus. He has even less idea how to lead his group than Tal does.

Hank’s a brand-new pastor. He has little to no experience in pastoring. No doubt his church congregation–full as it is of operatives of the Cabal of Satanic Wiccans (or Wiccan Satanists, Whatevs) (CSWWSW)–thought he’d be a total pushover. But he’s gone the total opposite direction: he’s unnecessarily theocratic, argumentative, and authoritarian.

He’s forgotten that this church pays his bills and can fire him just as easily as they hired him. So has Peretti.

You know what Hank reminds me most of? A bully who picks on someone strong-looking on the first day of school to ensure that nobody else ever stands up to him. His first move as pastor appears to have been disfellowshipping one of the church’s oldest members for adultery–and that decision has become a huge drama as he sticks to his guns.

In that stubbornness and authoritarianism, he represents the culture-warrior ideal. And so even angels must be seen admiring him.

Ya know, out of everything that angels suck at in this book, their judgment of character might be what they suck at the most.

Today, Lord Snow Presides over how the culture wars rewrote angels to be idiots with wings.

NEXT UP: What hucksters promise church revitalization can do, what it can’t, and why. See you next time!

IMPORTANT NOTE FOR DRIVE-BY CHRISTIANS: Nobody here seriously thinks this novel represents serious theology. But we do note with concern that it is painfully easy to warp that theology into pretty much anything someone wants.