Hello and welcome back! Lately, we’ve been reviewing Frank Peretti’s 1986 crime-against-literature, This Present Darkness. In today’s installment, we see how demons take defeat–and how poorly they treat their human assistants when they get frustrated. So yes: today, Lord Snow Presides over yet another example of Christian projection: mistreating the help.

(Please click here to find the master list of previous This Present Darkness discussions! Also, any page numbers cited come from the 2003 paperback edition of the book.)

Chapter 11 opens right after the church vote that took up most of Chapter 10. In a shocking upset, the church’s members voted to keep Hank Busche, their intractable, immature, authoritarian times ten, inexperienced pastor. As Peretti describes it, the vote was very narrowly won by only two votes (with 54 total votes cast).

In response to this unexpected loss, the demons go absolutely crazy. They literally explode outward from the church and fan out over the little town of Ashton. From there, they begin to wreak havoc (p. 107):

That night the police were busy. Fights broke out in the local taverns, slogans were spray-painted on the courthouse, some cars were stolen and joy-ridden through the lawn and flowers in the park.

We’ll ignore that Christians literally do every bit of that stuff themselves. In fact, those links go to pastors who did and allegedly did that exact same stuff that Frank Peretti ascribes to grumpy demons. (Also, I hereby claim “The Grumpy Demons” as my new band name.)

Earlier, Tal (the angels’ leader) disguised himself as an old lady to escort Edith Duster to the church meeting. Now that it’s over with, Tal orders his angel soldiers to guard over her that evening. See, he’s scared that the demons might attack her in retaliation.

Obviously, TRUE CHRISTIANS™ would never do that. Nope. Never.

In two more spots in this chapter, we encounter the forces of evil abusing their assistants. In the first, demons attack Juleen Langstrat by giving her horrific visions and a migraine. Seriously. It’d be sadly funny if it weren’t for the tedious earnestness with which Peretti describes the abuse (p. 106 still):

Late into the night, Juleen Langstrat hovered in an inescapable trance, halfway between a tormented life on earth and the licking, searing flames of hell [sic]. She lay on her bed, tumbled to the floor, clawed her way up the wall to stand on her feet, staggered about the room, and fell to the floor again. . . The Masters were angry!

In the second, the demon lord Rafar realizes that his dread enemy Tal was involved with the loss of the church vote, holy cow. In response, he throws a royal snitfit! I hope Frank Peretti enjoyed writing this bit, because it comes off as supreme scenery-chewing (p. 113-114):

“Tal, he whispered. Then, like a slowly swelling volcano, he rose to his feet, the anger building until suddenly, with a roar that shook the room and terrified all those present, he exploded and hurled the sword through the basement wall, through the earth around Stewart Hall, through the air, through several other buildings on the college campus, and up into the sky where it tumbled end over end in a long arc of several miles.

Famous Hand Cannons of the 80s.

This demonic wobbler reminds me of a couple of movie scenes. First, 1984’s Johnny Dangerously: 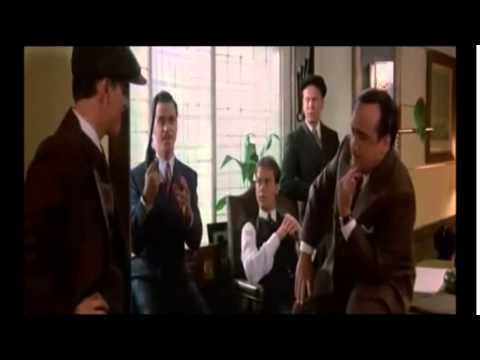 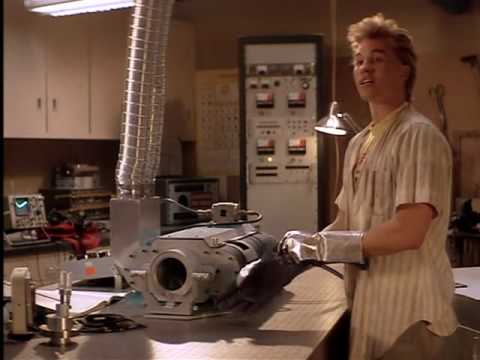 The shot of the laser-shot hole through the statue’s head at 3:37 is absolutely iconic for me. Also, the blonde woman at the beginning of the clip, Deborah Foreman, was a favorite actress of mine back then. She is a COOKIE AND A HALF. Anyway. Away from awesome 80s movies and onto fart-tastic 80s Christian books, I guess…

It’s entirely possible that Frank Peretti saw both of these popular movies before or while writing his book. Either way, Rafar throws quite a ridiculous and childish tantrum.

We’ve never ever seen TRUE CHRISTIANS™ do exactly the same thing when thwarted, have we?

Rafar also hurls the little demon Complacency into the Doom Pit. (That name comes from the Conan roleplaying game, but it works very well here.) I suppose this means nobody can be complacent anymore? But that’s probably way better of a plotbunny than Frank Peretti can manage. I’ll be keeping an eye out for strangely-complacent characters.

The Marketing of Yokes and Burdens.

Nowadays, Christians must sell themselves on their own merits rather than relying upon their ability to exert legal and social coercion on potential recruits.

A big part of their marketing consists of badmouthing the competition by making an implied contrast between the mean ole nasty enemy tribes and what they depict as their own sweet and nice and supportive tribe.

And for centuries, that’s exactly what they did. The ancient trope of forces of evil behaving really abusively got rolling very early indeed. Stories like Faust seized the imaginations of people back then, and it still does. In the trope, evildoers mistreat everybody they can. They never keep their bargains–or if they do, they alter the deal.

All these evil bosses’ underlings can do in response is “pray they don’t alter it further,” to borrow a quote from one such evildoer.

Meanwhile, those bosses treat their people like absolute crap. They hurt them, abuse them, and make sure they feel like insignificant worms before their egocentric, narcissistic masters.

So here, Frank Peretti panders once again to his tribe.

He and his tribemates present Christianity as “an easy yoke and light burden,” to borrow a quote from one of the Gospels’ anonymous writers. They tell their marks that their god never alters the deal, never tricks people into agreeing to something that’s not in their best interests, and never fails to follow through on a promise. UNLIKE SATAN. SATAN. YOU KNOW HOW HE IS, THAT ICKIE SATAN!

By the time the marks find out just how untrue the marketing claims are, hopefully they’ll be settled into indoctrination so completely that they won’t leave.

In reality, the opposite tends to be true. When we hear about really abusive bosses and ghastly, one-sided deals that take advantage of people, we discover that the people doing this terrible stuff are, well, Christians. Specifically, they tend to be evangelical culture-warriors.

The truth shines as clearly here as it does on those politicians posturing about their “famblee valyoos.”

The more fervent and fundagelical someone is, the more abusively they behave and the more hypocritical they’ll prove to be.

And man oh man, a lot of horror stories come out of the ranks of church volunteers. Tons of websites exist to advise pastors and church leaders in how to avoid abusing or alienating volunteers, and I can see why. Without volunteers, the average church would collapse in short order. There’s no way, no how that a church could pay staff to do all the stuff that needs doing, especially not nowadays in Christianity’s decline.

And weirdly, “Jesus” isn’t telling any of these Christians to treat their people better. Nor is he inspiring them to do better. Someone must tell them, just like people must tell them to tip better and not be jerks in public. And those hopeful prophets and reformers always fail utterly to bring about any change in their target audiences’ behavior.

But in Frank Peretti’s hands, it’s the demons, not the Christians, who mistreat their staff.

They all but torture Juleen Langstrat. Alf Brummel actively dreads giving them any kind of reports regarding the church meeting. In fact, he contemplates his options: resignation of his post as Chief of Police, fleeing Ashton entirely, even death by suicide.

Not to put too fine a point on it, but we had a whole rash of exactly that this past summer. Christian laypeople and pastors alike take this step all the time. Christians themselves have begun to notice this sad truth, but they still have no clue in the world why it happens–much less any idea what to do about it.

And all this horrific retaliation occurs because a tiny little church’s administrative meeting didn’t quite go the way a petulant little demon lord wanted it to go.

When I think of completely out-of-proportion responses, I think about fundagelicals.

From the notion of Hell as a perfectly appropriate eternal response to a finite lifetime of largely thought crimes and wrongthink, to the bizarre cases of child abuse masquerading as “training up a child” that sprout daily from the pages of news sites, to the beyond-ghastly retribution they delight in extracting for the smallest of thought crimes and wrongthink, fundagelicals have only one response mode to pushback and criticism: balls to the wall, pedal to the metal, and one-hundred-and-crazy-percent all-in.

Peretti combines his projection with an implied sales pitch about his tribe: See, SEE, Christians totally don’t mistreat anybody like this!

Except they absolutely do.

No Rescue. No Recourse.

Worse, even the most sorrowful of TRUE CHRISTIANS™ can do nothing about this sorry state of affairs.

They can’t predict who’ll do the abusing, can’t rein in the abuse, can’t easily remove abusers from their post, and can’t protect anybody from the abusers. All they can do is give us exaggerated lil Jesus winces after the fact–before telling us some idiotic Christianese thing like “don’t let man drive you away from Jesus,” as if they have the right to set terms.

But I know to my very marrow that if Mark Driscoll could have telepathically given people migraines for displeasing him, he’d have been doing it so often he’d have had to clear some time from his busy schedule of screaming about yoga, shaming his wife, and pestering his elders’ wives about their sexual habits.

So here, today, Lord Snow Presides over another chilling episode of Christians projecting their weaknesses onto others. This time, it’s Christians accidentally making their demons mistreat their underlings just like Christian leaders and employers themselves do to their workers and volunteers. Oops!

NEXT UP: Speaking of volunteers getting mistreated: being a people pleaser actually works to our disadvantage in churches. I’ll show you how, tomorrow. Then, we look at aww, what’s the harm of buying into the Satanic Panic. See you soon!

Also check out our recent Graceful Atheist podcast interview! It was a blast.