A long time ago, I wrote about That One Weird Thing That Happened Once (TOWTTHO). It means that stuff sometimes happens that we can’t immediately explain, and that sometimes it can feel like something really mystical or even supernatural occurred. Often, these experiences feel significant to us and even alter our lives. My little family had one of those experiences very recently, so the topic’s been on my mind. Today, let me show you why these occurrences can be so powerful–and yet so deceptive.

Years ago, I tangled with a TRUE CHRISTIAN™ online. He informed me that he was going to totally pray to Jesus to make something happen to me within “the next 30 days” that would totally change my mind about Christianity.

I read that and laughed. Ignoring the whole problem of why he felt it necessary to tell me that he was praying at all, why land on 30 days? Why not within the next 24 hours? Or at the moment my eyes scanned his words?

The reason is TOWTTHO: That One Weird Thing That Happened Once.

Within one month, something weird is bound to happen to almost everybody. He was banking on it happening to me. A tighter time limit drastically lessened the possibility of something happening, that’s all. Too long, and I’d simply forget about it.

As you might guess, TOWTTHO becomes a powerful marketing tool for religious zealots, simply because they happen so often.

Eventually, everyone rolls a crit.

This concept, like religion itself, hijacks a number of quirks of human psychology.

Our skill at creating patterns out of the things we encounter might have helped our ancestors evolve into today’s humans. We can look at clouds and see animal shapes, hear rustling and perceive voices, catch a shadow out of the corner of our eyes and think it’s a ghost, or dive into conspiracy theories like backmasking. Even the most hard-boiled skeptic can be taken aback by TOWTTHO sometimes.

Second: We can imagine things that aren’t real.

In the original TOWTTHO post, I outlined a whole series of things that would have had to have happened for a ghost to bring a defunct radio back to life. When we’re faced with a weird thing, we can skip right through all of those prerequisites because we’re so focused on imagining something else.

Third: Sometimes we can really be slaves to narrative.

When someone subscribes to a particular ideology, they’ll reach for that ideology first to explain things. As a Christian, I had a very weird thing happen to me once. At the time, I assumed that Jesus had saved us. Had I been Wiccan, I’d have attributed the event accordingly. Years later, as a None, I thought of a whole other–and way more realistic–explanation.

It’s very easy to see how ancient people could build entire religions around the interpretation of these occurrences, which they often called signs or portents.

Christians themselves frequently use or allude to signs and portents. The Bible is chock-full of them. In fact, it prescribes a number of ways to create TOWTTHO:

Then it was just up to the people encountering the event to interpret it.

When I was Christian, we often created these if-then statements for ourselves using weird events. I remember a few clearly, mostly stuff Biff had come up with like these:

Also, Endtimes conspiracy theorizing consists almost entirely of weird events that the conspiracy theorists weave into a narrative about the world ending. For that matter, almost every Rapture scare depends on TOWTTHO.

The Strange Intersections of Our Lives.

Sometimes, I find myself staggered to think about all the different unexpected turns and events people face every day. A whole series of coincidences led to me buying that Miata I had for years. And a whole other series of other coincidences led us to Bumble and Bother in the first place.

One step forward, another step sideways, one appointment scheduled a day later or earlier or missed entirely, and who knows what might have happened instead? In a way, it’s scary to contemplate those what-might-have-beens. Yes, and maybe in more than one way.

Bumble first exploded into aggression against Bother the night Mr. Captain and I packed for a trip. That happened on September 24th. On October 8th, I realized he would need to be re-homed.

And then, four days later, Jim (not his real name) wrote to me and made me think about TOWTTHO all over again.

You see, he’d had a big orange boycat himself that had passed away of cancer just a couple of years ago. It had taken him two years to get over the loss–he’s quite a dedicated cat lover. A couple of months ago, he began the search for a new pet. He wanted only one cat, and he was content to take as long as he needed to find him.

Then he spotted Bumble’s photo and bio, newly put up at pet adoption site.

Bumble’s a dead ringer for his beloved pet. The two cats could have been identical twins. And they apparently both have the same exact personality.

Bumble, of course, played shy when Jim came over. So we chatted while the cat took his time investigating. At one point Jim asked if Bumble liked sleeping on the bed. I said oh yes, he likes to keep close tabs.

And I added wistfully that I’d miss Bumble’s sleep-murmuring. Jim looked shocked. “Wait, he murmurs? Does he chirp too?” OMG YES. I’d never had a cat that did any of that, and neither had Jim, until these two.

We both sat back in our chairs, dazed by all the strange similarities and quirks of fate that had led us both here.

I could not possibly have written a more perfect new friend for Bumble. Jim’s like me, except male, bearded, and tatted for miles. Being retired, he’s got the time to devote to Bumble. And he’s well-versed in the ways of cats. Just in hopes that this was his perfect cat and because his last kitty had been a very vertical cat, he’d already taken the liberty of ordering the biggest, most elaborate cat tree Chewy offers–something like this.

(When he said he shopped at Chewy, that made my heart sing. No, I’m not affiliated. I just adore Chewy.)

When he showed me the picture of the cat tree, I almost cried. Yes, Bumble is a very vertical cat, and yes, he will absolutely love that tree.

Jim took Bumble home with him, and so far it sounds like Bumble’s still skulking around his place settling in. It’s possible that it won’t work out. Just because Bumble seems so similar to his previous cat, that doesn’t mean they’ll mesh. It’s still early to say.

Afterward Jim and Bumble left, Mr. Captain and I went out walking at a park downtown. There, we ran across a beautiful deer and watched her graze for a long time. The sight of her grazing while the rain sprinkled down soothed me considerably.

Meanwhile, Bumble took about half my house’s atmosphere with him. This place feels so quiet now.

Bother’s relaxed, playful, and seems happily-buoyant in a way I haven’t seen for a long time. What I thought was just her being neurotic was likely her being enormously stressed by Bumble’s growing rambunctiousness.

Indeed, after they were separated, Mr. Captain and I began to realize just how escalated his aggression toward her had been mounting over time. It was one of those things that builds so gradually that it’s imperceptible. But his freakout hadn’t come from nowhere. It had been coming for a long time, and it would have happened eventually–and soon.

All along, Bumble had needed to be the only cat for one perfect person. Jim needed a gregarious, ultra-involved cat to run his life for him. And thanks to very fortuitous timing, they both hopefully found each other.

The universe works in strange and mysterious ways. Sometimes, the intersections operate in our favor. That doesn’t mean gods intervene in anything or that Fate rules us all. I don’t believe angels prodded Jim to go looking on that particular website that day, nor nudged Bumble to crisis mode with Bother last month. 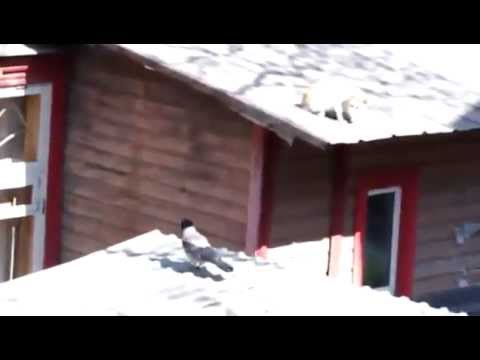 Like this, but in Bumble’s case the crow was invisible. The bird’s ploy works because cats redirect aggression. Bother woke up to watch this video, by the way.

If I were a Christian, I might well consider Bumble’s adoption a miracle. But I’m not, precisely because I’m not that closed-minded. I don’t leap immediately onto whatever explanation comes easiest to hand. Instead, I analyze the situation as Ubi Dubium has suggested. I ask if what happened was:

My conclusion: No gods or angels or demons or sprites or masters of fate involved themselves here.

This story will definitely remain one of my Top 10 TOWTTHO, and it wins its laurels entirely naturally.

I’ll keep y’all posted about how Bumble’s doing in his new digs. Cross your fingers!

NEXT UP: LSP! And then, we look at horrible Christian parenting advice from a new star in the apologetics field. See you soon!

Origin Story: The idea comes to us courtesy of Ubi Dubium, whose term for it was “that one spooky thing.” I’d forgotten exactly how it went when I first wrote my first TOWTTHO post. That’s how I couldn’t find the source post to link originally, back in 2015. She wrote her original post as part of a series, and the whole thing is excellent. Highly recommend. (Back to the post!)