Hi and welcome back! I had a topic planned for today, but it seriously got me down. By the time I’d finished the post, it felt downright weird to run it today. Instead, we’ll run it on Tuesday. Let us instead think of love and connections, of family and those we hold dearest. Whether those connections are bound to us by blood or by choice, they’re what matter most. Today, we celebrate Mother’s Day — and the real love that the day represents.

A Silly Story That Wasn’t So Silly In The End.

Way, way back when, shortly after I’d deconverted around 1994, my then-husband Biff and I moved to Japan. After that plan failed utterly, we then headed for Portland, Oregon.

Back then, it exactly resembled the 2017 Portlandia sketch. 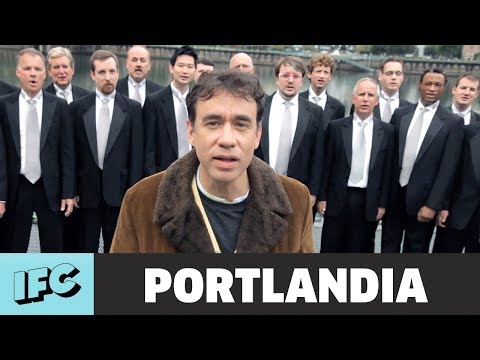 Biff, of course, immediately joined a church in our denomination (United Pentecostal Church, International) (UPCI). He kept asking me to attend services with him, but ugh, I’d done my time and wasn’t at all interested.

On Mother’s Day, which came just a month or two after we’d moved to Portland, Biff made a special plea for me to accompany him to a very special, woman-honoring service for Mother’s Day at this very church.

I should mention, as well, that at this point Biff hadn’t quite realized yet that I’d fully deconverted. I mean, I’d told him repeatedly I didn’t want to attend church anymore, but it took awhile for facts he didn’t like to sink in.

At first, I had an ace up my sleeve:

Desperately, Biff tried another tack: “You have a mother, though. It’s for all women.” The way he phrased it, the day sounded like Catholic-style Easter and Christmas Vigil all rolled into one.

We were broke as a joke; things were still precarious. So I took the request as a sweet gesture. Biff wanted to give me a present, and this was his roundabout way of arranging it.

Sitting on the Other Side of the Mirror.

That morning, I think Biff expected me to get re-bitten by the Jesus bug or something. He beamed and behaved that whole morning like he was on a first date (and scoping me out for narcissistic supply all over again).

Whatever his hopes might have been, I only felt more alienated from Christianity by the minute. Without the context of belief, everything that church did seemed absolutely bizarre and weird to me. Worse still, I could easily see how manipulative the church’s leaders were. Everything from the music to the preaching to the offering call to the altar call was designed for maximum returns.

The whole service revolved around being gracious, kind, appreciative, and thankful to the women of the congregation. They glowed with joy as they listened to an endless stream of compliments from the pulpit. A number of speakers gave short messages about motherhood that drew upon mostly Bible stories, as well as examples from their own lives of the selfless care their mothers had given them throughout their lives.

After the service, the pastor (we’ll call him “Joe;” I can’t remember his name) announced that women could collect their presents from the foyer. There, I discovered an array of potted geraniums in full bloom. They weren’t like big pots, no, but still, it made me smile to see those blossoms.

I advised the woman handing them out that I didn’t have children. She smiled, said that was fine, then cheerfully handed me the pot of flowers I said I liked. I think mine were shades of bright pink.

Flowers on the Windowsill.

When we got home from that Mother’s Day service, I put the little pot on the living-room windowsill. I tended it, but I wasn’t much of a green thumb back then. As the flowers wilted, I couldn’t afford a bigger pot — and that was it for those poor geraniums. They became another casualty of my domestic ambitions.

They hadn’t even wilted away before Biff reverted back to his old narcissistic self again: demanding, oblivious to my needs or feelings, entitled, and needlessly and casually cruel. Very quickly, I realized that giving in to him for any reason at all regarding religion only set back our progress to a hopefully better future together.

Because yes, of course Biff thought that my attendance that day meant I was open to more invitations and that life would soon be returning to the form he preferred.

For that matter, he never did understand that I didn’t want a performative show of gift-giving. I wanted respect and solidarity, mutuality and compassion. I wanted love, and even back then I sensed that whatever fundagelicalism had taught us about love, it was nowhere near the glorious and dazzling reality of love.

And you know what?

I think almost every woman in that church experienced exactly what I did, to some degree, and probably way more than I did even.

A long, long time ago I ran across a concept that perfectly explained what had happened that day:

The idea sounds a lot like social capital on a more intimate scale. It runs like this: everyone has a mental love bank that keeps track of deposits and withdrawals, just like a real bank does. A deposit or withdrawal can be large or small, occurring regularly or as just a one-time thing. Most people keep a running tally in their heads of their partners’ deposits and withdrawals to that bank. They use that tally to reciprocate with withdrawals and deposits of their own into their partners’ bank.

Withdrawals operate along similar lines as oversights, slights, requested favors, and outright offenses get worked out between the partners.

Both small and large deposits have their place in any relationship, obviously. The small, recurring deposits maintain a more steady and harmonious relationship, while big gestures can send a happy couple to the next level of joy.

The real problem happens when someone thinks that a big huge deposit can negate a lack of recurring small deposits, or that it can even balance out long-term withdrawals.

Unfortunately, that’s most of the fundagelical marriage-advice book, right there.

What My Then-Tribe Got Wrong About Mother’s Day.

When I was Pentecostal, I saw something happen over and over again that solidified my intention never to have children of my own:

Women got the short end of the stick in every single way in that culture. They got treated like second-class citizens and like barely-even-people every single day of the year — except for Mother’s Day. Their husbands behaved like immature, control-starved, despotic toddlers every other day.

But oh! That one day, the men went all out with magnificent gestures and kind words toward the women they denigrated and used and tormented all the rest of the year.

That one day was supposed to settle out these men’s constant withdrawals from their wives’ love banks: to balance the ledger, so to speak.

It didn’t, but that’s what our culture told men at the time. Their leaders promised them that if they did this, then it’d keep their wives in place and docile. When it didn’t, the women got blamed, of course, and told they weren’t Jesus-ing correctly.

All of these years of observations came home to me that morning as I sat watching the church service like a field anthropologist.

I realized I’d never be content with such a relationship. No number of pink geraniums and no amount of preachers’ accolades could outweigh the way I could expect to be treated the other 364 days of the year. I wanted way more than fundagelicalism could ever give me.

In a weird kind of way, I’m thankful I attended that service. It showed me so much.

For years, I just thought it revealed to me at last how contrived and manipulative church services were, at a time when my deconversion was still very fresh.

But now, I realize it also showed me the truth of fundagelical relationships. I didn’t even know what the love bank was at the time; I just realized that day that big huge gestures didn’t and couldn’t take the place of daily respect and kindness between two people who were truly working together.

Worse, it showed me that I didn’t have that kind of relationship with Biff.

Of course, being the stubborn lil cat that I am, I still thought things could be salvaged. But that, too, was a belief that was not based in reality, and over the next year or so I’d see a bunch of those wither away just like the flowers had.

Today, I celebrate Mother’s Day, and hope that every single person reading this post enjoyed a day of love, respect, connection and kindness — and that all of it extends to the whole year, not just to one day.

NEXT UP: LSP! Then, Tuesday, we examine a worrisome and growing trend within evangelicalism.

(NOTE: The Patheos filter doesn’t like the word “pot,” so if you use it, feel free to add a number to the end of the word. Same for “bag.” Just lettin’ y’all know!)