Hi and welcome back! Yesterday, we talked about authoritarian Christians in terms of roleplaying games. And now, I want to show you where the metaphor leads: suspension of disbelief. Authoritarians require complete participation in their Happy Pretendy Fun Time Games. Otherwise, they lose suspension of disbelief and everything goes higgledy-piggledy. Today, let me show you why authoritarian Christians push as hard as they do for complete participation — and what happens when they don’t get it.

(Some previous posts about gaming: The Lady in White; Commedia dell’Arte; Operation Pitchfork; Multi-Classing a Catholic Schoolgirl/Thief; Permadeath vs. Respawn; Crushing on the Antichrist; How Some Gamers Restored My Faith in Humanity.)

To illustrate the stark difference between good faith and bad faith gaming, I present this Key & Peele sketch: 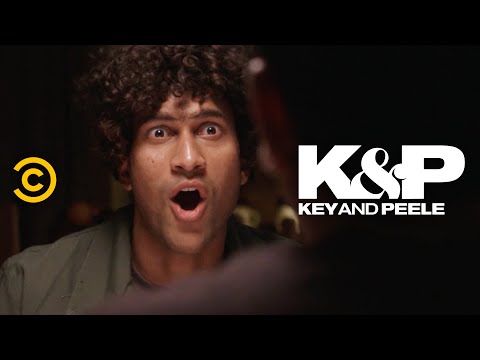 This sketch might well represent the legit nightmare of every inexperienced Dungeon Master (DM) who’s ever set up a table screen. In it, the DM’s Cousin Tyrell shows up as a guest player one night. He completely destroys this poor guy’s entire campaign in less than five minutes because he refuses to take the Happy Pretendy Fun Time Game seriously.

This fictional group’s D&D campaign seems like one that’s been running for some time. However, it — like all such campaigns — depends on the players’ good-faith participation. The moment someone joins the group who doesn’t intend to participate on that level, things unravel almost immediately. And for all the time they’ve been gaming together, this DM doesn’t seem like a very experienced one.

A decent DM could have taken Tyrell in hand, if Tyrell had been even halfway inclined toward sincerity. If not, a decent DM would have ejected him from the game or given him a temporary character to roleplay who would have been more to his liking,

If Tyrell proved to be completely insincere as well as intractable, the DM could even have just postponed the game to find something all of them could enjoy on the same level that night. Like I dunno, maybe sitting around the DM’s living room playing games like Fortnite on their phones. Or watching America’s Funniest Home Videos. There’s got to be something they can all enjoy together.

Suspension of Disbelief in Games and Stories.

The reason that good-faith gaming is important has to do with the group’s suspension of disbelief.

Most people know this term from media. Readers suspend their disbelief to accept the book/movie/whatever on its own merits.

But artists must make it as easy as possible for readers to do this.

As an example, people know that in the real world animals can’t talk like humans do. But even so, we willingly enter the world of Watership Down to enjoy an epic masterwork of literature about rabbits who talk, organize communities, share and pass down mythological stories about their past, plan for the short and long terms, and defend their new home from invaders and dangers of all kinds.

The author, Richard Adams, bases his created rabbit society on the way that actual rabbits communicate and interact. As a result, he opens the door for readers to enter his world to enjoy his storytelling.

If storytellers ask too much of readers, we have much more trouble entering their world on its own terms.

When Suspension of Disbelief Fails.

So much Christian storytelling fails because their storytellers break suspension of disbelief. Their characters don’t act like real people at all, so their plots don’t sound even vaguely plausible. We can’t suspend our disbelief enough to pretend along with the artist that the plot is really happening in that setting with those characters. Their stories always feel jarring and imposed — and ridiculous.

Roleplaying games also require suspension of disbelief. Much of the DM’s job involves helping immerse the players into the game’s environment — and maintaining that environment through brief storytelling throughout the game.

In the clip above, the DM tried to immerse the players into the game. He (briefly) described the town setting of the game. Then, he eased Cousin Tyrell into the group by asking him to introduce his character to the other characters.

But Tyrell was not wanting to play someone else’s fantasy roleplaying game.

He had his own game in mind.

Everyone Needs to Be On Board in These Games.

A game needs everyone to be on board with suspension of disbelief. Everyone needs to be willing to play the game in the same way. If someone isn’t taking an element of the game seriously, everyone suffers to some extent.

For example, a game featuring permadeath doesn’t allow a character who dies to be revived. Once characters die, they’re dead forever. These games tend to be very heavy on immersive roleplay, which means players must behave ingame as if they’re “really” in the game. Thus, such a game asks players to roleplay as if their characters were real people: to take careful risks (and avoid excessive ones), to treat death as a devastation for those left behind, to mourn characters who die (as appropriate), and to consider the taking of another’s life as a very serious taboo.

In this comedy sketch, when the DM realized that the other two players wanted to play Tyrell’s game instead of his own, he just couldn’t deal with that. Rather than face defeat, he left the game entirely. Luckily, Tyrell was more than willing to assume the role of DM for the evening, while the other two players were more than willing to enter his world on its own terms.

If I haven’t hinted enough at this truth:

Churches operate in much the same way as roleplaying games. As such, they require suspension of disbelief on the part of the Christians parked in the pews. Everyone must roleplay as if they believe all that stuff. If someone acts out-of-character, it wrecks immersion for everyone.

I’ve mentioned before that I never got any serious pushback for my beliefs until I entered college.

But once there, oh boy did I ever get pushback.

What bothered me way more than direct pushback, though, were people who very obviously didn’t take Christianity’s claims at all seriously.

I’d lived and moved through a world that always at least paid deference to my belief system. In such a society, it’s very easy to take that deference for granted. When people stopped it paying that deference, it jarred me into considering how entitled I’d been. I began questioning how worthy my beliefs really were to receive and expect that deference.

And as you can guess now, I soon found it severely lacking in worthiness.

Not, in Fact, the Only Game in Town.

But perhaps more devastatingly to my beliefs, I discovered that Christianity wasn’t at all absolutely necessary to everybody on Earth.

That sounds like one of those DUH observations, perhaps. But like a lot of authoritarian Christian groups, mine taught that every human ever born suffers from “a god-shaped hole” in their hearts. Thus, when they encounter a TRUE CHRISTIAN™, all outsiders to the tribe will ache for what that Christian has.

Like every one of my beliefs, that one did not survive its collision with Reality.

Indeed, as I’d soon discover, plenty of people seemed perfectly happy without my religion! They were living contradictions to a great many doctrines my tribe believed about them, in fact. Non-Christians weren’t actually sad heathens with empty lives who longed for the superior moral framework and meaningfulness of Christianity. Nor were they even objectively worse people than we were.

In fact, non-Christians and fake Christians all seemed a lot happier than my TRUE CHRISTIAN™ tribe, as well as more honest and law-abiding than my tribe could ever be on their best days.

Thanks to that broken suspension of disbelief, I went from thinking Christianity was literally the only game in town, to thinking it was the best possible game, to finally realizing that it was just one of many games people play — and not even a good one at that when compared to other ones.

Reduction of Options: The Authoritarian’s Choice.

It disturbs me when authoritarians decide that the way to regain their dominance is to severely restrict the choices their victims can make. Such desires tell me that they know quite well that nobody sensible chooses to join them, but must be forced to do it.

That’s what we’re seeing with the Christian strategies we’ve reviewed lately. Toxic Christians want children to be indoctrinated very young, so their worldviews contain the underpinnings of authoritarianism that Christians need to sell them this nonsensical religion. For their own children, they add to this indoctrination a strategy of building very tall walls around their tribe that prevent those children from ever realizing that this ain’t the only game in town — or even a good game.

Authoritarians in dysfunctional groups have a lot of trouble maintaining dominance in a free market. They always have. As Christians have lost their coercive powers, so too has dissolved their control of the Happy Pretendy Fun Time Game of religion itself. Now, we’re finally seeing how compelling their game really is on its own, without artificial props. Reality blows their myths about early explosive growth right out of the water!

They can’t just play their game in their own corner — they need all of us to play along, or everything just feels silly and weird. But more and more people are opting out of even pretending to care what these lackluster DMs want.

The next few years ought to be interesting, as these authoritarians’ cultural power dissolves further and further and their game’s flaws get exposed more and more.

NEXT UP: Some brief words about Thom Rainer’s advice to dying churches.

You can also support this blog at no extra cost to yourself by beginning your Amazon shopping trips with my affiliate link — and, of course, by liking and sharing my posts on social media!build-a-bear Christianity

This blog exists because of readers’ support, and I appreciate every single bit of it. Thank you.