Hi and welcome back! One long-running interest of mine has been authoritarianism — and its effects on individuals. We got a real object lesson in that topic this week. Donald Trump Jr. released a video a few days ago in which he released his most cringey weirdness yet. Today, let me show you what this aspiring tin-pot dictator said — and how his behavior reveals his deeply authoritarian nature and upbringing.

Donald Trump Jr.: Almost As Repulsive As His Dad.

Don’t get me wrong. They’re both repulsive and cringey people, Donald “Stank” Trump Jr. and Kimberly “Screeching Banshee” Guilfoyle. But Donald Trump Jr. managed to eke out a narrow victory in the repulsive-witless-cringey-race against his longtime girlfriend. I know. I’m surprised, too.

First, this unspeakable cad unleashed a vicious barrage of aggressive insults at the woman he supposedly cares deeply about, right on camera. Then, after having verbally shellacked his own girlfriend, he decided that he’d created the perfect video to put on his social-media page to wish his tens of fans well on the holiday.

And she just stood next to him smiling the whole time, like tee-hee, isn’t this just HILARE, the man she supposedly cares about is telling the whole wide world that he mistreats her on purpose.

As we’ll see, though, his verbal attack on her perfectly reflects an authoritarian mindset.

Here’s the original link on Facebook — he hasn’t taken it down yet, probably because he’s incapable of feeling shame. At five minutes and change of blathering, it’s way too long to expect anybody to sit through it. I’ve found a slice of the relevant minute we’ll be covering today — and I’m embedding it below:

First, Donald Trump Jr. wishes his audience a Merry Christmas, while Kimberly Guilfoyle chimes in with the same. Then, he runs through some special groups he especially hopes have an especially nice Christmas.

To his increasing and visible annoyance, though, his girlfriend keeps chiming in as if to remind him not to forget this-and-that group.

And he is increasingly irritated and displeased with her for doing it, even though he very obviously needs the prompting.

Then, Donald Trump Jr. looks at his girlfriend as if calculating exactly how to retaliate for her unthinkable daring. He says, with the sleaziest smile imaginable on his face:

“And I’m reasonably thankful for Kimberly. Not so much. I mean, I don’t wanna — I’ve managed to maintain a very low bar with Kimberly, so I don’t want her to get, you know, I dunno…”

Meanwhile, his girlfriend breaks into the fakest-sounding giggle I’ve ever heard out of a human. Usually, I’d expect a pulled string to be the source of such a noise. Looking up at him with this absolutely frozen smile on her face, she offers up the word “Accustomed?”

But her twit of a boyfriend is still struggling to find the right words to cut her down to size, right then blurting out “… too big an ego…”

And I — and a lot of other people — were absolutely speechless at this absolutely disgusting performance.

Plenty of people have reacted to Donald Trump Jr.’s weird behavior already. That kind of shocking misogyny definitely catches a lot of attention.

I mean, a couple of weeks ago we thought Donald Trump Jr. had hit his limit of awful behavior. That’s when he voluntarily released his infamous “Motel 6” video. In it, he ranted incoherently while apparently blitzed off his ass or tripping balls while sitting in what appeared to be an inexpensive motel room. Even one of his ex-mistresses had no idea what to say about that one.

Well, “Stank” beat that performance and then some with this bizarrely aggressive Christmas video. (His daddy seriously needs to hire his lump of a son a good social-media manager.)

But I wanted to pull back to the way his behavior toward his girlfriend reflects what must have been a truly brutal authoritarian upbringing.

Authoritarian-raised children learn some truly monstrous lessons. These lessons revolve around the nature of power — how to gain it, how to wield it, and how to protect it.

Self-sufficiency becomes the primary virtue of an authoritarian, because it is the only way in that culture to keep one’s own power safe and build upon it.

Authoritarian children learn to see the whole wide world as enemies about to strike, potential allies who can and will turn on them in an instant, or resources to be mined. They cozy up to the former and obey as little as they possibly can to maintain the peace while they carefully navigate around the second group. And they learn to ruthlessly exploit the last group.

In that environment, yes, kindness does equate to weakness. Showing kindness reveals weakness in the person showing it. Needing kindness, meanwhile, becomes the unforgivable sin.

Accepting kindness can go either way depending on how it’s done. It can indicate strength if it’s grabbed with both hands in the authoritarian’s all-or-nothing way, or it can indicate weakness if it’s later used to punish its recipient. Usually, though, authoritarians know that it’s risky to accept kind gestures from others.

It’s no accident that a lot of child-abuse stories involve the abusers’ goal of “toughening up” victims, especially male victims. One report includes this exact motivation in one of its diagrams about the bio-psycho-social model of male violence (p. 68 — watch out, it auto-downloads). That entire section sounds like it could be describing Donald Trump’s parenting philosophy to a tee:

I don’t bring this point up as an excuse. It’s not. I’m just sayin’ that authoritarianism can be really hard to shake once it’s taken root in a child’s mind. That said, Donald Trump Jr. is in his 40s now. That’s more than old enough to start getting his childhood damage sorted. I mean, this 40-something man behaves like a badly-raised 13-year-old on his good days — like a lot of evangelical men we’ve seen over the years, he seems locked in early adolescence emotionally. He needs a minder and handler too, but I can easily imagine him bristling hard at the very idea.

As well, I can easily imagine Donald Trump Jr.’s father talking the same way about him that he talks about his girlfriend.

Sure, that would make Donald Trump Jr.’s recent video even more paternalistic and creepy and weird than it already was.

But y’all, we’ve come this far together already — why not take the train to its very last stop?

The Constant Jockeying for Power.

We’ve seen fundie men act this way before, though we haven’t talked about it for a while. Some years back, I reviewed a super-creepy “Open Letter to My Future Wife” thing that some guy wrote about a mythical woman he hadn’t even met yet. It was hard to figure out if he was talking about a future daughter he planned to raise alone, or an adult woman he wanted to mold like Professor Higgins did Eliza Doolittle in My Fair Lady.

In this case, I hope Donald Trump Jr.’s girlfriend realizes that if her boyfriend behaves this outrageously toward her in public, he’s quickly going to treat her way worse in private if he isn’t already.

Authoritarians are stone-cold hypocrites, the worst imaginable, and Donald Trump Jr. already strikes me as a particularly erratic example of the breed.

Really, the more I see out of Donald Trump and his utterly dysfunctional family, the less I want to see of the lot of them ever again. But I must say that every time I check in on them, I understand evangelicals’ undying idolization of him just a little bit better.

Donald Trump Jr. could be any big-name evangelical’s son (like Jerry Falwell Jr). I don’t know what his religion is, but he and his father fit perfectly in the evangelical tribe. No wonder they adore his father so much.

Last thought: If this sketch were done in America, I’d fully expect to see all of Donald Trump’s adult spawn competing: 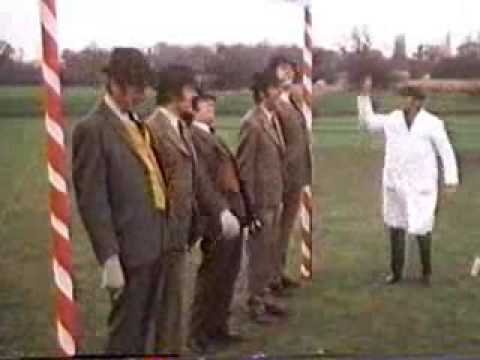