I’ve got more to say on the topic of recent political events in America as we lurch our way to the election itself, but I did want to mention this now while it’s fresh in my mind:

Michele Bachmann, a former US Representative from Minnesota and infamous religious fanatic and right-wing-nutjob, has decided that obviously all this negative publicity emerging about her party’s nominee is happening only because of a Democratic conspiracy.

Yes. She is claiming that Democrats released the tapes and orchestrated the entire drama.

In her  batshit-delusional opinion, the big problem here is NOT that Donald Trump said this shit at all, but that he was exposed. And we all need to quit talking about it because, I suppose, it’d really help her out if we did. She refused to comment about how she felt about the comments themselves and focused solely on how meeeeeeeeeeeean Democrats are.

We’ll ignore that there’s no sign as of yet that Hillary Clinton had a thing to do with the exposure. Certainly the original bombshell of a story in WaPo doesn’t mention where anyone got them. And honestly, that doesn’t particularly matter.

If Donald Trump hadn’t said that shit, there wouldn’t have been anything to expose or reveal.

When have we seen this attitude before?

Oh yes, that’s right: Pretty much every single scandal that’s come out of the Religious Right. Their entire mantra is that if nobody’s objecting to their behavior, then obviously they’re not doing anything wrong. If anybody exposes their behavior or criticizes it, they tend to concentrate solely on silencing those people and hushing up the scandal–thus making it so nobody’s objecting to their behavior. As I noted years ago and just last week, their entire system is geared toward punishing communication.

Michele Bachmann is a die-hard fundagelical. She’s never met a right-wing talking point she didn’t like, nor a conspiracy theory she couldn’t subscribe to. You name it, she’s probably hip-deep in its orbit. Once she’s signed on to a hilariously skewed idea, she does not let go of it, ever. Once she’s sold, she stays sold.

So of course she’s going to latch onto this mystery conspiracy of Democrats to release the tapes and blame it on Hillary Clinton somehow. Of course.

Unfortunately, she appears to be totally mistaken.

People Magazine has unearthed someone with knowledge of the tape. Rob Silverstein, who works on a pop-culture show called Access Hollywood, was putting together a Donald Trump-focused segment. This tape was one of the clips his team retrieved from a vault of many, many tapes they’ve filmed of Mr. Trump over the years. Mr. Silverstein had to decide, with his production team, whether or not they wanted to use the startlingly sexist and rapey comments that were unearthed. They decided not to use them. That was mid-week. By Friday morning, they’d decided not to run the story at all. That’s when they found out that David Fahrenthold, the WaPo reporter, had the 2005 tape.

Mr. Silverstein says he didn’t give the tapes to the reporter who leaked them; in fact, he adamantly denies that he had anything to do with it. For what it’s worth, he says he doesn’t know who did. Mr. Fahrenthold didn’t say where he got it from, either.

So Michele Bachmann is either lying, or working off of information she alone has access to that nobody else appears to possess yet–and one also wonders how she’d work in the Howard Stern tapes.

I know which one I’m going to assume is the case until facts demonstrate otherwise, based on her past declarations of “fact.”

And the funny thing is, regardless of where the tape came from, the bigger issue is that Donald Trump said this kind of stuff at all. This is not “locker room talk,” as she characterized it. This is genuinely repulsive and creepy and horrifying stuff for anybody to say, and for her to minimize it and try to negate our rightful indignation and outrage like that tells me everything I needed to know about her even if I’d had no idea who she was until now.

Michele Bachmann is pulling another very standard fundagelical tactic here in trying to shift focus to something she thinks she can better manage instead of the real problem, which she cannot manage at all. This is a tactic we see constantly on display with Creationists (another group she proudly belongs to), who are positive that if they focus on the godlessness of scientists, the supposed moral fallout of “evolutionism,” and the myriad of other little side criticisms they have of real science and scientists, then somehow that will demonstrate the TRUTH YES TRUTH of Creationism–even if they can’t actually even credibly demonstrate even those unlikely points. It’s like they’re flailing around and desperately looking for something–anything–else that they can argue about, and they latch onto those extraneous and irrelevant points to fixate on.

It’s important that we not allow wingnuts to dictate the terms of engagement.

If Michele Bachmann has proof of her claims, then she needs to produce that proof in the making of the claim. If she doesn’t, then we’re free to dismiss it as yet another of her fanciful notions. And regardless of whether she ever does or not (because we know better than to hold our breath waiting for a fundagelical to offer credible evidence), we need to keep the conversation on the fact that Team Jesus fervently supports a candidate who talks like that. Even if Hillary Clinton personally asked for the tapes to be found and leaked, that doesn’t actually change that he said those things.

We need to not let them escape the fact that we’re watching them support a sexist cretin who is totally unfit in every single way for the office he’s trying to win. We need them to know that next time they try to claim some kind of moral superiority to the rest of us, we’re going to remind them of this whole Donald Trump situation.* If they haven’t enough of a sense of shame to turn away from him on their own, perhaps the prospect of lower sales will do it.

You don’t have to like Hillary Clinton; Team Jesus has, as John Oliver illustrates so ably below, spent decades demonizing her to the point where even some educated non-believers buy into the talking points about her and her supposed sins. I know she’s not perfect, and I know that that’s the other redirection tactic people are using in this situation to avoid the donkey in the room of her being the only viable candidate besides Donald Trump.

Regardless, this is not about her any more than it’s about where exactly those tapes came from. This is about Donald Trump. Someone who supports Donald Trump, for any reason whatsoever, is someone who is–whether they like it or not, whether they accept it or not, whether they insist otherwise or not–signing off on a man who is cruel, dishonest, petty, vain, rapey, creepy, vicious, sexist, narcissistic, racist, classist, thoughtless, shockingly rude, willfully-ignorant, and a host of other adjectives that are shocking in anybody but especially disturbing in a Presidential contender.

There is no longer a way to rationalize supporting him even in a “not Hillary” kind of way. He is a human dumpster fire. He is garbage. He is scum. He is disgusting on a level that I never thought I’d see even as I watched Republican politics sink lower and lower. Whatever someone might believe Hillary Clinton has done over the sum total of her career, it doesn’t and couldn’t ever top what he pulls in a given week.

We must not allow such a terrible human being to take office. And we must not allow Christians to dictate the terms of the conversation or tell us to shut up and look away from each fresh new revelation of just how morally bankrupt their clown prince and standard-bearer has turned out to be. 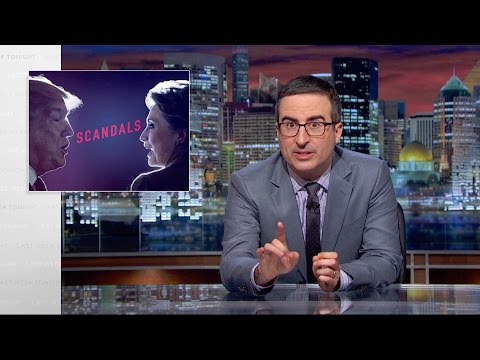 This has been a SPECIAL ELECTION EDITION of Roll to Disbelieve. Thank you for reading.**

* And some of them are well aware of this fact.

** PS: Registered to vote yet?

EDITED TO ADD: John Oliver has done a recent Trump-tape-related release that sums things up well. Hopefully this URL works for a while: