Hi and welcome back! In the wake of yet another mass shooting, unsettling and unsurprising details have emerged about the person responsible, Aaron Long. It turns out he’s one of many evangelical men who get taught to literally destroy anything that tempts them, rather than learning to manage himself and take responsibility for himself. In the wake of this crime, I’ve heard some big-name Christians trying their best to distance themselves from this violence. However, this criminal learned this exact response in evangelicalism and with evangelical leaders’ blessing. Today, let me show you how.

When the news of Aaron Long’s crime broke, I saw the guy’s picture and immediately pegged him as a hardcore Calvinist. There was no question whatsoever in my mind. Not only was he a TRUE CHRISTIAN™, but he was very specifically a hardcore Calvinist. I’m still not totally sure how I was so certain of these two points.

Very quickly, others found confirmation of these suspicions: yes, indeed, he considered himself a TRUE CHRISTIAN™. And yes, he did indeed hail from a very fervent Calvinist church — a Southern Baptist Convention (SBC) member church, in fact.

Also in fact, here’s his little spot of fame from their now-defunct website (archived here, though we’ll get into the Calvinism part tomorrow; just putting it out there for now):

Reuters has kindly brought us part of the contents of that 2018 video clip:

Long talked about his baptism and youth group in the seventh grade when a speaker discussed the biblical parable of the prodigal son, according to the Daily Beast.

“The son goes off and squanders all that he has and lives completely for himself and then, when he finds he’s wanting to eat pig food, he realized there’s something wrong and he goes back to his father and his father runs back to him and embraces him,” Long said in the clip. “And by the grace of God I was able to draw the connection there and realize this is a story between what happened with me and God.”

Yeah, “the grace of God” is required to make that connection, hmm? Totally.

In less than three short years after making this video, though, this youth minister’s son would demonstrate that his testimony was largely hopeful longing, likely topped with a heaping dose of religious euphoria.

That’s when Aaron Long decided to shoot up three largely-Asian-staffed massage parlors. He did it, he said, because he found them irresistibly sexually-tempting to him.

So his response, naturally, was to destroy the women there.

I’m old enough to be Aaron Long’s mother at this point. When I was his age, I was a true-blue evangelical lass. And I saw first-hand how church leaders taught the flocks to deal with temptations of any kind.

They taught us to destroy them.

Back then, evangelicals did a lot more book-burning than they do now. On one of these occasions, Biff happily contributed all of his gaming books, his secular music, and all the artwork he had once created in his pre-conversion days. (Say what you want: he was a talented artist, before zealotry poisoned his brain.) He didn’t want to give this stuff away, because it might tempt someone else into heathenry. That was his stated reason for destroying these works. And our church applauded him for doing it.

His best friend and my future brother-in-law, John, did not applaud. Instead, he got very angry — and rightly so. John had commissioned a couple of those art pieces with actual money paid. (Biff hadn’t gotten around to delivering them yet; they lived far apart by then.) As well, John had gotten Biff to promise to give him anything he no longer wanted due to his zealotry, and Biff had agreed. I even personally witnessed this promise. But Biff burned all of it anyway.

Biff feared John might become even more set in his heathenry. What actually happened was this move drove John even further away from such a controlling religion that turned its fervent adherents into such dishonest people.

Naturally, Biff didn’t care. He’d been taught to destroy temptation. And so he had. Our church leaders only praised him for this daring act of TRUE CHRISTIANITY™. He regretted nothing.

In evangelicalism, it wasn’t enough to throw temptations away. Tempting things had to be destroyed — and in the most ostentatious way possible.

That’s why, in the 2008 movie Fireproof, Kirk Cameron doesn’t just throw away his family’s shared computer. He takes a baseball bat to it. But there’s a lot more to this scene. 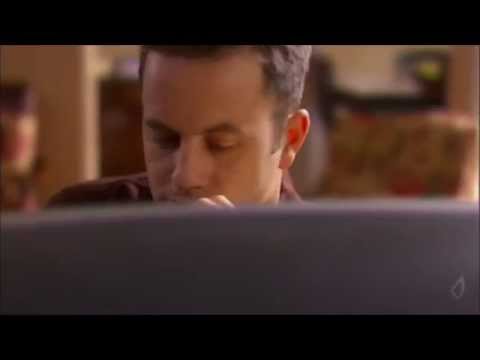 Watch out for parasites. A parasite is anything that latches onto you or your partner and sucks the life out of your marriage. They’re usually in the form of addictions, like gambling, drugs, or pornography. [. . .] If you love your spouse, you must destroy any addiction that has your heart. If you don’t, it will destroy you.

Kirk earnestly considers these words. Gradually, he lifts his gaze to the “Wanna See?” ad on his PC screen. Then, with heroic hip-hop music blazing up behind him, he gets up, grabs the (shared family) computer monitor, sets it on a garden table outside, and takes a baseball bat to that monitor.

By the way, check out the “Love Dare” on that transcript. At the end of each day, this book offers a busy-work assignment. This one reads:

Remove anything that is hindering your relationship, any addiction or influence that’s stealing your affections and turning your heart away from your spouse.

You will be restored if you remove unrighteousness far from your tent. (Job 22:23)

I remember reading so so so so many Christian men praising this scene and this section. Nobody noticed it said “remove,” not “destroy.”

Go ahead. Sure. Ask me where Aaron Long got the idea that he needed to literally destroy anything that tempted him to commit offenses against his imaginary friend.

The Party Line Gets Garbled by Reality.

And yes, evangelical leaders’ message does get garbled somewhat by the laity. I found an old essay by Steven Cole that cited Al Mohler fretting about sexual sin. In this essay, Cole doesn’t talk about destroying anything. He insists instead that Jesus-ing hard enough will guarantee anybody the ability to follow the tribe’s many rules about sexual expression. But he does advise his readers to go to extremes if they must to follow those rules:

If you are defeated by sexual sin, take whatever radical measures are necessary to get on the path to sexual purity. As John Owen put it (The Works of John Owen, Vol. 6, “Temptation and Sin” [Banner of Truth], p. 9), “Be killing sin or it will be killing you.”

I actually cringed reading that. And I wonder if Aaron Long heard it himself, considering who John Owen is:

John Owen was the foremost expositor of high Calvinism in England in the second half of the seventeenth century.

You’ll find John Owen stuff over at Calvinist International, too. And again, I promise: we will talk tomorrow about Aaron Long and the whole Calvinism thing. For now, just know that yes, indeed, dude learned his Jesus-ing from a hardcore Calvinist church. So it’s entirely possible he heard this saying at some point.

However, when Jesus-ing utterly fails to remove a human urge, and there is no street-legal way whatsoever to handle that urge, Christian zealots go another direction.

And their leaders can’t stop them or rein them in, even if they want to.

Speaking of Al Mohler, he offered up his own words on Aaron Long’s rampage. His words consisted almost entirely of distancing attempts and whataboutism, of course. He was very upset that news sources linked this killer to the SBC, so mainly Al Mohler wanted to tell everybody that Aaron Long was obviously not actually a TRUE CHRISTIAN™ or a member in good standing of any SBC churches.

But then he excuses the crimes as just the natural result of not Jesus-ing properly in one’s non-sex life:

[S]ometimes those struggles can turn very, very dark. Sometimes those very, very dark struggles can turn very, very violent. Now, we have to look at this case and come to an understanding of what we must learn from it, but Christians looking at the entire span of human history, and even at the revelation of God in scripture in the Old and New Testaments, know that we have ample documentation of just how twisted the human mind can become, just how corrupted and even perverted the sexual impulse can become.

Oh, okay. Sin nature. So basically, it’s absolutely impossible and meaningless to try to stop any of this, because not even the most fervent Christians can ever really eradicate their sin nature.

And Al Mohler has no intention whatsoever of trying to work out the very valid and pressing reasons why a self-professed TRUE CHRISTIAN™ man, son of a youth minister, apparent lifelong member from infancy of Mohler’s very own denomination, could ever possibly decide to go murder a bunch of massage-parlor employees.

It’s beyond obvious that Aaron Long had some very serious issues that his flavor of Christianity offered no real help at all in solving. Anybody who’s ever tangled with that flavor of Christianity knows immediately why, too. He got taught — just as Al Mohler and Steven Cole state — that temptation is evil and demonic, but also irresistible and endemic. He learned that correct Jesus-ing should fix all of his problems. But here, it didn’t. He Jesus-ed his little heart out, but he still remained fraught with sexual urges that his religion said were completely off-limits.

Even marriage wouldn’t have helped him, because what he wanted clearly had nothing to do with the kind of street-legal sex his leaders taught was humanity’s only option. His leaders, of course, continually stress that it wasn’t okay to marry to resolve one’s sexual urges (as Cole does in his essay). I’m pretty sure that most of my friends’ marriages back when I was Christian happened for this exact reason. But even if Long had tried that, I’ve no doubt he’d have soon seen the return of those off-limits feelings.

Whatever his leaders were telling him about dealing with his temptations, what he internalized from his culture was exactly what Biff did in the 1980s to great praise, and what Kirk’s character in Fireproof did in the 2000s to great praise. Their temptations were found in physical things; his were found in people that he clearly considered things. The end result was the same for all three.

Evangelicalism means that men never need to take ultimate responsibility for themselves. There’s always, always something they can blame for “making” them feel a certain way. And destruction comes very easy indeed to them.

NEXT UP: Aaron Long’s links to extremist Calvinism. See you tomorrow, friends.

Last thoughts: Another huge PR nightmare for the SBC. Who’d’a thunk? Tell me again how totes feminized evangelicalism is, all you SBC hacks in the Christ-o-sphere.