Hi! We have a fun post coming on Thursday about mockery and authoritarians. Today, I want to show you something hilarious: a stunning takedown of one of the best-beloved and grotesque movies of the Religious Right. Yes, you guessed it! We look today at Mel Gibson’s The Passion of the Christ. One of our commentariat, ssj, has created a fanedit of the movie that I loved. (You might remember him from a previous post and from his awesome monkey pictures!) And now, I will tiptoe out of the studio and let him take it away from here!

Critics decried the film’s anti-Jewish overtones and stark-raving brutality. Nitpickers noticed inaccuracies in the telling, such as the conflation of Mary Magdalene and a woman saved from stoning by Chief Justice Jesus. Aside from a smattering of individuals who claimed that the movie brought them back into the Christian fold, the secularization of the United States continued apace.

For what reason, then, would a sensible member of the Captain’s community ever want to view this piece of sadism? Morbid curiosity about Christian tastes? Insight into the guilt necessary to keep the faithful full of faith, the guilt over a supernatural transaction? Recommended viewing back in one’s churchgoing days?

But what if someone sprayed skeptical graffiti all over Gibson’s labor of love? Changed the storyline, a few characters, and all the dialogue? And edited out many of the violent bits, almost an hour’s worth?

I ain’t gonna lie to you. I did just that, and it took me a year. And Captain Cassidy has graciously allowed me to share it with the Roll to Disbelieve community in special installments. After today’s episode, they’ll appear in sporadic Lord Snow Presides in coming weeks. Some of you have seen bits and pieces of the edit in the comments section; now I bid you to enjoy more.

Before we dive into the first part of the movie, let me share with you the trailer, also previously aired in the forum. 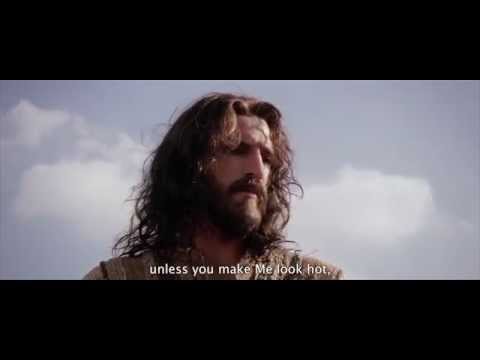 Jesus likes to do it crazy sometimes.

When I first started the project, I considered several title candidates, including A Godwork Orange and The Mashing of the Christ. I eventually settled on Godsmacked for its simplicity. . . and its utter subtlety.

My rewriting the dialogue would not have been possible without Gibson’s aesthetic decision to conduct the story in dead languages, particularly Aramaic and Latin. This seemed sensible, since Jesus most certainly did not speak North American English, though many Jesus movies totally correctly identified Romans as having British accents (/s). Never mind that Gibson had screen Jesus speak both Aramaic and Latin, whereas the historical Jesus most likely never picked up the latter. To Gibson, Jesus was a godling, and godlings that aren’t multilingual are just plain lazy. (Why the holy tend to be illiterate is another matter.)

Against the audio backdrop of languages I didn’t understand, I scribbled new subtitles for Jesus and his playmates. This allowed me to restructure the story almost without restriction, and the end result is something that would drain the blood from the Pope’s face and brain if he ever saw it. No longer are you, the viewer, responsible for Jesus’s death. That’s right—someone else is.

Removing much of the bloodletting makes for a more civilized and merciful viewing experience, and a briefer one, as well. But it also concentrates the speaking parts, which in turn allows for a greater density of subtitled mockery of both Gibson’s film and Christianity’s undergirding.

In a subsequent post, I’ll detail the changes made to the theatrical release.

Let’s plunge right into actual Jesus footage. Enter the password “r2d” to view this segment of Godsmacked, and please adjust the resolution to the highest your bandwidth will permit. (Vimeo allows for a maximum resolution of 720p for free accounts. The original edit is in 1080p and contains other goodies, including a commentary track.)

Disclaimers: Fair use laws allow for the use of copyrighted works for the purposes of criticism and commentary, and in this case, the new subtitles completely alter the meaning of the The Passion of the Christ. In order to edit the film and present the transmogrification, I bought a legitimate, studio-released Blu-ray of the film. . . albeit a used disc, since I didn’t want to enrich Gibson and company any further.

NEXT UP: I’m back! Did ssj eat all the nachos? So… why do authoritarians hate mockery so much? We’ll explore that question next. After that, we’re going to look at how Ed Stetzer accidentally-a-fake-news into his tribe’s headcanon. See you soon!