We’re now at day 21 of Mark Driscoll’s arrival to Patheos and the novelty hasn’t worn off yet.

The Washington Post openly asked just a few days ago why he’s here at all, though that question is far more properly leveled at whoever’s in charge of running the Evangelical channel (I don’t hold the owners of Patheos as a whole responsible for any blogger’s presence or absence from the site–after all, they don’t mind me being here, and I probably piss Christians off as much as fundagelicals piss everyone else off). The writer of that article goes on to say:

One shudders to think of the abuse suffered by what wives, daughters and other women in the lives of men who follow Driscoll’s teachings have endured.

And he sure hasn’t particularly sounded sincere about the few wishy-washy apologies he has offered, much less demonstrated any ability to learn from his mistakes. As recently as May 2017, he was declaring that the big problem at Mars Hill was “governance,” meaning he blames his elders for his ouster and claims that they wanted him gone and for the church to dissolve. Mark Driscoll’s story, of course, runs counter to the memories of everyone else involved, but we could have guessed that since it was the version of the story most flattering to Mark Driscoll himself. Mark Driscoll has a real affection for revising history that way.

Others have noticed his presence here besides WaPo. One progressive Christian blogger writes about why he isn’t jumping ship, offering up the usual double-death-dog-times-infinity unimpeachable excuse: “it’s not a space where I’m feeling called to organize right now.” Actually most of the progressive bloggers seem upset about Driscoll’s arrival, as are many of his fellow evangelicals (who see his ultra-sexist dudebro act as his personal failure at the otherwise-Jesus-approved and perfect doctrine of complementarianism, which we’ll be taking up next time, I think).  Another Christian punts to Jesus and hopes that her god will “protect and spare us all from his servant, Mark Driscoll,” though it seems clear that her god hasn’t ever seen fit to do anything about Driscoll’s abuses. Wartburg Watch has a grab bag of other comments wondering about how this could possibly have happened.

In many places I looked at, commenters pointed out that Driscoll is very far from the very most objectionable blogger on the site–there is also a Scientology blog, as just one example, though it gets very little action. Others talk about how much money this guy is getting overall from donations and royalties, possibly hinting that the blog isn’t bringing in all that much money to Driscoll–particularly since he still does not allow reader engagement on it.

Over on Twitter, where most of Patheos’ site posts garner little to no chatter generally, their post announcing Mark Driscoll’s arrival hilariously got hundreds of comments, almost all of them negative–and, um, 12 likes, which I’m betting are all from people who are blood relations to Mark Driscoll and don’t yet hate him. Also I noticed that progressive leader Tony Jones, who has no room whatsoever to talk, saying “Farewell, Patheos” in that comment thread; he stopped blogging here in 2015 so I guess he means he’s not reading the site anymore. And one awesome commenter just posted a GIF:

Whoever is running the channel, they haven’t said anything public after that announcement, as far as I know.

And Mark Driscoll, the poster boy for fundagelical abuse, hypocrisy, sexism, bigotry, and overreach, is sure as hell not issuing any apologies or showing the least amount of contrition, much less showing people how much he’s changed in the brief time since he fell into disgrace. Instead, he’s recycling content from his previous books and sermons about, um, well, demons.

Isn’t that a weird kind of priority to have? He’s just ignoring the elephant in the room, which is of course himself, to regurgitate fundagelical talking points about supernatural boogeymen, when a very real bad guy is right here before our eyes. The whole situation could not be more surreal if Driscoll were wearing a striped sweater and a hockey mask in his videos.

I began noticing a trend in his posts about demons, and maybe you will too.

In part 1 of his series on demons he asks: “What’s Spiritual Warfare and what’s that got to do with me?” and secondly, “What does the Bible really say about spiritual warfare?” Because obviously fundagelicals don’t know anything about that topic, since it’s only drilled into their heads 24/7 by super-polarizing leaders. And that’s all Christian readers will be getting in the post: fundagelical talking points that make Christians feel oh-so-warrior-like and get them gung-ho for their culture war battles against human rights. About the only thing of note in the whole post is the very weird insistence toward the end that people who don’t buy into fundagelicalism are “tortured and brainwashed” until they convert to his flavor of Christianity. Considering the horror stories that emerged (and to an extent are still emerging) from his time of leadership of Mars Hill, that’s a weird thing for him to say.

In part 2 of the series, Mark Driscoll leads with that ugh-worthy quote from the 1995 movie The Usual Suspects (he misspells the movie’s name and fails to use proper italicization or apostrophes for it, probably because he just cut-and-pasted from other writing done long ago) about how “the greatest trick the devil ever pulled was convincing the world he did not exist.” Christians love this line because it basically gives them an excuse to create a worldview that is impossible to test. They don’t look more deeply into the quote than that or wonder what their love of the quote says about their own god. Mark Driscoll is never going to be accused of a really deep thinker or a decent human being–both of which are very likely why he gravitated toward his particular blend of hardline fundagelical Calvinism, two worldviews that only become exponentially more cruel and inhuman when merged together, like vehicles coming together to make one of those big robot warriors in toy lines from the 80s and 90s. (Feel free to delve into that movie quote below–we were only just beginning to toy with it the other day, I thought.)

His actual questions about demons here are: “What do I need to know about this Enemy who wars against me?” and “How do Satan and his agents tempt us today?” And here I have to ask exactly who is asking any of these questions; it sounds suspiciously like Mark Driscoll just pulled them out of his nethers, sorta like how Libby Anne thinks that Debi Pearl makes up questions that she claims are from readers of hers so she can trot out her talking points against feminism of any kind.

In part 3 of the series, released today, Mark Driscoll gets serious!

First he gloats about how his god has totally already won against a “doomed, limping enemy.” (That belligerent combativeness of his hasn’t abated at all.)

His only question in this post is “What specific tactics does Satan employ against us today?” which he answers at length with both regular fundagelical talking points and quotes from The Screwtape Letters by C.S. Lewis. Again, he ends up with a worldview that simply can’t be tested. People who believe in his religion get tested and tormented by Satan, but so do people who don’t believe in any of that piffle.  There is simply no way to know for sure whether or not a god or a demon is doing anything, much less to tell when no god or demon is involved in anything.

I’ve given you archive links to all of his posts (and any other posts from people I don’t like, because screw them). So let’s take a look at that third post, shall we? And maybe we will think of questions that we, in turn, would love to hear Mark Driscoll answer.

I Have Several Questions About This.

Not an Accident At All.

Christians are quite right to look askance at Mark Driscoll’s triumphant return to the public sphere–or, well, as public as a blog that has comments turned off can be, I guess. He is showing even less self-awareness here than he normally does, and it isn’t hard to notice that the copyright dates on the books he’s adapting for these glurge-fests are from times when he was at his most despotic, proud, cruel, malevolent, dishonest, and misogynistic. At the same time as he was demanding that women perform oral sex for their husbands without question or backtalk because “Jesus” ordered them to do so (through him), he was working on the book that would become Death by Love (2008).

I don’t believe that his blog series about demons is an accident, either. He chose this topic very deliberately out of all the thousands and millions of topics he could have run with, and there’s surely a reason for it. Me myself, I think he’s greasing the wheels for another pastor position, or maybe to continue with his second career as an author or public speaker. And I think the very last thing he wants is for people to ask real questions of him–questions he can’t answer, questions he won’t answer, questions he doesn’t even think he needs to answer.

But we will ask anyway.

What say you, Roll to Disbelieve readers? In this off-topic Monday post, what would you ask Mark Driscoll if you were on his blog and could comment there? What observations would you make? (If you don’t wanna talk about him, this is an off-topic post: feel free to talk about anything else you want! Also, our rules still apply for comments.)

And because the kittens had their second birthday recently… here’s one of the first videos of them I ever made, just a couple of days after they’d gotten here. As you can see, they settled in very quickly: 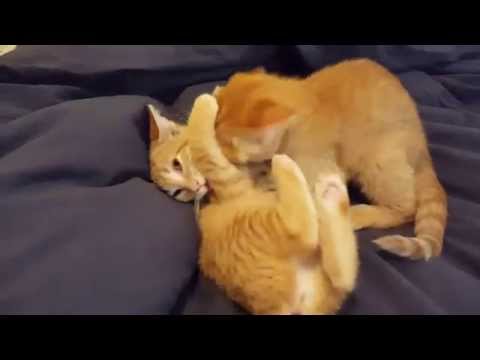 They’re tussling again today for some reason, so it made me think of this video. Their play-fighting is still just this cute and adorable.