Hi and welcome back! That movie we reviewed not long ago, Only God Can, sure sparked some thoughts in me. Now we’ll look at the last of them: the idea of the Perfect Sales Pitch for Magic Christians. Oh, sure, we’ve covered Magic Christians a few times. Their leaders teach them a certain set of expectations regarding their sales marks, and from there a certain set of skills that they acquired over very long careers as Jesus hucksters. Today, let me show you what the Perfect Sales Pitch looks like–and why Magic Christians can’t let go of the idea.

(Previous posts about this movie: Pre-Review Warmup; The Poor Widdle Heathens; The Jesus Beatings Shall Continue Until Salvation Improves; What Conversion Did For The Heathens.)

So first, let’s look at what actually converts the three heathens in Only God Can.

Coley reigns as the group’s dysfunctional queen bee and ringleader. She needs love and a sense of meaningfulness in her life–and maybe a cure for her late-stage alcoholism. When she overdoses on booze and pills, her TRUE CHRISTIAN™ friend Sara flat-out preys upon her vulnerability to shove a Bible in her bandaged-up hands. Sara tells her that Jesus loves her and that Christianity will provide her meaning in life. Coley believes it and converts.

Glen is a hardworking businesswoman who feels completely neglected by her family. She aches for someone who’ll pay attention to her and treat her well. This desire leads her into an online affair–and when it’s exposed publicly in a way that would absolutely NEVER happen in real life, the Southern court of public opinion savages her. Right at her lowest point, her TRUE CHRISTIAN™ friend Sara flat-out preys upon her vulnerability to tell her Jesus will totally forgive her and love her to pieces. Glen believes it and converts.

Patrice is a businesswoman by day and celebrated social-justice poet by night. But alas! Zut alors! She totally forgot to get married and make babies! Now she’s upset that she missed out on these life-elements. At her loneliest point, her TRUE CHRISTIAN™ friend Sara flat-out preys upon her vulnerability (and, well, really all of the women’s vulnerability) to arrange for a TRUE CHRISTIAN™ guy to sing-whine a song about Jesus at their friend Gracie’s funeral. This song hits Patrice right in the feels. She realizes she’s gotten this Christianity thing totally, completely wrong, but the song set her straight. And since that misunderstanding was literally the only thing holding her back from joining the tribe, that’s exactly what happens.

Many Christians, especially those interested in evangelism (also called soulwinning if the person doing it is an amateur and not, so to speak and to borrow Biff’s term for it, a professional Christian), consider themselves Magic Christians.

Magic Christians think–erroneously–that they know exactly why their sales mark of the moment refuses to convert. They get these ideas from their irresponsible leaders, who need the flocks to believe, in turn, that their beliefs are not only true but simple and compelling once understood properly. Therefore, the Big Problem Here with people rejecting Christianity is that something stops them from understanding things well enough.

You can spot Magic Christians by their insistence on barging into conversations that didn’t even remotely involve them to psychoanalyze someone who has rejected their religion. They will always assume that they have the magical explanation that their mark needed to finally understand TRUE CHRISTIANITY™. They’ll be the ones to finally clear up that tragic misunderstanding the mark had. See, nobody in that mark’s life has ever, ever, ever known the magic combination of words to say in the magically correct order to clear up that confusion.

And once a mark finally understands the magic explanation, then nothing hinders them from converting (or re-converting) to TRUE CHRISTIANITY™.

Evangelicals in particular tend to fall for this self-serving style of thinking, but other Christians can fall into it as well. The ingredients for this foul sandwich are few and simple, and they transcend denominational lines:

In essence, Magic Christians think they know us–and our reasons for disbelief–better than we ourselves do. And aren’t we just the luckiest toddlers ever to have Mommy and Daddy helping us over our disbelief so we can become mini-Jesuses like they are?

Many times, Magic Christians think Jesus himself is spoon-feeding them privileged information about their marks. And similarly, they often think that Jesus himself has commanded them to leap into other people’s conversations to share these supposedly-divinely-granted insights.

Why Magic Christians Insist We Reject Their Sales Pitches.

Toxic Christian leaders have created a wealth of simple, easy-to-defeat reasons for their marks’ previous rejection of Christianity:

These reasons aren’t actually true. But hey, one can’t have everything.

And Magic Christians put total faith in these pat, easy-to-remember fake reasons. When evangelicals talk about non-Christians being idiots or liars or worse for rejecting their religion, as this beyond-atrocious YouTube cooking channel jackass does, they are very likely serious.

If the reasons are simple, their solutions are even more so: some careful massaging of a dealbreaker (like the Problem of Evil) with apologetics sleight-of-hand, or a reframing device that turns an atrocity into divine wisdom. And these solutions are universally and immediately successful.

Winding Up For (the Perfect Sales) Pitch.

Magic Christians think that people’s reasons for rejecting Christianity boil down to simple and generally childish and emotional reasons. As a result, their sales pitches tend to take similar lines. Their favorite evangelists and apologists tell them that these pitches work when properly executed, and they believe it. (Oof.) Since their worldview doesn’t admit feedback, the flocks can’t engage with reality. They don’t accept that their tactics are ineffective at best, disastrous at worst.

Maybe that’s why their metric for success generally consists only of making the pitch.

If someone actually converts after this treatment, they’ll take it of course, but they know that this happy ending almost never materializes in the real world. One can almost see them reacting like these evangelists in the British sitcom Black Books, uncertain of how to react when someone actually accepts their invitation to chat! 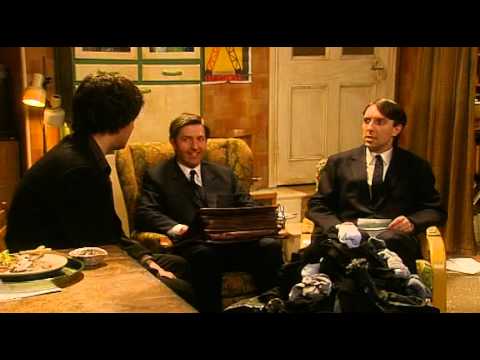 These are billed as “Jehovah’s Witnesses” in the video title, but the visitors never actually say what flavor they are.

There’s certainly no shortage at all of evangelists and apologists offering up advice about how to persuade the “lost” to join the tribe. Here’s a small sampling of the general strategies:

When the mark rejects Magic Christians’ intrusiveness, unseemly predation, and awful attempts at cold reading, of course, they take for granted that the mark is lying. After all, they’d absolutely lie in that position. Then they comfort themselves as they slink away by thinking poutily that they totally planted seeds in that person’s mind.

Any day now, those seeds will sprout into a conversion. Yep.

One Objection Per (Unwilling) Customer.

All of these strategies assume that most people reject Christianity for one reason. For example, someone might have stayed Christian forever–except their pastor was mean to them. Or someone just can’t buy into Creationism. Or they’re so angry about their mom dying of cancer that they deconverted on the spot and now hold weird anti-theist demonstrations in their philosophy classroom.

So once a Magic Christian deals with that objection, their job is done–save for escorting their mark through the Sinner’s Prayer, of course!

Nothing could be further from reality, however.

But that truth defies the toxic Christian need to have loose ends neatly tied up with a bow. Something about complexity frightens that kind of Christian.

(Sigh. I was exactly the same way when I was one of ’em.)

Tying This Movie Up With a Bow.

And that observation seems to be a good place to end our examination of Only God Can.

All in all, this movie wasn’t the hands-down worst one we’ve ever seen. That honor would likely belong to one of those Thief in the Night things. It had decent production values and the acting wasn’t bad.

Really, its worst “sin” is its glib, callous handling of its characters. The second worst is surely the movie’s insistence that its religion is attractive to those outside the tribe. (Third? The projection. Everything bad that the movie shows fake, inferior Christians doing, I’ve personally seen legions of TRUE CHRISTIANS™ do.)

Nothing about the Christianity on display in this movie sounds even remotely appealing. It will definitely not be inspiring any revivals. The TRUE CHRISTIAN™ characters don’t have lives anybody would want, and they all come off way different than their creators should be wanting them to look. The depiction of their god seems hateful and uncaring, running totally at odds with how the characters all insist they see him. Only the most powerful of antiprocess deflection techniques could possibly allow Christians to keep making movies that make their religion and their god look so absolutely repulsive.

But it’s not meant for us.

It’s meant for middle-aged fundagelical women who think of themselves as TRUE CHRISTIANS™.

Everything in Only God Can seeks to validate the life-script that toxic Christian leaders demand these women follow–or to threaten them with will happen if they deviate from it.

This movie also tells them that their heathen friends all secretly ache for what they erroneously think they have: their Jesus Auras, their imaginary friend, an ideal social system. Oh sure, those heathens might reject them outright, but that’s only because they haven’t found the perfect sales pitch to sling them–yet.

And if this movie inspires middle-aged TRUE CHRISTIAN™ women to prey a little harder on any heathen friends they might have, well, then that’s all the better.

The tribe sure ain’t growing these days, and even a total failure resulting in estrangement will only serve to bind this movie’s target audience closer to their fleecers.

NEXT UP: We look at the sitcom reality of revivals–and what they show about Christianity’s current state and its future.

Also please check out our recent Graceful Atheist podcast interview! It was a blast.

Epilogue: While writing this post, I ran across a website called jesuscares.com. You can probably imagine how I parsed that URL at first. Took me a moment!