Hi and welcome back! Recently, we discovered Josh McDowell’s son Sean. As is typical of big-name apologists’ spawn, Sean entered the family business himself when he came of age. Shockingly, he reached the big leagues almost immediately. Not-so-shockingly, however, he brings nothing new to the apologetics table at all. For Easter, Sean McDowell created a video about the Resurrection. In it, he claimed that the Resurrection answered three very important questions. Today, let’s tackle the first of Sean McDowell’s questions and see how well he answered it!

I suppose I must have an innocent heart. It still amazes me to see how shamelessly Christian apologists market themselves.

It amazes me even more to see the trust the flocks place in that marketing.

Sean McDowell’s website subtitles itself “BRINGING TRUTH TO A NEW GENERATION.” But we’ve already seen plenty out of him to tell us that his work consists entirely of the same old glurge, bad arguments, talking points, conspiracy theories, pseudoscience/junk history, and emotional manipulation that apologetics is already full-to-bursting with.

He’s just younger than the current crop of older white dudes in the field, that’s all, and he markets himself tirelessly and with the savvy of a person born to the task.

Consequently, evangelical parents and pastors think he can totally talk to kids today.

Yay, Another Science- and History-Based Apologist.

Many flavors of apologetics compete for Christians’ time and money. All of them utilize arguments in lieu of real evidence to PROVE YES PROVE that their supernatural claims are true. However, they construct their various arguments around different cores.

Some apologists go in for very fancy high-flown legal-sounding arguments with pedigrees a mile long. William Lane Craig (WLC) has all but based his entire career on one of these.

Others go for a form of apologetics I can only call wishful-thinking based, because it’s just so soft-focused. This kind of apologetics portrays a god who is good and loving no matter what reality says. The apologists who dwell here shy away from the crueler end-game conclusions of the religion’s source material. Long ago, I set C.S. Lewis into this category.

For my money, though, the most hilarious and spectacularly-failed apologists of all are the ones who try to warp science and history into support for their claims.

This last camp appears to be where Sean McDowell has set out his professional shingle. Most of his work centers around using his tribe’s extensive library of pseudoscience and junk history to PROVE YES PROVE that Christianity is based on reality. 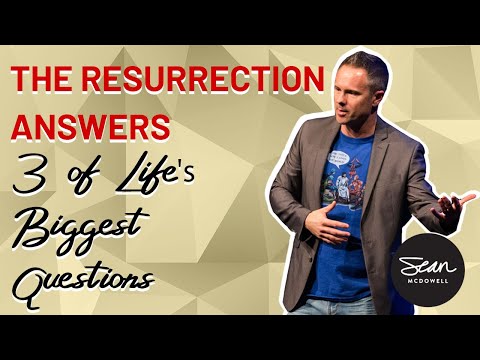 This isn’t a very long video — just over 7 minutes. It begins with Sean McDowell in his trademark tryhard youth-pastor getup: duckbutt hair, blazer, t-shirt. I suppose he’s in his office, which contains an impressive array of dead basketballs, footballs, and caps on a bookcase. This guy gives me the world’s worst case of secondary cringe. He’s got to be like 40, if not 45, but he dresses, talks, and acts like a 19-year-old in 1996. Creepy!

He tells us that the Resurrection of Jesus answers questions that literally everyone everywhere has wrestled with. Gosh, yes, he’s even wrestled with these questions himself! Yes, even him! Wow!

Oh, and before he dives into these supposedly universal questions, he tells people to check out Biola University’s apologetics programs. He works for Biola, but he doesn’t mention that fact here. He just says the videos are made in partnership with Biola.

(Incidentally, I recently audited Biola’s free apologetics sample lecture. They offered it as an enticement to get people to sign up for their full online course. I found it to be profoundly disappointing.)

To start with, Sean says:

If Jesus has risen from the grave, we have a positive answer to the question about the existence of God. You say ‘Well, how does the Resurrection of Jesus answer the existence of God?’ Well, think about it. Imagine we go walking outside and we come across my Ford Fusion, which is the car I happen to drive. And you see a huge dent in the front of it. And I turn to you and I say ‘What happened?’ You say ‘I saw the whole thing, but I couldn’t stop it.’ I say ‘Explain it to me!’ And you say ‘I saw this feather floating down from the sky. It hit the front of your car and totally dented it.’

Now of course you wouldn’t say that, and if you happened to say such a crazy thing I wouldn’t believe you. Why? Because a dent that significant requires a sufficient cause, and a feather is not sufficient. Now think about it. If 2000 years ago, before modern advancement and technology and medical advances that we have, Jesus actually said ‘I’m going to die, and I’m going to be buried, and in 3 days I’m coming back, conquering the grave,’ this points toward a powerful explanation. A supernatural explanation, with power over life and death.

(I wish evangelicals would quit making bad comparisons. They seem to be competing to find out who can make the worst ones.)

For no real reason at all, Sean then runs through four totally unrelated apologetics arguments.

Sean very clearly — and mistakenly — believes these arguments have merit:

Egad, I’m cringing so hard. It’s funny when apologists — with no scientific background at all — try to misuse science, but Sean just irks me more than most of them. He says of these oft-refuted bad arguments:

Those are good arguments. But if Jesus has risen from the dead, that alone tells us that this is a supernatural, theistic world we live in and that the god Jesus believed in [weird darting eye movement to his right] actually exists.

Did you notice that “but” in there? That’s a negation. Yes yes, those other arguments are nice and all, but here’s this big shiny new hotness!

OMG. Y’all, I seriously think Sean’s trying to position his childishly-bad “sufficient cause” notion alongside those big grandaddies of apologetics arguments!

My sides! I want to pat all five arguments on their heads and tell them they’re all completely lackluster so they can stop fighting over who gets the L-shaped tiara.

I probably won’t fully type out Sean’s second and third arguments, but I wanted to do that for this one.

Mainly, I wanted you to see for yourself how absolutely incoherent and pants-on-head ridiculous apologetics and apologists can get.

In this first argument, Sean makes ludicrously bad analogies and comparisons and makes tons of assertions he by no means can support. Heck, he doesn’t even bother trying to support anything he asserts.

Finally, he leaps to a conclusion that comes completely out of nowhere and is not supported by a single thing he’s asserted up to that point.

The most important thing to know about this first argument is that Sean takes for granted that the Bible’s stories actually happened. His audience certainly will do the same, so he probably feels he’s on safe ground here.

However, we don’t know that anything in the Gospels happened. Sean sure doesn’t know that. No evangelicals know that. They think it’s true and hope it’s true, yes. But nobody’s ever shown credible support for this notion. All we’ve actually found are nonstop contradictions to those myths.

In essence, the Bible contains a great many claims about reality.

It cannot, then, also be used as support for any of those claims.

In similar fashion, Harry Potter books cannot prove that Hogwarts is real. If a Harry Potter fan becomes certain that magic is real and Hogwarts exists, they need outside sources to corroborate those books.

Christians must look to outside sources to corroborate the Bible’s stories. And there just aren’t any, which is why Sean uses apologetics arguments instead.

Luckily, his daddy spent years coaching evangelical sheep to accept arguments in lieu of evidence. If the sheep knew that arguments are not in fact evidence, Sean would be out of a job!

A Whole Train of Fail.

Even if we ignore that whole circular-reasoning problem, though, Sean’s argument disintegrates. Let me paraphrase Sean’s attempt at logic here:

Given how short the video is, Sean McDowell came up with a veritable Gish Gallop of nonsense. (Oh hey, Duane Gish shows up in Summit’s course materials!) Sean throws out a number of erroneous and baseless assertions, makes comparisons that make no sense whatsoever, and then throws in a few “and therefore JESUS!”-es at the end as he declares the matter resolved.

To take any of Sean’s ideas seriously, one must:

Alas, millions of evangelicals fit into that whole list and will take this guff seriously. They’ll come out of his video convinced that why yes, Sean McDowell totally determined that Jesus exists.

But he did nothing of the sort.

So this was a flagship effort from a Biola professor of apologetics, y’all!

He’s the new generation of apologist, the hope of the next generation, the guy who’ll somehow reach dese keeds and make them all fundagelical again!

Everyone give him a big hand! Evangelical kids will be just fine, thanks to him!

Gosh, I wonder if his 2nd and 3rd big questions/answers get any better? Cuz I’m not sure even the most optimistic heart could think so.

NEXT UP: Chat day! Then: we continue our examination of Sean McDowell’s apologetics attempts. See you soon!