Not long ago, I talked about speaking in tongues at a post-deconversion company Christmas party. Today, I want to show you something I experienced as a bright-eyed, bushy-tailed Pentecostal lass. I didn’t know it yet, but I was well on my way to deconversion. See, I took my religion’s claims seriously. In other words, I expected our claims to stand up to the same basic testing and investigation that any other claim would get. WOW, did that attitude not go over well! So today, Lord Snow Presides over how I got (gently) smacked down for daring to suggest a formal test of one of my church’s biggest miracle claims.

Back around 1986, when I was about 16 years old, I converted to the United Pentecostal Church International (UPCI). Very shortly afterward, I heard about a gin-you-wine miracle involving speaking in tongues.

See, one of the members of the church was a pretty little girl. She was then about 8 years old. Just a few years previously, an unnamed Hebrew scholar of some kind had visited our church–our church, this very church I had joined! And he’d heard this child (then 4-ish) speaking in tongues. He had, the story goes, professed complete astonishment: she spoke in clear, understandable, perfect Aramaic!

Remember I mentioned how most speaking in tongues sounds like whatever a monoglot American thinks ancient Semitic languages sounded like? Most people who speak in tongues come out sounding like babies babbling in something like Arabic or Hebrew or something.

But this little girl had been caught speaking the real deal by someone who actually knew that language!

A Claim! A Most Testable Claim!

I was only a high-school kid at the time, but you just have no idea how excited I was about this claim. Someone told me about it one day right after a Sunday Service.

To my understanding, this story sounded very much like a claim that we could test. Imagine what the world would think about this completely impossible story being true!

Outsiders looked askance at speaking in tongues–I knew that, of course. They said Pentecostals sounded like they were babbling nonsense. And yes, I had to admit it did sound like babbling.

But this little girl could prove all of it was real!

Man, I was just so excited. I didn’t yet know why it was that Christians don’t ever seriously test any of their claims. I still thought that a prayer circle could end ALL CANCER, FOREVER, EVERYWHERE, especially if “two or three gather together in [Jesus’] name.” All that held us back from proving our claims beyond any shadow of doubt was the gumption to go out and do it.

And it just seemed so totally weird to me that nobody seemed to have thought of performing a super-simple test of something that should have been beyond-easy to demonstrate as real.

That little girl still attended my church, and she still spoke in tongues (she and her mom Bebo and her aunt Marf were friends of mine from way back). Moreover, she still sounded like she was speaking the same language that she always had. We could totally let linguists record some of her worship and find out if it was actually Aramaic!

In addition, we could go find that visiting Hebrew scholar! Whoever had invited him was probably still around somewhere. We had a serious boner for (what we imagined was) Judaism. A Hebrew scholar, then, had some serious Pentecostal street cred. I couldn’t imagine my entire church’s membership simply forgetting who he was or who’d invited him, even four years ago.

So we could find this guy, and we could ask him to testify about what he’d heard that day. And we could record the little girl, and prove that the scholar had been right. And then, and then, and then we could sit back and wait for the world to wonder and marvel at how a little girl could possibly have known an ancient language so fluently at her age.

To me, this plan sounded foolproof.

Setting Off to the Pastor!

So right then and there, I trotted right up to the altar, which is where I knew I’d find the pastor. As always after church services, a line of people awaited his attention. I took up a place at the back of it.

This pastor was a very genial old fellow with a folksy demeanor and an aw-shucks Jesus Smile. He’d helped to build that entire denomination up from nothing. Consequently, his church, though not huge, functioned very much as a flagship for the entire UPCI. He died not long ago, but people still speak glowingly of him. Even at the time, his church all but worshiped him.

Once I’d reached the front of the line, I chirped at him my grand idea:

“Let’s totally get some linguists into this church to record people speaking in tongues like that little girl! Let’s show everybody that tongues are real languages!”

You and I both know how this conversation went, right?

Christian leaders like him have been around long enough to know that conversion doesn’t really change anybody, that Christians aren’t really better people than anybody else, that miracles must be seen from a certain point of view to look compelling, that prayers don’t really bring about miracles, and that anybody foolish enough to name exact (and close-by) dates for a prophecy is going to feel mighty embarrassed when that date comes and goes without that prophecy being fulfilled. Their gravy train depends on maintaining a whole series of fictions about all of this stuff.

He never even stopping smiling as he shot down my idea. I’m sure I wasn’t the first bright-eyed young Christian to bounce up to him with a grand plan like that.

He replied something like this: Aw, shucks, people in the world already have all the proof they need. We don’t need to “prove” our claims. Instead, we need to witness to the world about what they need to do to get saved.

As smackdowns go, it was fairly gentle–but also unmistakable. He’d simultaneously refused and made me feel like I’d seriously erred in even thinking of testing anything in the religion!

I smiled and nodded as expected and relinquished my coveted front position to someone else. As I walked away, though, I seethed and entertained furtive thoughts of getting linguists into the church anyway. However, I never did it. The pastor had sent a message to me that I’d understood quite well. Nobody was allowed to subject Christian claims to any kind of real-world testing.

From a Certain Point of View.

Little did I know that years later, a dramatic new website service would change everything.

Before YouTube, if people wanted to hear tongues for themselves, they pretty much had to physically walk into a tongues-talkin’ church while its members were in a rowdy mood. Now anybody who wants to can pull up thousands of videos of people speaking in tongues. 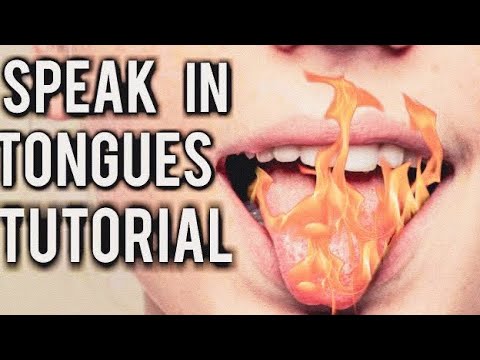 I wonder what would have happened if I’d found this tutorial, made by what appears to be an ex-Christian, as a teen.

Many hours of YouTube footage of speaking in tongues has been created and released by Christians. Some of these videos criticize the practice. But most simply want to display it–with great pride!

I wonder if that’s why so many Christians’ understanding of speaking in tongues has shifted over time. Back in my day, I didn’t know a single Christian who practiced it who didn’t think it was a real divine language. It might be a dead language, or one that linguists had never identified, but my old tribe always considered their babbling to be real languages. Urban legends abounded of people who recognized this or that language overheard in a tongues-talkin’ church–like the mystery Hebrew scholar and Bebo’s daughter. In the years to follow, I heard a dozen riffs on that urban legend trope.

Now, though, I’m far more likely to hear a tongues-talkin’ Christian insist that their babbling represents a spiritual language divinely downloaded into their minds so their spirit/soul can communicate directly with their god. They openly admit that they aren’t speaking in real human languages. I almost never hear one of them saying anything else.

Some Christians object mightily to this conceptualization of Christian babbling, but they don’t make much headway against the opened floodgates.

The way I see the matter, it sure looks like Christians, faced with the sudden and imminent unmasking of their glossolalia as nothing but made-up babbling, decided simply to move the goalposts over a bit so their made-up babbling still qualified as a real live ZOMG MEERKUL demonstrating their god’s grace and power to all humankind.

Hm. So I reckon that in other words, Lord Snow Presides over literally all of the miracle claims.

NEXT UP: Some leaders over at the Southern Baptist Convention aren’t just telling porkie pies about their denomination’s decline. They’re telling super-outdated porkie pies. Join me tomorrow for a look at some of them–as we test their claims.