Hi and welcome back! For a change, I’ve actually remembered that today is Monday — which means it’s time for Lord Snow Presides (LSP)! This installment represents a very special treat for us, too, as we turn our focus to Frank Peretti’s 1986 cringe-inducer, This Present Darkness. In this installment, we witness a super-dramatic rescue! Moreover, it’s one that could have come straight out of  the Bible itself: angels swoop in to aid Susan Jacobson, a character in mortal peril.  Today, Lord Snow Presides over reminders nobody needed that nothing divine rescues anybody in the real world.

(Please click here to find the master list of previous This Present Darkness discussions. Also, any page numbers cited come from the 2003 paperback edition of the book. Quotes come from the book or other noted sources, unless I let you know otherwise.)

Susan Jacobson — aka “the Handmaiden,” because TRUE CHRISTIANS™ never ever adopt goofy, histrionic, overblown titles for themselves and their sycophants — works for Alexander Kaseph. Kaseph, in turn, leads the Cabal of Satanic Wiccans (or Wiccan Satanists, Whatevs) (CSWWSW). For most of the book, she’s been trying to escape him and the Cabal through methods one can most charitably describe as ineffectual and hilariously drawn-out. And alas and alack! At last, Kaseph’s cottoned to her treachery and she’s been caught.

But the angels hear her desperate prayers! They’re already outside plotting to rescue her. One of them creeps unseen into her prison room and unlocks her manacles. She escapes out a window while the guards there are left “smiling confidently at an empty chair!”

After a wild ride through a stolen van, Susan Jacobson achieves freedom. While angels fight demons the whole way, Kaseph’s security guards give chase. Between human and demonic interference, the van flies off a cliff and crashes far below.

Meanwhile, Kevin Weed gets slipped a mickey at the bar. While attempting to get home, he also crashes off a cliff.

I haven’t read far enough forward yet to know exactly how these two situations will shake out. Despite that, I just don’t find myself feeling super-duper-worried about these two characters, for some reason.

The Power of Prayer.

Chapter 29 begins with Susan Jacobson locked in literal shackles and chains and waiting in what’s left of Kaseph’s secretarial pool and mansion complex. She awaits Kaseph’s punishment for treachery. And while she waits, she prays super-duper-hard (p. 263):

Upstairs, sitting helplessly between the two guards, her feet and hands bound with manacles, Susan Jacobson waited and prayed. With all that was within her, she cried out to the one true God, the God whom she did not know but must be there, had to hear her, and was the only one who could help her now.

And because this is a fundagelical book written by a fundagelical to pander to fundagelical beliefs, her prayers pay off in spades. The Cabal decides to execute/sacrifice her, but when their high priest (who for some reason isn’t Kaseph himself) comes to fetch her, this is what he finds (p. 265):

The little priest reached Susan’s bedroom, and his bony hand opened the door.

“We are ready,” he declared, and suddenly realized that he was talking to a pair of very dedicated guards making very sure an empty chair would not get away.

The little pagan had a first-class fit; the guards had no explanation.

I gotta say: when Frank Peretti decides to borrow ideas from other sources, he goes big. This situation reminds me very much of something that happened in the Book of Acts:

Suddenly there was such a violent earthquake that the foundations of the prison were shaken. At once all the prison doors flew open, and everyone’s chains came loose.

Minus the earthquake, of course!

(I also think of Monty Python and the Holy Grail.) 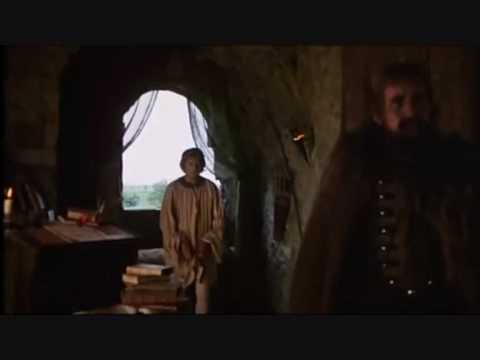 Still a better love story than This Present Darkness.

Lots of Christians think miracles happen every single day to millions of them. Every one of these miracles amounts to a perversion of the laws of physics, a refutation of cause-and-effect, a total disregard for the arrow of time. Little wonder Christians love imagining that the god of the entire universe has bent those rules for their own sake, simply because they asked for it to be done.

When we actually look at these totes-for-realsies “miracles,” though, we discover that they’re anything but miraculous. If anything, reality reveals them to be coincidences or misunderstandings of a situation at best — or the product of outright distortions or even lies at worst. And all of them unfortunately remind us of just how limited Christians’ imaginations truly are.

Or he could have stopped the entire Cabal from forming in the first place. Wouldn’t that really have pushed the thrill buttons of this story’s TRUE CHRISTIANS™?

All that sales-minded Christians have to say about the curiously-pedestrian nature of their totes-for-realsies miracles is blah blah something about gentlemen and free will, or my favorite excuse of all time: Christians don’t get nice things anymore because the Bible’s super-dramatic, obvious miracles were meant to fulfill a certain purpose, and that purpose was met and finished centuries ago, so neener neener on us and that’s why Christian miracles seem so minor and picayune and always have SO SHUT UP SHUT UP SHUT UP.

(Their god’s the same yesterday, today, and tomorrow — except for miracles, of course. And their conceptualization of marriage — that’s way less exchange-of-property now. And the food rules.)

In their fiction, though, they let their imaginations run wild. There, they can present whatever miracles they please under whatever circumstances they wish. And yet we still find their imaginations sadly wanting. In their very own stories, told to please their very own selves, they still can’t really imagine a world containing real actual miracles and a real actual omnimax god.

The best they can do is coming up with a world that looks much like the one we have now, just with a few extra coincidences and strange occurrences thrown in — and characters who are much more gullible than even they are in this real world we actually have now.

Today, Lord Snow Presides over a very strangely restrained totes-for-realsies miracle that only reminds us of how the Christian god can’t even manage that little detail in the real world.

NEXT UP: A quick look at the new cottage industry taking fundagelicalism by storm. Yep, some hucksters are figuring out ways to make money before the gravy train crashes for good. See you tomorrow! <3

Lord Snow Presides is our off-topic weekly chat series. Lord Snow presides over a suggested topic for the day, but feel free to chime in with anything on your mind. We especially welcome pet pictures! The series was named for Lord Snow, my sweet white cat. In life, he actually knew quite a bit.