Just as I was wrapping up my post yesterday evening, my state experienced a very strong earthquake. Immediately, fundagelicals leapt into action by declaring it a sign of the Endtimes. Today, let me show you a little bit about what this prediction involves, why fundagelicals keep making failed predictions like it, and what’s really going on here.

The Same Old Song and Dance.

Last night, a powerful earthquake shook Idaho and its neighboring states. I happen to live there, so we had a very long and scary minute over at Casa Cas! And chances are, we’ll have a few more this week! Yikes! 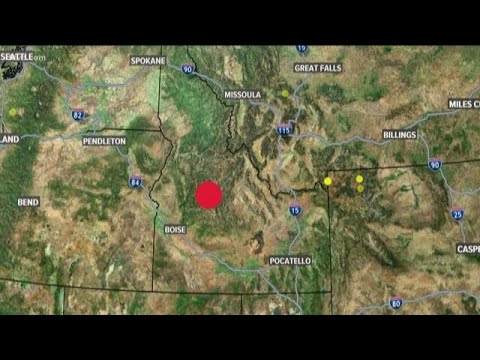 And predictably, fundagelicals swung into action — by declaring that OMG THIS IS THE ENDTIMES!!11!!ONE!!

One Christian declares that this earthquake represents part of “an alarming trend.” Another just lists off Bible verses and shoehorns world events into those verses. Commenters on this prepper blog post discuss it. Over on the subreddit r/TrueChristian, someone wrings their hands over “earthquakes happening more frequently in areas that rarely see them.” (He means Idaho, I’m guessing, since we don’t get a lot of earthquakes.)

And, of course, on all the news videos on YouTube, Christians rush to cite the Bible verse that titillates them so, Matthew 24:7:

For nation shall rise against nation, and kingdom against kingdom: and there shall be famines, and pestilences, and earthquakes, in divers places.

My goodness! It’s been a wild ride in Fundie-Land today!

Fundagelicals are wingnuts. They don’t subscribe to beliefs that cooperate with reality, so they don’t use reality-based critical thinking skills to assess claims based on their beliefs. Instead, they look to a large body of pseudoscience and apologetics that substitute for critical thinking and objective measurements, tests, and observations.

That’s why I was very pleasantly surprised to discover that none of the really big fundagelical sites want to go on record as disputing reality! Seriously! Here’s one:

The Institute for Creation [Non-]Research: Um, Actually… The Heathens Are Right.

A number of prophecy teachers say that a pronounced increase in frequency and intensity of earthquakes has occurred in the latter part of the twentieth century, a worldwide trend fulfilling a prophecy made by Jesus. Contrary to these prophecy teachers, no obvious trend is found indicating an abnormal increase in the frequency of large earthquakes during the last half of the twentieth century. [. . .]

It is ironic that a passage that intentionally teaches that earthquakes are not indicators of the “end of the age” should be so frequently interpreted as teaching exactly the opposite.

You could have knocked me over with a feather, right about here!

Other fundagelical wingnuts don’t allow reality to rain on their Jesus parades.

Nevertheless, earthquakes will someday increase substantially, because heat is building up inside the Earth and the shrinkage of rock that melts below the crossover depth increases stresses in the crust and upper mantle.

[That claim is not true. It seems likely that the writer of it got very confused reading real science.]

That’s more or less how I heard it explained as a young fundagelical lass myself. Along with that claim, I heard another common fundagelical chestnut about how the length of the day was increasing, ZOMG! And I also heard the one about “Joshua’s Missing Day.”

It really says something when fundagelicals charge off like rockets with wild claims and even their own leaders can’t rein them in!

Why Fundagelicals Want Lots of Earthquakes.

We’ll talk soon about Endtimes conspiracy theories, because they are amazing. For now, I’ll just leave the matter at this:

Fundagelicals think that lots of earthquakes, wars, and other troubles indicate that Jesus is coming back super-soon.

A sizeable number of fundagelicals spend a whole lot of time keeping track of all these world events. They think they can use these data points to generate a good, educated guess about when the Rapture and/or Tribulation will finally arrive.

In a very real way, when Christians breathlessly cite Matthew 24:7 in a comment section they’re reminding themselves of the fear and dread that titillates them so much.

Recent devastating earthquakes in Haiti, Chile and China, as well as magnitude 7 plus earthquakes in Indonesia and California, might give the impression that earthquake activity is increasing. In fact, a quick look at earthquake statistics over the last twenty years shows that this is not the case.

Large earthquakes greater than 8.0 in magnitude have struck the Earth at a record high rate since 2004 but scientists have analyzed the historical record and found that the increase in seismic activity was likely due to mere chance.

Records from the past century reveal some periods that have seen an unusual number of giant earthquakes, defined as those with magnitude 8.0 or higher. For example, global seismic data show a dramatic spike in the rate of large earthquakes from 1950-67. But there have also been quiet periods with fewer large quakes.

Not one reputable science site contains anything different.

That Ocean Networks Canada link comes to fundagelicals’ rescue with some information about why they might feel like earthquakes are increasing in number. In that link, the writer discusses a couple of cognitive quirks in human minds.

The first of those quirks is the spotlight fallacy. When a lot of attention gets focused on an ongoing event, people believe it happens more often than it does. In the case of earthquakes, modern media makes it possible to engorge ourselves on news on a single topic if we wish. So yes, it’s very easy to believe there are lots more earthquakes — because we’re hearing about earthquakes more often than we used to.

The second of those quirks — and something Christians might do well to learn about for their own good — involves the clustering illusion. We really want to find meaning in unrelated clusters of information. We want to group them up and find a big picture. But sometimes there’s just not one.

Other biases help explain fundagelicals’ reaction to yesterday’s earthquake, too:

Here’s an excellent cheat sheet for cognitive biases — you can probably even find others that explain what’s going on here. But my list seems like a good start. (That’s probably my own confirmation bias speaking.)

Fundagelicals love to imagine that there’s this growing crescendo of events leading to the end of the world. They love thinking they know stuff nobody else knows. It’s one reason they tend to accumulate conspiracy theories so easily and readily (and why, if you run into a fundagelical who buys into one of them, chances are that fundagelical buys into all of them).

In a weird way, fundagelicals even love it when people tell them they’re wingnuts for believing all those conspiracy theories. There’s always been a strong desire in that tribe to screech I TOLD YOU SO to naysayers. Many live in hope that they’ll get that opportunity one day.

As broken promises within Christianity go, this one might be one of the very oldest. Heck, it’s even in the Gospels (a mere couple dozen verses away from that beloved earthquakes verse)! However, that’s never stopped wingnuts from glomming onto it — and, of course, seeking attention by holding it up.

When their predictions fail utterly to come true, they slither back under their rocks. There, they find new dates, shoehorn more world events into the same ol’ Bible verses, and craft a new sales pitch.

We’re In This Thing Together.

It saddens me more than I can say to see how quickly and joyously fundagelicals cut themselves off from the glorious commonality of the human experience.

I wish I had a way to tell them they’re wrong and how they’re missing out, how they’re wasting the one life we know for sure we’re going to get.

But if they could accept feedback, they wouldn’t have become wingnuts in the first place.

So yes, they’ll see this Idaho earthquake as a sign of the Endtimes — just like fundagelicals have seen all world events since well before I myself was one of them. When the world fails to end, they’ll forget they ever thought that as they leap to the next set of predictions.

NEXT UP: Atrocity apologetics is on the rise — and we’re going to call it out. See you tomorrow!