Hi and welcome back! This week, NASA landed the Perseverance rover on Mars. We got some stellar pictures and videos of the rover’s equipment in action, and of course we saw (and heard) the Martian surface itself. And something has had me smiling all day today: the shake in the voice of the NASA announcer who narrated the landing. That shake speaks to the human condition like almost nothing else could, and in the doing it destroys so many claims made by Christians. Today, Lord Snow Presides over the glories of reality, and how that is more than enough for growing numbers of us.

Perseverance, or “Percy,” is a large rover that NASA just sent to Mars. They launched it last July and it’s taken all this time to get there. It arrived at Mars around February 18th, at which time it landed in the Jezero Crater. Now, its “science phase” has begun. It will travel all around the surface of Mars, hitting a number of locations that NASA wants photographed, and it’ll take samples of all kinds of stuff. Also of interest, it’ll be testing oxygen production on Mars — possibly helping us visit there in the future.

For the Kerbal Space Program enthusiasts among us, NASA has put all kinds of official stuff up on their website that looks like it could have come straight out of that game. It is absolutely amazing stuff.

And today, Science News put the landing footage on their YouTube channel: 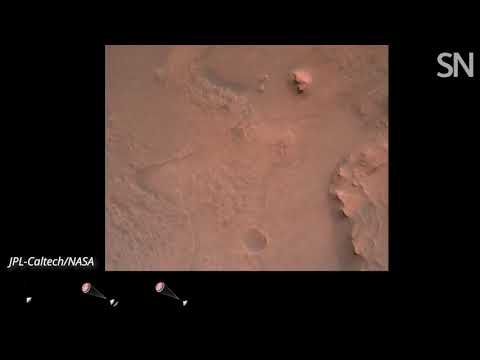 It’s amazing. As the rover begins its descent, a female speaker tells us what’s happening. She begins with describing the “Straight Up and Fly Right Maneuver.” The minutes pass, and I can easily imagine her holding her breath as everything starts to come together. Then, at 3:10, she declares:

Touchdown confirmed. Perseverance safely on the surface of Mars. . .

And her voice shakes so hard on the word “safely.” As the camera pans to the joyous techs at NASA, she regains control of her voice again and moves on.

I can absolutely understand why her voice shook, too. Just thinking about her exultation and the reasons for it brings tears to my own eyes.

How Is Something This Amazing Not Enough?

And then, I think about what’s going on in Christianity lately:

The new sex scandals caused by the total lack of gods giving a wild wet’n’ happy slap about what predators do.

The new attacks Christians are making on human rights — and on each other for not supporting those attacks.

And of course, the new infighting among themselves as they squabble over shrinking funds, membership, and credibility.

It’s so picayune. So banal. So very, very small compared to the glories of both the human condition and our universe.

Everything modern Christians have ever done doesn’t even rise to the level of consolation prize for missing out on all the real stuff happening around us.

Too Much to Hold.

When I think about it all, I find myself echoing Schmendrick in The Last Unicorn as he claims his magic at last:

This time, there was too much of it for him to hold: it spilled through his skin, sprang from his fingers and toes, welled up equally in his eyes and his hair and the hollows of his shoulders.

There was too much to hold, too much ever to use; and still he found himself weeping with the pain of his impossible greed.

He thought, or said, or sang, I did not know that I was so empty, to be so full.

The wonder we find in our universe is its own kind of magic. It is too much to hold. It spills out through our skin, springs from our fingers and toes, wells up in our eyes and hair and yes, from the hollows of our shoulders. We’ll never plow through all of it. Every question we answer only sprouts a hundred more questions.

And yet we only want more of it.

Here’s the kicker: we’ll find it too — just not in religion.

I don’t even mean that we’ll only find that wonder in exploring the outer edges of science — in seeking the future. Obviously, there’s great value in learning about the past — in finding real answers.

It’s just that neither of these can happen within the framework of religion.

In religion, people can only argue about that-which-they imagine-was. They endlessly bicker about what this Bible verse means or how far to take that long-dead scholar’s words, or exactly how to persecute their tribal enemies. There’s nothing new to discover because there’s nothing real there in the first place. All they’ll find is a very sterilized, compartmentalized view of a particular fictionalized version of the past.

They’re like kids arguing about a comic-book hero. Any time they get close to real truth, objective facts-based truth, it only serves to destroy their religious claims about the truth.

The rest of us have less and less time for this nonsense. To quote the 7th-grader who named the Perseverance rover, Alexander Mather:

We as humans evolved as creatures who could learn to adapt to any situation, no matter how harsh. We are a species of explorers, and we will meet many setbacks on the way to Mars. However, we can persevere.

Today, Lord Snow Presides over the perseverance of humans and how it led us to an astonishing new world to explore — and to the shake in the voice of the announcer realizing it was really about to happen at last.

NEXT UP: Speaking of shrinking funds, LifeWay is already looking to sell its fancy new headquarters building. We’ll check out what’s going on lately with them tomorrow. See you then!