Hi and welcome back! Lately, biologists have discovered some interesting adaptations in snail life that show us that life — in the cosmic, general sense — often really does find a way. Today, Lord Snow Presides over yet another slap in the face to Creationists.

Snails belong to the general classification of invertebrate animals, meaning they lack backbones or internal skeletons. They began their existence on Earth near the beginning of the Cambrian period, about 550 million years ago (Mya; there’s also Bya for billions of years ago). Around 350 Mya, these first sea gastropods eventually wandered onto land, becoming Earth’s first land snails.

It looks like snails can adapt extremely quickly to new and radically-different conditions, which might explain why scientists are so interested in studying them. I found all kinds of lists of weird, fantastical, and downright dangerous snails online.

Snails might not be the most numerous invertebrates (by numbers or species), but they have evolved some truly breathtaking forms and abilities.

Everyone, Meet Our Guest Snails.

Earlier, Melody commented about a story about snails that’s had me thinking. And it turns out that snails have been on biologists’ minds lately, too! So today, I wanted to focus on these remarkable snails. Most of us already know this truth, but these creatures amply demonstrate that life, uh, finds a way — without any gods at all to help or hinder them.

So everyone, meet the scaly-foot snail. It is METAL AS F&#*! It is an iron-black snail with a metallic shell and foot. That’s the part that protrudes below the snail’s shell and how the creature gets around. The soft part of its body is a deep, bloody, glossy red. Seriously, this thing looks like it belongs in a goth kid’s Warhammer army. Those shells contain actual iron, by the way. And it is those shells that allow the scaly-foot snail to survive in one of the most inhospitable environments on Earth.

The scaly-foot snail normally lives in the Indian Ocean — from 1.5 miles to 1.7 miles (2400-2700m) under its surface. That’s really deep. Here’s a large poster of deep-sea life. You start seeing some truly weird creatures once you get down that deep. And these little guys not only live in those extreme pressures, but near extremely hot volcanic vents that can reach 750F (398C). So obviously, scientists want to know how they do it.

For this latest experiment, biologists gathered 20 scaly-foot snails from 1.8 miles (2900m) down. They only wanted the most hardcore scaly-foot snails of them all, I guess. And they discovered that this snail has a gene that vastly increases its tolerance to all the iron ions in their environment. They can convert that iron into iron sulfides in their armor. Just wow.

The Miss Congeniality Award goes to this sea slug. It can literally regrow an entire body with just its own severed head. They’re not snails at all, of course. Still, they’re astonishing. Holy cow. They’re like Deadpool. Little green Deadpools.

In the 1993 movie Jurassic Park, Jeff Goldblum plays the world-famous mathematician Ian Malcolm. Though Malcolm has little experience in biology, his work in “Chaos Theory” has earned him a seat at the safety inspection of rich entrepreneur John Hammond’s new dinosaur park.

Chaos Theory was a trendy idea for us non-scientists and fundagelicals in the 1990s (exactly as “the multiverse” became for Creationists in the 00s). So yes, absolutely, audiences full of people like us all nodded right along to Malcolm’s explanation in the movie about how “Chaos Theory” could tip an event one way or another along lines that mathematicians could predict. 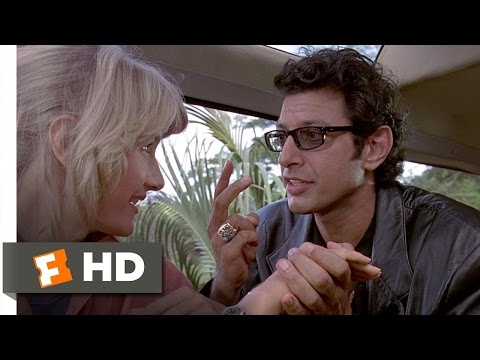 In the scene above, Malcolm explains his ideas to mack on paleobotanist Ellie Sattler, the woobie of paleontologist Alan Grant who is sitting right next to him. But it was a good scene all the same for establishing any number of important little subplots and character relationships — and giving us a hint about the future plot of the movie.

It is the non-biologist in the party who also voices the movie’s most central idea. Malcolm protests vehemently to Hammond’s pet scientists, who are telling the inspectors with pride about how they prevent the births of any male dinosaurs:

Dr. Ian Malcolm: John, the kind of control you’re attempting simply is… it’s not possible. If there is one thing the history of evolution has taught us it’s that life will not be contained. Life breaks free, it expands to new territories and crashes through barriers, painfully, maybe even dangerously, but, uh… well, there it is.
John Hammond: [sardonically] There it is.
Henry Wu: You’re implying that a group composed entirely of female animals will… breed?
Dr. Ian Malcolm: No. I’m, I’m simply saying that life, uh… finds a way.

Later on, the inspectors discover dinosaur egg shells. These shells indicate that why yes indeed, somehow these dinosaurs who were all female at birth have successfully bred. At that point, it is a clearly-resentful Alan Grant who has to concede that Malcolm was right: life had, indeed, found a way.

And it had found that way quickly.

Evolution: The Snails in the Ointment.

In the real world, adaptation can happen very quickly relatively speaking. It’s not normally a weekend event. But still, life finds a way.

This entire process of evolution, meaning descent with modification, has always flummoxed Creationists. Their entire worldview rests on a very particular –and may I say quite childish — misinterpretation of the myths contained in the Old Testament. The black-and-white, all-or-nothing mentality of authoritarians cannot handle nuances, metaphorical or poetical language, or a Bible that contains, at best, the history and religious ideology of various cultures that evolved into unrecognizability eons ago.

As well, Creationists draw from this cherished misinterpretation a sense of entitlement over literally everything. Creationism grants adherents what they perceive as a permission slip to seize control over other people’s lives.

Without Creationism, these Christians’ entire culture and self-image would need to change. And they would certainly have way less standing to wage their culture wars and make the various apocalyptic threats that are their stock in trade.

And yet reality contradicts their beliefs at every turn.

A Quiet War That Snails Win — Hands, er, Feet Down.

Every time a cool new discovery gets made, Creationist leaders must find a way to hand-wave away the excitement of scientists and dim the glorious wonder of the universe.

That excitement is infectious and can be communicated in real-world ways to produce real-world results every single time. And that wonder is so much bigger than their provincial little godling and his compartmentalized, confusing world could ever be. This news about snails invokes some serious wonder, and it also stomps all over the myths of Creationism — especially regarding Creationists’ beloved myth of the Great Flood.

After all, how could Noah have gotten these snails onto the Ark? And how would he have gotten them set by their vents in the Indian Ocean after the Flood, over a mile under the water? Just chuck ’em down and hope for the best? It’s purely comical to imagine.

For that matter, it’s hard to imagine why any gods would have deliberately crafted life to fit into this shockingly hostile environment. What purpose would they even serve there? And why make them go through what must be very painful lives?

These aren’t questions Creationists have ever been able to answer.

Keeping Creationist Beliefs on the Down-Low.

For a while now, these Christians have kept their very wackadoodle set of beliefs on the down-low. However, their attack plan involves destroying America’s publicly-funded, taxpayer-supported educational system from the inside. I think now is a good time to remind everyone that the people waging that war tend overwhelmingly to be Creationists, and that these culture warriors draw their mandate from exactly these beliefs.

So I’ll always, always take every opportunity I can to point out that these beliefs are no more based in objective, real-world truth than any other Christian belief ever was.

Today, Lord Snow Presides over a belief system that can’t withstand the truths revealed by a bunch of lowly-seeming snails.

NEXT UP: A lot of fundagelical TRUE CHRISTIANS™ have a serious hate-boner for megachurches. And indeed, this time around with Brian Houston they’re full of accusations along those lines. But they’re dead wrong. The megachurch structure itself had nothing to do with Brian Houston’s failings. And we’ll talk about that tomorrow.

(PS: After we’re done talking about megachurches, I plan to take up Tim Keller’s cringe-inducing and dishonest post about death. But I really want to keep the megachurch stuff together for now.)