Evangelism-minded Christians sure love their zingers! Last time we met up, we looked at Lydia McGrew’s attempt at one. She wrote an essay that tried to be a sort of Argument from Jesus’ Resurrection Totally Happened So Therefore Christianity Itself Is Totally True. Among its many flaws, her attempt at a Christian zinger revealed a huge shortcoming in Christians’ thinking. I’ll show you what that shortcoming is–and why it’s such a dealbreaker.

Some years ago, Dr. Nerdlove invented the term oneitis to explain why so many nerds suffer crushes that they just can’t shake. Oneitis, he taught, is “a crush gone out of control and turned into something that’s a borderline obsession.” The hapless nerd in question becomes completely fixated on this one person, even refusing opportunities to find love elsewhere. This crush is their One True Pairing (OTP); no other person could ever fulfill that role.1

Christians who admire confrontational styles of evangelism, similarly, have a lot of trouble understanding criticisms of the technique. Indeed, these sorts of Christians often suffer a oneitis of their own. Most of them have a little pet apologetics argument that they think is the One True Argument to Slay Disbelief and Doubt.

This pet argument will inevitably be whatever they personally find the most compelling; in their narcissism, they assume that everybody else in the world will find it similarly overwhelming.2

Things get comical when they try to use their favorite argument as a zinger.

Skipping Steps in Favor of Zingers.

You’ll soon be able to recognize Christian who suffer from Apologetics Oneitis.

Often they are totally convinced that if they could only make their sales marks understand this one argument, whatever it is, then they’d totally win those souls for Unca Jebus.

Sometimes this one argument is Creationism. In that case, the Christian in question will seek out non-Christians who understand science and argue Creationism at them. That might not even be the main reason for the non-Christian to reject Christianity, but the zinger-flinger will pester at this one topic as if someone’s conversion totally hinges upon it.

The hilarious part? I’ve never even seen one of these sorts of Christians ask their sales prospects about that main reason before launching into their routine.

Lydia McGrew clearly believes that one reason for her religion to be rejected is that non-Christians don’t see how Jesus Christ could possibly have been resurrected. Hence, her paper focuses on this one miracle claim. In reality, however, she’s got a whole lot of steps to establish before she can go near the Resurrection. Instead of establishing those steps, she just states outright that the Gospels are reliable histories–and she just goes from there.

In her entire list of essays, I didn’t see a single one that actually tackled them, either.

The Christians who like zingers also tend to argue apologetics like they’re a star lawyer in the middle a courtroom during the trial of the century. They have a certain cattle-chute-like series of questions they like to ask, and they expect answers to follow along a very certain avenue. If they can get their prey to play along, then the series of questions ends with a J’ACCUSE! finger-pointing style that, ideally, will provoke a heartbroken confession.

If you remember God’s Not Dead, that movie’s creators certainly bought into this exact debate style. 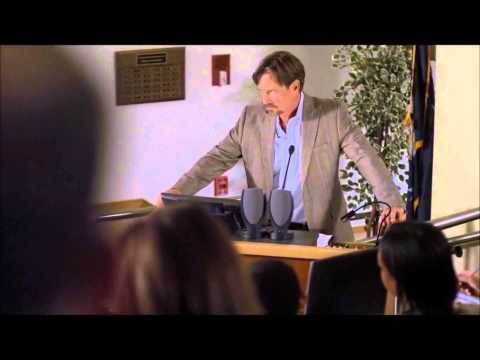 In this pivotal scene, the student Josh Wheaton completely sidelines a debate about the existence of his god to focus on why his professor seems so hostile toward Christianity. He needles the professor until finally he gets his big courtroom moment: Radisson explodes into a brief monologue:

Yes, I hate God! All I have for him is hate.

Now, Josh already knows that Professor Radisson hates his god. The movie already showed us a scene in which Radisson talked about his mother’s death and the futility of prayer. The other students clearly take Josh’s questioning as some kind of Word of Wisdom, but it isn’t.

The movie’s Christian viewers love this scene for a reason. It is everything they ache to see in confrontation-based evangelism.

Aww, That Was His Surrenderin’ Arm.

After the zinger lands home, prospects are supposed to drop to their knees and start babbling the Sinner’s Prayer. At the very least, they’re supposed to come away troubled by this sudden realization of Christianity’s utter truth. In that movie clip I just showed you, immediately after Radisson explodes in hatred, the movie cuts to a close-up of the Chinese atheist character. He is very deeply concerned.

The Chinese atheist converts, incidentally. Radisson himself converts in his final moments after being fatally struck by a car.

And gang, either fantasy outcome is fine to the kinds of Christians who love movies like this.

In reality, however, this approach alienates people. I realize that the Christians at that Cross Examined site think otherwise, but they make their living from people buying the resources they sell that are based upon this approach.

It literally doesn’t matter to them if Christians successfully evangelize as long as they keep buying these resources. They’ve already made their sale.

The Pool of Faith.

Zingers fail as a tactic for many reasons.

Mainly, zingers fail because people generally have a large pool of reasons for believing or disbelieving things. In reality, a real Radisson would have a lot of reasons for rejecting Christianity. Some people do get angry about the religion’s promises turning out to be untrue; they just usually use that anger to propel a deeper investigation into why the promises didn’t work out. Or they might end up angry at the Christians who peddle Christianity on the basis of these promises.

In similar fashion, people need reasons to believe in anything. Once we have enough reasons, we’ll believe whether we like it or not. We won’t be able to help ourselves.

Christians just don’t have a lot of actual reasons to offer.

That’s why they use zingers in the first place.

The Argument from Miracles.

Lydia McGrew’s attempt at a zinger suffers from the same shortcomings as any other Argument from X. Her essay tries to make the case that Jesus Christ’s resurrection really happened, and so therefore her religion’s other supernatural claims simply must also be true.

But none of that follows.

She never gets around to giving us a good reason to think that anything in the Gospels really happened, much less any of its claimed miracles. Her essay boils down to this: Christians really, really need a Resurrection to have happened, so it must have. The Bible’s claims about the Resurrection become true simply because it’s in the Bible, which she states at the beginning of her essay as her working presupposition.

Once she “establishes” that the Resurrection totally happened, McGrew can move on to saying that if that happened then obviously Christianity itself is based upon reality. Its claims become true; everyone needs to get busy.

In reality, though, one miracle claim does not a belief system create.

But she probably won’t ever understand why she must focus on those things.

See, Christians claim miracles happen every single day. Chances are that literally millions of Christians–maybe even billions–think a miracle has totally happened to them. Depending on how they define a miracle, most of these claims will be small: car keys found, parking spaces sighted, a test passed. Some will be much larger, but similarly perfectly natural.

Lydia McGrew doesn’t focus on those miracles, however, despite how much easier it’d be to gather information about them.

Instead, she focuses on a supposed miracle that occurred literally thousands of years ago.

I guess it’s much easier to PROVE YES PROVE something that happened way before camera-phones existed.

In reality, once the zinger is delivered–if it can be delivered at all–chances are the prospects will know that something’s been put over on them. They’ll roll their eyes, say Whatever, dude, and walk away. They might not know exactly what debate trick just got played on them, but they’ll know a trick was played.

The bigger problem for confrontational evangelists is meeting up with people who actually know what their tricks are. That’s why we’ve been talking about this tactic for so long. Forewarned is forearmed, as they say!

The biggest problem at all for these would-be evangelists, though, is that even if they could credibly demonstrate a single one of their claims, that still leaves a whole lot of claims left unanswered.

Often an evangelist will assume that if they can make a non-believer buy into their One True Argument, then that person will simply assume (as the evangelist does) that this one argument’s success means that everything else is true as well. But that’s not how it works.

If this one miracle actually could become something we can’t possibly explain, that still leaves a whole can of wriggling juicy worms that the evangelist can’t possibly deal with–both about miracles themselves and everything else that’s wrong with the religion.

For that matter, one miracle’s really much like another. A Christian makes a claim about something they’ve heard about or seen or experienced that is hugely unlikely. They claim that supernatural aid made it happen. They expect us to buy into the claim based on their say-so.

Occasionally they mix it up by ponying up support for the claim; I’ve never once seen any attempts that rose to the level of providing credible evidence for it. Either way, then they get mad at us for rejecting the claim.

The only way that a Resurrection miracle claim differs from a modern one is the time-period involved. It’s a lot easier to reject a modern miracle claim because the claimant simply has so many ways of credibly verifying the claim and we can easily tell that none of those methods are in use here. We have comparably fewer ways to verify a claim set in ancient times.

A long time ago, even while I was still Christian, I realized this simple truth: my peers focused on those ancient miracles exactly because it was easier for us that way.

In the same way, it’s easier to practice a style of evangelism based upon confrontation and zingers. A zinger gives the person using it that satisfying sense of having put one over on the other person. It provides the glow of superiority and victory that Christians sorely lack in today’s world. Without zingers, they’d never get to do their victory dance.

Sure, this tactic doesn’t result in actual conversions in practical use. But wow, does it ever makes sales with Christians who already believe.

NEXT WEEK: We’re circling back to that one Cross Examined piece because it amused me so much. Next, we’re looking at faux-experts within Christianity. It’s another busy week around here! We’ll see you then!

1 As you can guess, it’s no fun at all to be the hapless soul who gets  caught in the laser sights of a oneitis-stricken Nice Guy™.

2 And yes, these Christians get really touchy when other people aren’t as overwhelmed as they were. They get even touchier when someone pokes holes in their OTP argument, and I can see why: it’s a huge slam on their own discernment and rationality!

If you like what you see, I would love to have your support. My PayPal is captain_cassidy@yahoo.com (that’s an underscore in there) for one-time tips. I also welcome monthly patrons via Patreon with Roll to Disbelieve. Thanks! <3