The Wizard of Oz is a secular humanist parable.

I’m not the first to suggest this possibility. But the eye roll I got from my 17-year-old son when I said it at dinner the other night could have cleared the dishes from the table. He’s currently soldiering through an AP Lit class in which the teacher earnestly insists that no cigar is ever, ever just a cigar. When one of the short stories they read described a red ovarian cyst in a jar, the teacher looked searchingly at the ceiling. “Red,” she said, drawing out the syllable and shaping her next thought with her hands. “Passion.”

“OR,” said my boy in the exasperated retelling, “red — the color of an ovarian cyst!!”

So I knew I was in for it when I claimed that The Wizard of Oz isn’t just a story about a girl and her weird dream.

Frank Baum (who wrote the book) was a religious skeptic and Ethical Culturist. Yip Harburg (who wrote the screenplay and songs) was an atheist. That doesn’t mean a thing by itself, of course. But it takes very little ceiling-gazing and hand-gesturing to see the Oz story as a direct reflection of a humanistic worldview.

Dorothy and her friends have deep, yearning human needs — for home, knowledge, heart and courage. When they express these needs, they’re told that only the omnipotent Wizard of Oz can fulfill them. They seek an audience with the Wizard, tremble in fear and awe, then are unexpectedly ordered to do battle with Sata… sorry, the Witch, who turns out pretty feeble in the end. (Water, seriously?)

When they return, having confronted their fears, the Wizard dissembles, and Toto pulls back the curtain to reveal a mere human behind all the smoke and holograms — at which point they learn that all the brains, courage, heart, and home they sought from the Wizard had always been right in their own hands.

It’s really not much of a stretch to see the whole thing as a direct debunk of religion and a celebration of humanistic self-reliance. And as a bonus, Connor actually granted me the point. 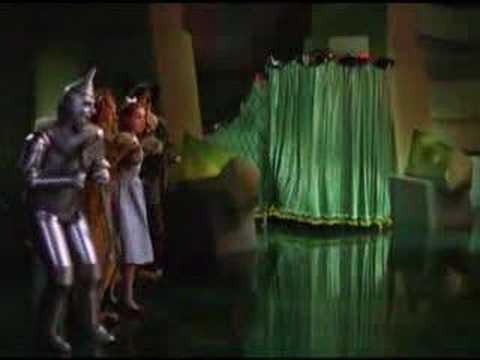