The House of Cards theme is longer: apparently it takes a full 96 seconds to piss on the last sputtering embers of your faith in democracy. Pission accomplished: 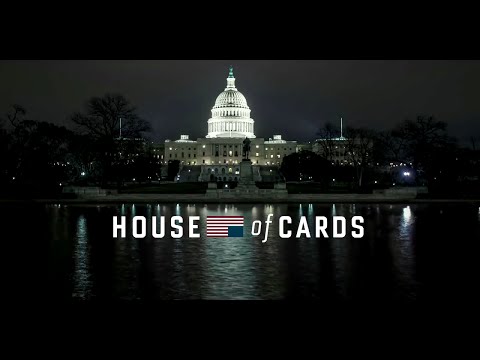 Within 4 seconds, something’s wrong. The key (or tonic, or home) is vague because we aren’t hearing full three-note chords, just two notes at a time in rising thirds. It’s like playing Wheel of Fortune — we only have some of the letters in each word, and we’re trying to figure out the meaning of the phrase.

Your brain draws on a lifetime of listening, ten thousand songs that followed the same basic rules, then uses that experience to piece together clues about where home is this time. It does this by filling in the seven slots of the scale. So far we have E, F, G, A, Bb, and C — six out of seven! — so your brain is pretty sure that F is home. That would sound like this (8 sec):

That’s where we were headed — F Major! If we got there, the show would have been Mr. Rogers instead of Mr. Underwood. Instead, right after hitting that Bb, he drops us to the ‘wrong’ key — A minor (8 sec):

The result is that Underwood feeling (8 sec):

The same progression signals each entrance to the Pit of Despair in The Princess Bride. Different key, same queasy effect (8 sec):

Back in DC, the clouds roll in, and the encroaching shadow takes the city from bright busy daylight down through dirty underpasses and into the pulsing heart of darkness. The heartbeat bass recasts the high-speed traffic as arterial blood. The heroic statues drown in darkness, in sync with the distant drums and trumpets — a bitter parody of patriotism.

By the time that heartbeat bass fades out at the end, the milk of human kindness sits curdled in the cat’s dish, the cat is dead, and Frank Underwood is talking about two kinds of pain.

That bass line stays the same from start to finish. It’s a technique called ground bass or basso ostinato — literally “stubborn bass” — a simple pattern in the bass that repeats over and over, creating a unified emotion, even as the rest of the music varies above it.

Pachelbel’s Canon in D uses the same device, this time with an eight-note ostinato. You know the tune:

The bass in the House of Cards theme is also telegraphing an emotion — and it’s pretty much Frank Underwood’s initials, if ya feel me.  The key of A minor is drilled home in the most elemental way it can, 1 to 3, A-C-A-C. Composer Jeff Beal referred to that bass as “the stubbornness of Frank,” underpinning everything and refusing to change course. The rest of the harmony is also in A minor at first. It breaks into a barely perceptible A major at 0:48, then back to minor at 0:58 before ending in that kind of heroic, operatic A major starting at 1:18.

But the “heroic, operatic A major” in House of Cards has a wee bit of poo stuck to it. Just as the Valkyrie comes in on that high A, and the strings are cranking away on the fast A major bugle call, that high violin falls through a descending melodic minor. And the wicked C in the bass is rubbing up against the happy C# in the strings. Bad touch, stranger danger!

As the major key tapers out, we’re left with Frank crapping on your happy ending (20 sec):

When I studied film scoring at UCLA, a few things were verboten. “Wallpapering” was one — that’s when the music never, ever shuts up. The composer feels the need to prime every emotional shift and even physical gestures. Very big in the 1930s-50s, not so much now.

Another no-no was “mickeymousing,” the word for music that closely mimics visual details in the scene. Steamboat Willie (1928) was the first to do it — hence the name — and Looney Tunes amped it up to 11 — think of the xylophone mimicking the Coyote tiptoeing away from the pile of Acme dynamite.

The House of Cards opening theme includes mickeymousing that actually works. It’s crisp and subtle, for one thing. Watch how the visuals are synched to the slightly jarring drum hits — sunlight flashes on the houses on the first drum stroke (at 0:11), cars halt on the second stroke (at 0:13):

But my favorite mickeymouse moment is also the best spot in the whole theme, establishing a harmony that haunts the whole series. As the train flashes by, a chord sounds, mimicking a train’s horn, synched to the visual right at 1:09:

That chord is why I took a detour to melodic minor in the last post. Remember the melodic minor scale, with the 6th and 7th raised going up and lowered again going down:

So G# and G-natural are both legal in A minor — the key of House of Cards. In this case, it uses those two clashing notes at the same time, producing a very cool dissonance that composer Jeff Beal inserts frequently in tense scenes throughout the series. Each time it’s an echo of that train, hurtling through the darkness.

More on that chord and other brilliant cues from House of Cards in a later post.