Walking from the lectern after announcing his intention to resign as Prime Minister of the United Kingdom, David Cameron did something funny: he sang a happy little tune to himself.

Well, he thought he sang it to himself. His mic was still live, so he actually sang it to the whole world: 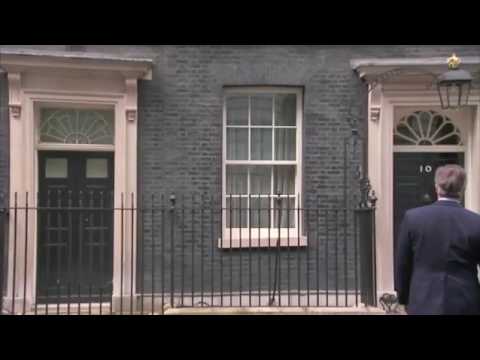 I don’t know what he meant to sing, if anything — but this is roughly what came out:

Some thought they heard a bit of the West Wing theme in that ditty, while others heard the first notes of the overture to Tannhäuser. Both were wrong in a way I’ve mentioned before. Like the alien House of Cards cue, Cameron is actually singing a bunch of 4ths — Up a 4th, down a 4th, down another 4th. The ear has a little trouble sorting that out, so we fudge the unconventional notes to form a triad instead. It’s like an aural version of pareidolia, the human tendency to see patterns that aren’t really there. The “face on Mars” is a famous example.

Cameron’s ditty is actually closer to a motif that fans of the original Star Trek will instantly recognize. It’s even in the same key (2 sec):

Push those notes through horns and the effect is heroic. But when those same notes fall from the doughy face of a Prime Minister who just washed his hands of the biggest mess in recent British political history — especially when said notes are wearing the goofy non-lexical vocables doot-doo — it can only mean one thing: I’m a happy little fella.

Chris Hollis, a guitarist in a British pop punk band, had a darker plan for those notes: turn Happy Little Fella into Evil Tory. 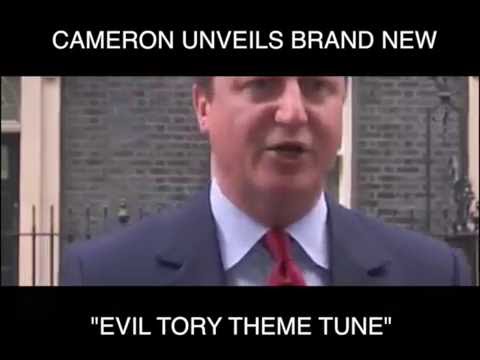 That’s hilariously awesome. But how did he turn something so happy so damn dark? The low brass, cellos, and percussion helped, but that’s not enough. If those instruments had played the exact stack-o’-4ths that Cameron sang, it wouldn’t have sounded evil:

So aided by Cameron’s tunelessness, Chris cheated, just a bit, auto-tuning the last note down a half step. As D turns to Db, Gomer Pyle turns to Darth Vader:

That tiny change has a huge effect because of one of the most counterintuitive things in music: pitches that are close to each other on the keyboard (like C and Db) are miles away from each other harmonically, and therefore emotionally.

The tonal center of Cameron’s little tune is C. By fudging the last pitch down from D to D-flat, Hollis creates a strong dissonance with C and turns a 4th (G-D) into a tritone (G-Db), one of the most dissonant intervals. He then harmonizes the whole thing as C minor – Db minor, two chords that are about as far apart harmonically and emotionally as you can get. (More on this when we get to the circle of fifths.)

In a way, Hollis did the opposite of pareidolia: he took something slightly face-like, and instead of nudging it into a face, he made it more like the yawning mouth of hell. The sudden switch from goofy to evil is comedy gold.