I just finished writing a short piece on the ways in which “atheist” and “agnostic” can both describe the same worldview: it is my considered opinion that God does not exist (atheist), and because you can never be quite sure of such a thing, I’m not quite sure (agnostic).

While doing the research, I came across a February interview in which philosopher Anthony Kenny asked Richard Dawkins why, if he admits to being less than certain, he doesn’t call himself an agnostic.

A planetary gasp ensued. The next morning, the religious affairs editor of the Daily Telegraph wrote breathlessly that Richard Dawkins, “the most famous atheist in the world…admitted he could not be sure God did not exist [and] preferred to call himself an agnostic rather than an atheist.”

Not only has Dawkins said the same thing countless times, including in The God Delusion (p. 74), but he said nothing whatever about preference. Like a Christian who is also Lutheran, he was laying claim to two entirely compatible labels. Russell did warn about putting that kind of nuance in front of a general audience, but oh well. (Dawkins has clarified, for all the good that will do.)

I read about the Dawkins flap the same day I saw a BigThink video by Neil deGrasse Tyson plowing similar ground, though at right angles to Dawkins. For nearly three minutes I was in nodding agreement with Dr. T — then, in the final seconds, he lost altitude rapidly, finally slamming hard into Mt. Misconception. Here it is with my play-by-play: 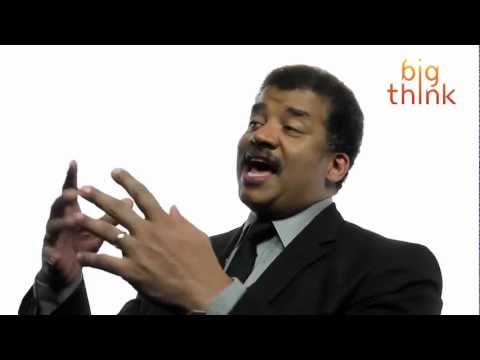 0:10 Totally cool with that. No one should force anyone else’s hand on this, ever.

0:18 (Okay, that’s unfortunate. Though you have to be careful, belonging to a movement does not have to mean leaving your brain at the door. Was there no one thinking for himself or herself in the civil rights movement? The women’s rights movement?)

1:45- He’s right — this is maddening bullshit. HE gets to choose his identity, no one else. It’s like a believer telling you you’re really a Christian, deep down. Maddening.

2:15 A really clever response to the problem. I would never have thought of that.

2:30- It’s easy to react against what he’s saying here, but listen closely. He’s talking about a pragmatic difference, and he’s right. Calling himself an atheist would be an enormous distraction from his work. Agnostic is also accurate and allows him to focus on his primary work.

Picture saying to Gandhi, “Nonviolence? What’s up with that? I don’t play cricket, but is there a word for non cricket players? Do non cricket players go on hunger strikes and allow themselves to be clubbed?” It’s a thoughtless, vacant analogy from a really brilliant guy. Tyson doesn’t have to agree that the act of stepping outside this overwhelming cultural norm is worthy of a name, but to so thoroughly fail to grasp why others might think it is, even to the point of demeaning caricature, is really hard to watch.

3:30 This is an indictment worth hearing. Tyson is not the first accomplished agnostic or atheist to say this kind of thing. It’s worth asking if there’s something we can do as a movement to make it easier for people like Tyson to stand anywhere near us without losing their ability to do their work.

I do wonder if Tyson would so easily shrug the movement away if his own area of science was still under siege by geocentrists. Nowadays it’s mostly biologists struggling to keep religious assumptions out of their work. Maybe it’s not surprising, then, that Einstein, Sagan, and Tyson have all shoved the atheist label away with great irritation, while people like Dawkins, PZ Myers, and Jerry Coyne see it as a point worth making, despite the enormous distraction from their other work.

Also: The Telegraph redeems itself a bit