The electromagnetic spectrum covers a huge span of wavelengths, from a trillionth of a meter to (hypothetically) the size of the universe. Most of this energy — gamma rays, X-rays, microwaves, ultraviolet, and so on — is invisible. But a tiny sliver is visible light:

Different wavelengths within that tiny window present as different colors. Newton first described the rainbow as having five colors — purple, blue, green, yellow, and red. He later added orange and indigo for a silly reason I’ll describe in a minute. Neither answer was wrong, and neither was right.

When I was six, my box of crayons had eight colors. By the time I was ten, there were 64. The crayonic scientists hadn’t discovered 56 more colors — they just split the spectrum into finer divisions, adding colors like blue-green and green-blue. (Some speak of a 120-color Crayola box, but the few photos that exist are suspiciously blurry.)

My first color computer monitor displayed 256 colors. The one I’m on now has the weirdly non-specific “millions of colors.” The possible colors in that spectrum are literally infinite: Just as you can endlessly divide a number line into smaller and smaller fractions, you can tweak wavelengths forever. So instead of being handed a specific natural palette, we divide the spectrum up arbitrarily to meet our needs: five colors in the rainbow, or seven; eight crayons or 64; 256 colors on the monitor, or millions; and 1500 choices in the Sherwin-Williams store. Until you mix a speck of mauve into the gallon of Carnival Orange and get 1,501.

Sound works the same as color. The range of frequencies we can hear is a sliver of the possible range of vibrations. Here’s the full range that the average human can hear, from 20Hz to 20,000Hz:

Like color, pitch is infinitely divisible, so we make choices about how finely to slice up that spectrum of sound. But one division is so basic to the physics of sound that it serves as the starting point for pretty much every music system on Earth: the octave. Give us an octave, Dorothy:

Doubling any vibration sends you up one octave, and the octave is the relationship between any note and its first overtone. It’s the strongest pitch relationship in music, and you can hear the family resemblance. In Western music, we designate that close relationship with a letter name. Notes vibrating at 110, 220, 440, and 880Hz are all “A,” for example.

So octaves are basic. But using octaves as the only musical steps would make for pretty poor music, like painting with 50 shades of grey. We want additional pitches to use, smaller divisions to give us more of the available colors. How small is the question.

There’s a slightly hilarious psych term for the amount something has to change before the average person will notice. You’d think it would be the “minimum discernment threshold” (MDT) or something similarly sciencey, but no: It’s the JND — the Just-Noticeable Difference. When my wife gets a haircut, it’s often a JND experiment for me.

The concept reaches even beyond haircuts to the perception of things like color and pitch.

That audible range from 20Hz to 20KHz is about 10 octaves. (For comparison, the piano keyboard is just over 7 octaves.) We could split the full range of human hearing into a maximum of about 1,400 just-noticeably-different pitches — 140 pitches per octave. But just as octaves are too big to be our only interval, these are way too small to make musical sense. Going from one to the next sounds more like drifting very slightly out of tune than anything musically useful.

So over time, instead of using 140 pitches in the octave that are barely noticeable in their differences, music cultures have divided up the octave into fewer, more useful and noticeable pitch differences.

South Indian Carnatic music uses the term śruti (or shruti) for the smallest meaningful interval of pitch. Some Carnatic theorists have put that number as high as 66 pitches in the octave, but Carnatic practice actually uses 22 — still a lot of small steps to Western ears. The result is some amazingly nuanced, slippery melodic contours.

Listen to the tiny pitch differences in this performance. The string drone establishes a central pitch, like the Western tonic. The singer’s voice dances in the amazingly tight Carnatic spaces around that center. Just before the midpoint of the clip, she locks in with the drone, then dances away again, returning home once more at the end (58sec):

Western music settled on 12 pitches, equally spaced about twice as far apart as the Carnatic śruti:

That’s the arbitrary paint store that provides pitches for nearly all Western music — folk tunes, opera, rock, pop, everything. It’s called a chromatic scale, which is perfect — chroma is Greek for color, and scala is Italian for ladder or steps. It isn’t music any more than a paint store is a painting. It’s the resource we draw on to create music.

As the Carnatic example shows, the octave can be divided up any number of other ways. There are big gaps between those notes in the chromatic scale, and there could be notes in those spaces, or in some of those spaces but not others. The composer Harry Partch built his own instruments to bust out of the constraints of the Western pitch ladder. Try this on for a minute: 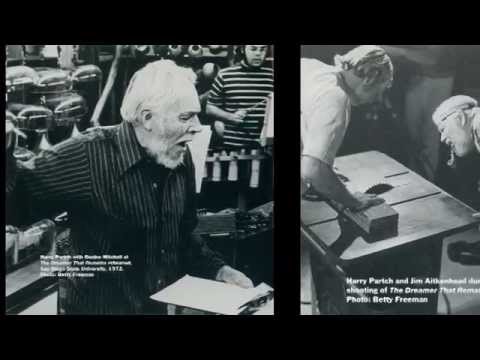 Several more recent inventions like the fluid piano and tonal plexus have also poked around in those pitch gaps. (If you love this kind of boundary-pushing, find 17 minutes for this stunning soundscape by Wendy Carlos.)

Instead of finding more pitches in the cracks of the chromatic scale, we usually go the other way, taking pitches away from the 12 and playing around with what remains. You can get a scale with steps of various sizes that way. Even the 22-pitch Carnatic system doesn’t treat all 22 as equal players in a given piece. There’s a subset that provides the melodic backbone, and the rest serve as ornaments and variants.

The seven-note major scale, by the way, is why Newton added orange and indigo to make seven colors in the rainbow. He was enamored of the Pythagorean idea of a “harmony of the universe” (musica universalis) and thought the rainbow ought to reflect the pitches of the musical scale, as well as the known objects in the solar system at the time and even the days of the week.

Never mind that the scale and the week are also arbitrary and the astronomical count turned out incorrect — it’s a thing we do, grabbing on to patterns and relationships to make sense of things. But the divisions themselves are neither right nor wrong — just useful.

More on the pitch/color connection:

The man who heard his paintbox hiss (the synaesthesia of Kandinsky)
Music for Measure: on the 300th Anniversary of Newton’s ‘Opticks’