The climactic scene in The Truman Show is so intensely satisfying that it still stuns me after all these years. One musical technique plays a big part in that.

Non-harmonic tones are notes that are not part of the chord of the moment but still make sense because they follow certain patterns. The non-harmonic tone that makes the climax of The Truman Show so devastatingly perfect is a pedal point (or simply ‘pedal’).

The rule for a pedal is simple: A note starts out as part of a chord, then it doggedly hangs on, even as the chords change around it. You’re still hearing that same note, maybe held out long, maybe pulsing in quarters or eighths. Sometimes it’ll belong to the chord and sometimes not, but regardless, it keeps sounding. That’s a pedal.

Tom Petty uses a double pedal all the way through Free Fallin’. Two notes are unchanging in the guitar, C and F, ringing straight through the song even as the chords change around them (39 sec):

Sometimes it’s just a nice effect. But a pedal point can also serve the emotional purpose of establishing reality, for better or worse — a steady insistence that we accept the situation.

One of the most stunning uses of a pedal point was in the recessional at the funeral of Diana, Princess of Wales, a piece called “Song for Athene” by John Tavener. Listen to the low F in the basses (same note as Free Fallin’).  It starts right at the beginning. Better still, hum along with that long note in any octave so you can feel the music moving around that unchanging core, moving between minor and major, dissonance and consonance, darkness and light. Go all the way to 5:44 if you can — it’s one of the most profound musical settings you’ll ever hear, especially if you hum that pedal all the way: 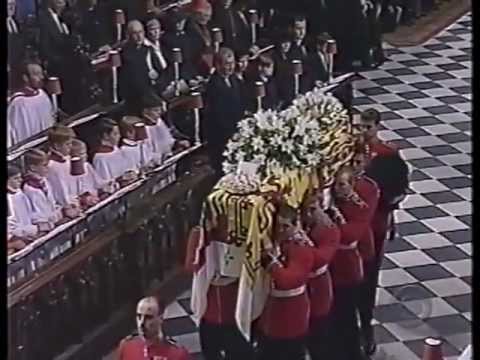 There was a feeling of unreality when the news of Diana’s death first broke. It seemed somehow impossible. Tavener’s pedal had the effect of cementing our acceptance: Oh my God, she really is dead.

Now listen to the end of The Truman Show. The pedal begins at 1:00, those steady quarter notes down in the low strings, but don’t skip that first minute to set it up:

We spent the film watching Truman struggle with uncertainty and confusion, wanting answers. When his hand touches the wall, he finally has his answer — and the pedal, the music of finality, tells us it’s true.

MORE IN FILM SCORING:
When Film Music is a Mickey Mouse Operation