You’ve probably heard of televangelists Jesse Duplantis and Kenneth Copeland, who have repeatedly defended their decisions to buy private jets. Well, a new Inside Edition investigation takes an in-depth look at these Christian pastors’ greed and luxury.

The show caught up with Copeland, the prosperity preacher who just last year said he wanted his congregation to pay for his new $54 million private jet, but his security threw the investigative reporter out. Later, in a sermon, he joked that the guards had made her “Outside Edition.”

There are many more anecdotes where that one came from: 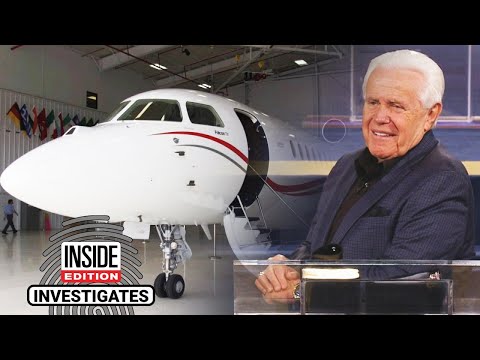 You’ve seen them on TV, popular televangelists who preach the gospel to millions of people around the world. You may be surprised that these men of God are living a lifestyle few could imagine.

Jesse Duplantis and Kenneth Copeland drive fancy cars and live inside lavish mansions. They also fly in some of the best private jets money can buy.

Pastor Jesse Duplantis zips around in a Dassault Falcon 50 jet paid for by his church. Inside Edition found him boarding his plane with his wife for a short one-hour flight from Fort Worth, Texas, to his home outside New Orleans.

Duplantis says his jet lets him spread the gospel to as many people as possible, and that God wants him to have the best plane, but it seems like he mostly uses it for personal travel. He went to Hawaii 16 times since 2006, according to Inside Edition.

And now, as we previously reported, he wants an upgrade. When Chief Investigative Correspondent Lisa Guerrero asked him about this at a book signing, she was treated with contempt and kicked off the premises.

“Hi, I’m from Inside Edition, I’d love for you to set the record straight, sir, why do you need a $54 million jet?” she asked.

“We’re not doing any kind of interviews now, I’m in a book signing,” he said.

Guerrero was then whisked away by security officials, but she persisted asking him why he needed such an expensive jet.

“I’d just like to know why you need a….” she said as she was being pulled away. “Keep your hands off of me, do not touch me. Why are you people touching me like this?”

As messed up as all of that is, Inside Edition says Copeland is worse.

However, when it comes to luxurious travel, very few people can beat Copeland, who has his own airport next to his lovely mansion in Newark, Texas. Copeland actually has two private jets, a $20 million Citation X and a Gulfstream V jet that he recently bought from movie director Tyler Perry.

He’s flown his jets to a vacation ski resort in Colorado at least 143 times since 2000.

Copeland is famous for saying he needs a private jet in order to avoid flying like everyone else in a “long tube with a bunch of demons.”

When Guerrero asked him if he really thought other humans were demons, Copeland pretended he never said the thing we all heard him say.

Leave it to a televangelist to talk about a private jet and the word “cheap” in the same sentence… While his ministry never disclosed the price, that plane costs several millions dollars on the cheap end. That’s in addition to the $2.5 million he tried to raise for upgrades and millions more he would need for a hangar.

This is such a strange case of religious extravagance that it boggles my mind. The men are rich beyond belief, something that doesn’t ever seem to dissuade their followers from giving them even more, and the public has no way of knowing how much they take in or spend because their ministries aren’t required to report that information. And it’s all tax free.