The position of Governor General in Canada is mostly ceremonial. It’s unelected and a way to link the nation with the Queen. It’s also, then, not very interesting as far as politics goes. But Julie Payette, who was appointed to the position last month, is raising some eyebrows after a speech she made at the Canadian Science Policy Convention in Ottawa on Wednesday night.
Realize that Payette isn’t some random person in her position. Her résumé includes stints as a businesswoman, computer engineer, pilot, and astronaut. She spent more than three weeks in space and became the first Canadian on the International Space Station. She takes science seriously, and she’s not afraid to advocate for it. She’s all kinds of badass.
Maybe that’s why her remarks caught a lot of people’s attention. Payette mocked astrology, joked about Creationists, and questioned climate change deniers. 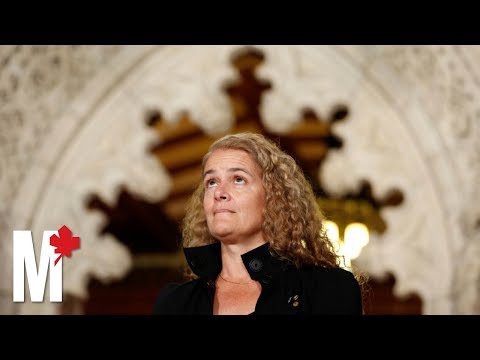 On astrology, Payette noted, with incredulity, that there are those who believe “that your future and every single one of the people here’s personalities can be determined by looking at planets coming in front of invented constellations.”
…
“We are still debating and still questioning whether life was a divine intervention or whether it was coming out of a natural process let alone, oh my goodness, a random process,” Payette said.
…
“Can you believe that still today in learned society, in houses of government, unfortunately, we’re still debating and still questioning whether humans have a role in the Earth warming up or whether even the Earth is warming up, period?” she asked.

None of this should be controversial. Not at a science conference, of course, but not to the rest of the public either. Anyone who finds her remarks the least bit offensive must be someone who doesn’t care about evidence, reason, or reality.
And yet, Aaron Wherry of CBC News is acting like Payette went far beyond her ceremonial role by pointing out facts.

Those who read and write horoscopes would be entitled to take offence. If there is a national association of astrologers, it will presumably be asking Rideau Hall [Payette’s residence] for a retraction.
…
But however strongly one feels about the science of evolution, religious belief might generally be considered sacrosanct, or at least a topic that the appointed occupant of Rideau Hall should avoid commenting on.
…
It was what she had to say about climate change that seemed most immediately interesting. Granted, it’s also possible that saying what she said shouldn’t be considered interesting.
…
… it is vital that the public have faith in the governor general’s objectivity.
It is for that reason — even more than the fact Payette is an unelected figurehead for the nation — that governors general are best advised to avoid being too interesting.

In short, Wherry says the Governor General must always be objective even when the other side is wrong. We know how evolution works. We know the dangers of climate change and the role humans play in it. We know astrology is pseudoscience. The people who don’t know those things shouldn’t be taken seriously or treated with any deference.
It’s incredible that anyone — much less a CBC News commentator — would ask an accomplished woman to dumb herself down in the name of objectivity.
What’s next? “Some people believe 2 + 2 = 5, so Payette shouldn’t dare say that it equals 4! She might offend math skeptics!”?
She didn’t say anything controversial. She was honest. Being impartial with regards to politics doesn’t mean Payette should have to pretend myths and facts are one and the same. (To his credit, Prime Minister Justin Trudeau said he was “proud” of Payette’s speech. According to CTV News, Trudeau applauded her “defending science as part of the foundation of a successful society.”)
If Wherry found her speech too “interesting” — or too biased — then the problem lies entirely with him, not the educated person on stage telling a crowd of scientists that they have their work cut out for them in a world where fake news thrives.
(Screenshot via YouTube. Thanks to Lorne for the link)