During a meeting of the Flagler County School Board in Florida Tuesday night, there was an unannounced and unexpected speaker who took the microphone and began saying a prayer.

Flagler Beach United Methodist Church Pastor Jeanine Clontz told the crowd to bow their heads and pray for everyone as the school year begins. 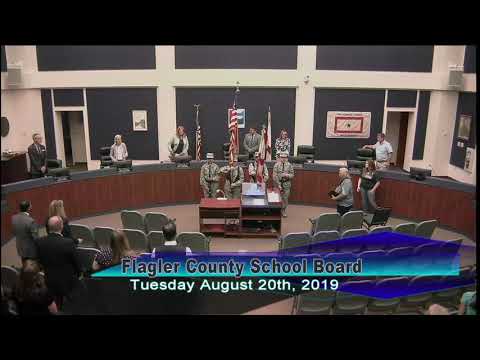 “Gracious and loving God, we call on you to surround all of our schools here locally and around the nation with your protection,” the pastor said, going on to pray for protection from acts of violence and bullying, with words for educators to be “filled with grace,” before she told the audience, as at a service: “You may be seated.”

Where the hell did that come from? Who invited her? Most of the board members had no idea until the board’s chair, Janet McDonald, fessed up and admitted this was her doing — and that she hoped it would be the start of a new tradition.

[McDonald] said that the pastor was “starting off a new tradition, I hope, to include the members of our faith communities and our support communities out there.” McDonald couched the idea in terms of organizations providing resources. “One of the big initiatives we have is the mental health and personal wellness initiative, and I think our faith community plays a big part in that.” Such organizations have never been barred from sharing their message with the board, either in public comment periods or, if the board agrees, through agenda items.

In short, the chair of the school unilaterally decided to let a pastor proselytize at the start of a meeting. It’s blatantly illegal. It could lead to a lawsuit — which this school district would lose in a heartbeat. And it sends a clear message that anyone who doesn’t want to bow their heads or otherwise waste their time is somehow not welcome at these meetings.

While the Supreme Court has said religious invocations may be permitted at local government meetings, the rules are different at school board meetings since children are involved. More importantly, even if invocations are permitted, they must be open to everybody who wants to speak. So McDonald better be saying yes to any local atheist or Satanist or Muslim or Hindu who decides to make the most of a captive audience by advertising their religion.

And, yes, advertising is apparently a part of this. After Clontz did her religious song and dance, she made a pitch for everyone to join her church:

… after she offered the invocation, Clontz went on not so much to proselytize as to pitch her church — a violation of Flagler County School Board rules, which forbid solicitation: “Our church is a church that knows that ministry happens when we leave the walls of the church, it happens out in the community, and so everything that we do at Flagler Beach United Methodist is open to the community.” She then outlined the church’s offerings, from cancer care to homeless outreach to volunteer work.

I’m sure her church does some fine work in the community. It doesn’t matter. A school board meeting isn’t meant to be free advertising for someone’s personal brand of superstition.

The board’s attorney, Kristy Gavin, seems to understand this since she did a double-take after the surprise prayers. For now, she’s gotten the board to add the invocation matter on the agenda at a future meeting, so it can be discussed. Though even she seemed to think the Supreme Court’s ruling in Greece v. Galloway allowed school boards to play Religious Roulette. (She’s wrong.) Still, she admitted that if invocations were allowed, the board would have to let anyone speak.

I promise you atheists will take full advantage of this opportunity if the board moves forward with this practice — which, again, would almost certainly be illegal. I’ve alerted people who may be in a position to do something about this.

What McDonald did Tuesday night was completely irresponsible. Not just from a legal standpoint, since she’s putting everyone (including taxpayers) at risk, but also as a leader, since it shows she doesn’t give a rat’s ass about all the non-religious and non-Christian students in her district. She doesn’t seem to care for her colleagues either, since she sprung this on them in real time. She seems to think a local religious leader can and should represent the entire community and that everyone wants to hear a pastor say some magic words to begin a meeting when they would all be better off just getting down to business. That’s what they were elected to do.