Matt Powell, the 22-year-old budding hate-preacher who has said the government should execute gay people because the Bible says so, has some advice for women: Stop dressing like whores. 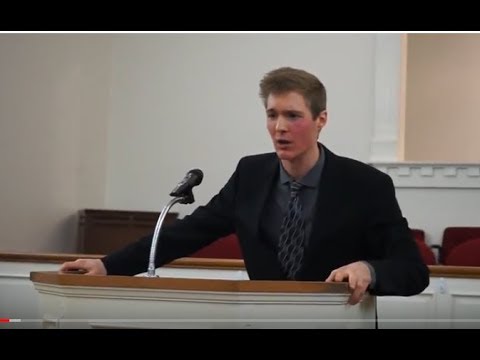 … I’m a single man. I’m not married. But I want to say to the young ladies, a lot of times, 2018 America and the media is saying, you know, with their enticing words like the Bible says to watch out for, “Oh, go ahead and dress like a whore! You’ll attract a young man that will be loyal to you! Just dress like a whore! Go get a bunch of tattoos all over yourself. Go ahead and get drunk. Go ahead and do drugs. Go ahead and wreck your life, and make your face look like you fell out of a fishing tackle box. Make yourself look this way, and then a young man will like you.”

Did you know the Bible says that true men of God — and somebody that’s going to be loyal to you, young lady — will not want anything to do with somebody that, number one, is not safe, but number two, lives that kind of filthy disgust–it’s disgusting! You know, young people, that’s a word you need to add in your vocabulary: Disgusting.

It’s disgusting when I see a whore. It disgusts me. It’s gross.

And they’re like, “Oh,” you know, “Why does one guy just hook up with me one time and that’s–” Well, ’cause you’re dressing like a whore. You expect some loyal guy to be like, “Oh, I want that girl”?

1) It’s news to me that the media has been encouraging women to “dress like whores,” get tattoos, and get wasted in order to attract loyal men. (What shows does Powell watch…?)

2) Powell really needs to define “whore” because, for all I know, he applies the term to women wearing shorts, yoga pants, bikinis, anything that’s not a burka, or tops that reveal their Mormon porn-shoulders.

3) If women dress the way Powell wants them to, will they attract men like him? Because that argument isn’t as effective as he seems to think it is.

4) In his world, no men seem to exist who care about what women think and say and do. It’s all about outward appearances.

5) The most sensible thing he said in that clip was that everyone, himself included, has been brainwashed.

Powell apparently wants to challenge me to a duel debate, but his rhetoric is why I wouldn’t do that. There’s nothing to discuss with him since he’s already decided women should be judged by the way they dress and gay people deserve death. (I supposed we could argue about whether or not all atheists are Coke-drinking video game addicts… though it would be a very short conversation.)