Last summer, a former employee of the Creation Museum, Ariella Duran, explained the “toxic culture” of that work environment in a lengthy Facebook post. She worked for Answers in Genesis for just over two years in “every single existing department,” finally leaving in 2017 for a variety of professional and personal reasons. She wrote about how she “witnessed rank partiality and favoritism, nepotism, inconsistent or non-existent communication, bullying, and spiritual abuse,” adding that Ken Ham had “built his legacy on the bones of employees he has knowingly driven into the ground.”

Among the many complaints were the complete lack of work-life balance — how employees were expected to spend long hours working because they believed in the mission of the group, despite the low pay — and unreasonable work requests, like standing outside in the heat with virtually no break and no real notice beforehand.

AiG never responded to her post. They never publicly acknowledged it. They never seemed to make any changes in response to what she wrote.

And now another former employee is speaking out about similar treatment.

Back in March, Leah Jessie wrote about how she began working at the Creation Museum in 2016 as a seasonal employee. She eventually left in December of 2019, when she was a “technically full time employee.” She wanted the job specifically because she grew up on Ham’s books and content and was excited to join a Christian ministry. While there were plenty of good memories from her time there, she pointed out a number of concerns:

June 2017. The Creation Museum is open on Sundays, and most employees who work on Sundays are unable to attend church, which forces hypocrisy because they are required upon hire to sign a statement promising to faithfully and regularly attend church.

May 2018. Once when my car was broken down, a workmate who happened to get off work at the same time as me gave me a ride home. I’ve known this man for years and have always felt completely safe and comfortable with him. He got into trouble with management for it for zero reason other than that he was alone with a woman, and was forbidden from giving women rides in the future, even when off work.

It would’ve been okay if it had been his own choice, but it was nonsense for AiG to force the Graham rule on him. It resulted in inconvenience for me, and totally unnecessary shame for him.

Those are just a couple of the problems she raises in the post. Simply put, she was put in positions that no employee should ever have to be — including times that resulted in physical pain — and her requests for changes weren’t taken seriously. When her colleagues treated her kindly, they were often punished for it.

While there are some Christians who work at AiG, I do not consider it to be a Christian organisation.

That’s about as damning a review as someone could give the place.

And now Leah has spoken about her experience with YouTuber Paulogia. 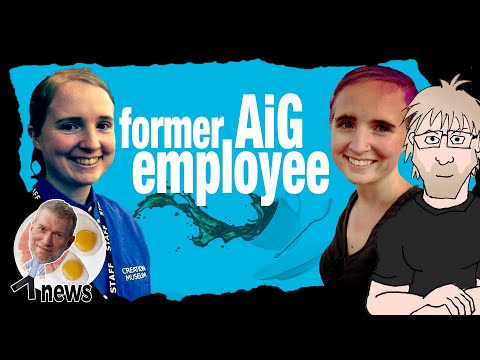 One thing I was both shocked and not-shocked by: Leah notes that one AiG staffer saw Ariella’s post and left a comment basically saying “I’m so sorry this happened… I’m praying for you.” That person was later reprimanded by AiG for commenting on the post.

Leah says she fears AiG is even watching this video now, despite her no longer working there, which is why she’s taking care not to mention the names of anyone who helped her out or showed any sympathy for her. The work culture there is just frightening.

She also repeated something she mentioned on Facebook: Ham’s entire career has been built on this idea that people must accept a literal interpretation of Genesis — Young Earth Creationism and all — because if that domino falls, all of Christianity will crumble. But Leah says when she’s spoken to atheists, which she does often, they almost never say they left the faith because of evolution. Maybe that’s one factor, but it’s never the only one. She says hypocrisy and abuse are far more common reasons people give for walking away — and her experience at AiG had both.

One last point she mentions: Some people responded to her Facebook post negatively, saying it reflected poorly on Christianity. But Leah says — rightly, I would argue — that “it’s the mistreatment and abuse that brings a bad name on Christianity, not someone talking about it.”

It takes a lot of courage to speak up about this kind of mistreatment, especially when it’s clear Leah’s not trying to criticize Christianity itself. Here’s hoping other employees and future employees hear what she’s saying. And maybe one day, Ham’s own leadership team will take these criticisms seriously.

Leah has since moved to another part of the country and found work elsewhere. Good for her. I hope she’s able to find a better path forward with employers who actually care about her well-being.

By the way, after Leah posted about her experience online, Ariella praised her for it and wrote, “I’ve known and worked with Leah in the past — one of the kindest, most hard-working people you could meet.” That’s some high praise right there.