In the wake of the Parkland school shooting, one of the most useless responses came from Florida State Rep. Kimberly Daniels, a Democrat, who proposed a bill to force every school in Florida to display the phrase “In God We Trust.” As if that would stop all future massacres.

That bill breezed through the House and now awaits a vote in the Senate.

This is the same legislator who once prayed on camera for witches and warlocks to “be fired” because of all the damage they were causing.

And then there’s her official Facebook page, which is filled with religious proclamations.

You would think that’s enough WTF for one person. But the Freedom From Religion Foundation has compiled several clips featuring Daniels saying things that, frankly, make you wonder how the hell anyone voted her into elected office. 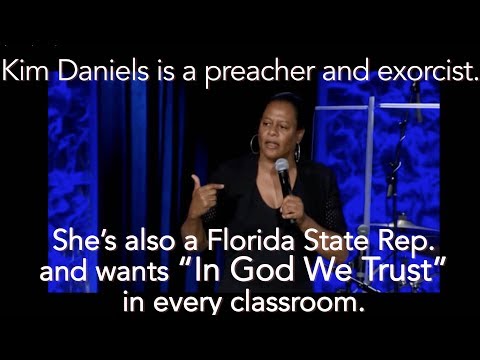 Maybe it’s “You can talk about the Holocaust, but the Jews own everything!”…

Or maybe “I thank God for slavery… If it wasn’t for slavery, I might be somewhere in Africa worshipping a tree.”

Or maybe it’s the one at the end, where she tells a church audience how absurd it is that she’s an elected official: “That’s crazy! A demon-buster that write laws!”

Those clips weren’t hidden. They became an issue in 2011 when she was running for the Jacksonville City Council. But she managed to get enough support despite those videos to win a seat. She used that success to get into the Florida House.

I can’t believe I’m saying this in 2018, but this Democrat needs be voted out of office so a more sensible voice can take her place.