The Nebraska Board of Education released a revised draft of their health standards earlier this year, which included sections on sex education. After pushback from conservatives who felt the standards were too progressive, the board modified — watered down, I should say — the standards and released an updated version this past week.

This version makes little reference to sexual and gender identity. It also removed sex education as part of the proposed curriculum for students from Kindergarten through high school.

It flat-out removes words like “transgender,” “homophobia,” and “birth control” from the curriculum, along with medical names for certain body parts.

How strong can a state’s health education standards possibly be when they overlook LGBTQ issues and omit sex education?

The Board of Education held a public meeting to discuss those revisions yesterday, and the audience included a mix of conservative Christians defending the new not-even-close-to-comprehensive standards and sensible voices pushing for state officials to do better.

One of those sensible voices was State Senator Megan Hunt, the only openly non-theistic legislator in the state. I’ve told people before that Hunt is one of the few lawmakers in the country who makes me rethink my cynicism about politics, and her brief speech at the meeting yesterday was a perfect example of why I admire her so much. She wasn’t afraid to call out the bad actors, debunk misinformation, and make clear how a comprehensive curriculum would have helped her growing up. 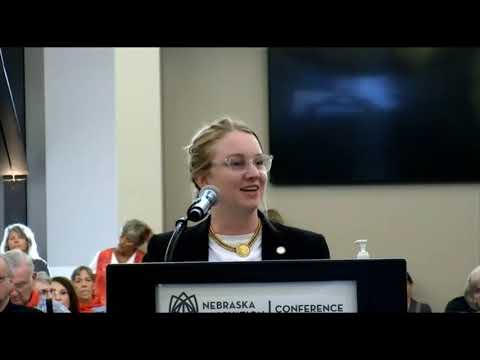 … Good morning, everybody… I’m Megan Hunt. I’m from Omaha, Nebraska. I’m a state senator, and I represent the neighborhoods of Dundee and Benson and Keystone in midtown Omaha, and I’m here to give some of you some political courage that I know that you have, but perhaps you aren’t standing in when it comes to the opportunity to update the health standards for our students.

In 2018, I was elected as the first out LGBTQ state senator in Nebraska’s history, and I am a mother to a public school student. I am a rape survivor. And I can’t help but think about the arc that my life has taken, and how different it could have been if I had had comprehensive health education growing up. The types of things that I wouldn’t have had to deal with — the depression and the anxiety that so many other kids deal with today.

And I’m here to speak on behalf of so many of those kids who cannot be here today. And I’m just in awe of the students who have already spoken, and who have come here to Lincoln today to speak to their Board of Education — You know how nerve-wracking that can be for young people? Especially in the face of Christian adults who are behind me laughing at them? And I say shame on them for that.

So let’s talk about the reality: Parents still have the ability to homeschool, and they have the ability to send their kids to private and alternative schools, which many of them are. And parents will be able to opt out of this curriculum if they want to. The standards don’t dictate that one way or another. And this is universally the practice.

The second draft of standards has a whole introductory paragraph about parent involvement, so any concern about lack of parental control is not valid. Finally I want to give you some courage about the legislature. We are a second branch of government. [Crowd: Stop!]

The Christian would like me to stop. Thanks everybody.

Just amazing. My jaw dropped hearing her defend the brave students while condemning the Christians jeering those kids. It wasn’t a frivolous attack. It wasn’t anti-Christian either. It was pro-science and pro-education. In fact, in the description accompanying her video, Hunt laid out her concerns about the new standards:

The opposition wants us to teach values, but just their values. However, that is not the role of a public school system, and we have 304,000 children to keep safe, alive, and thriving. Research shows that medically and scientifically accurate sex education decreases the number of teen pregnancies, decreases the incidence of abortion, and delays the average age when students begin engaging in sexual activity.

It’s not too late for the Board to revise the standards back in the right direction. But doing so will mean standing up to the conservative Christian zealots trying to shield children from useful, factual information. It would be a disservice to students if they abdicate that responsibility.

Public schools aren’t required to accept the state’s standards — they can substitute their own — but what state officials say carries a lot of weight.