Rapper Kanye West spoke at Joel Osteen‘s Lakewood Church in Houston earlier today, and, as expected, it was nothing more than a publicity stop for Kanye’s new Christian-focused career shift.

There were no serious questions. Nothing West said was challenged. Osteen just asked some leading questions and handed over the microphone. West just sold himself as the next Messiah to an audience that will eat up anything that’s said on that stage as long as they hear Jesus every few words.

But along the way, he suggested wanting forced prayer back in public school, said that God is now speaking through him, and showed why someone really needs to buy him a dictionary. 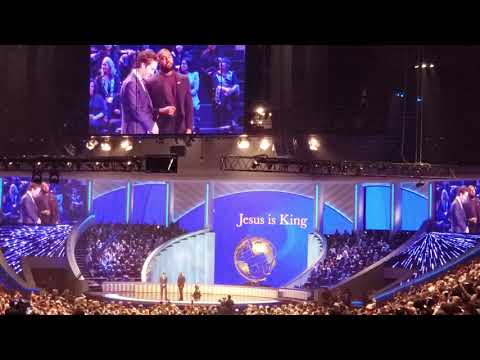 Here are a few of the highlights:

Kanye says God is now speaking through him, so audience members need to shut the hell up:

… I go into these streams of consciousness when I’m talking, and when you’re speaking in the middle of it, it distracts me. I really appreciate the support, but I would like for everybody to be completely silent so I can let God flow through me as I speak to you guys today.

Kanye, unaware of what the word “traffic” means, says strip clubs are involved in sex trafficking because owners want to know how much traffic they had each day.

… when I’m in California, or when I’m in Vegas, they got posters up advertising, you know, sex trafficking. Because if there’s an advertisement for a strip club, that is advertising sex trafficking, because at the end of the night, when they close up, the manager says “How much traffic do we have?”

Kanye, in desperate need of a dictionary, thinks alcohol is of the Devil because it’s called a “spirit”:

We all end up participating [in the Devil’s playground], whether it’s the spirits that get advertised to us all the time. Alcohol is… they call it a spirit. So we get constant advertisement for spirits…

… all of that arrogance and confidence and cockiness that y’all see me use before, God is now using for Him.

Kanye says God is finally taking back all the best artists. By which he means himself.

Kanye has never heard anyone criticize an athlete.

On that last one, it should be noted that literally no one has ever taken prayer out of school. Not now. Not decades ago. It’s not on the atheist agenda, I assure you. People can still pray whenever they feel like it.

What’s illegal is when teachers or administrators force students to join along in an explicitly Christian prayer — just as it should be.

As for the rest of it, it’s not all that surprising coming from West. Christianity hasn’t changed him because he’s always been this ignorant and this cocky. But he just found a new audience willing to eat up whatever he’s serving them.