Back in March of 2020, Christian scamvangelist Kenneth Copeland insisted that COVID was “finished.”

He even spit on it and said the virus was “destroyed.” 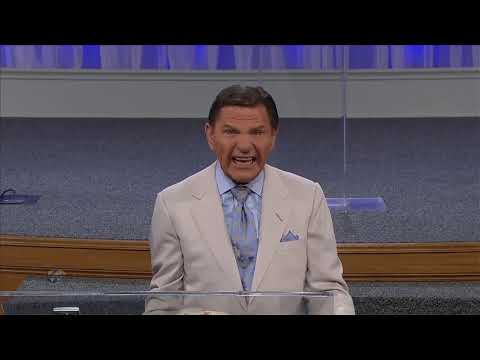 I blow the wind of God on you! You are destroyed forever. And you’ll never be back. Thank you, God. Let it happen. Cause it to happen.

And yet the virus didn’t listen. Who could’ve guessed. That must be why Copeland called into a service hosted by his daughter Terri Pearsons and her husband George Persons in order to let everyone know COVID was really destroyed this time.

His evidence? Something about a “blanket of blood” and a “golden cloud”… who knows. You try and make sense of it.

Via phone during a service on Sunday, Kenneth Copeland said he saw “a blanket of blood” but angels criss-crossed over a “golden cloud” that came out of it, and he knew “the final takedown of this synthetic virus that has been made by men as a weapon has fallen, it’s destroyed” pic.twitter.com/df5WO55Vci

And then a golden layer — just so gold it was hard to — this golden aura and cloud — a golden cloud — right on top of the blood. And then I realized that it came up out of the blood, and just stunningly beautiful.

And then angels began to criss-cross over the top of all of that. And these golden rainbows came up out of that.

And I saw all of the healing, the healing of lungs… and then the Scriptures this morning as they came out of that song, and then the lungs, and breathing you, breathing God down into our lungs. And people rising up. And I knew in my spirit, and I said it out loud with my mouth, “Our breakthrough has come. And glory to God, the destruction, the final takedown of this synthetic virus that has been made by men as a weapon has fallen. It’s destroyed”…

“It’s destroyed,” said Copeland, of a virus he declared dead more than 600,000 American deaths ago. His bizarre delusional fantasy sounds like he just spent time with Kat Kerr, and yet the audience in that room just ate it up like it was perfectly normal and true.

What’s the vaccination rate like in that audience? I’m guessing not that high. For more than a year, they’ve been listening to Copeland tell them the virus is nothing, only to witness countless people dying from COVID, and yet they’re still listening to Copeland. That’s religious brainwashing in a nutshell. Not even preventable death will steer these people away from their God-guided cult.